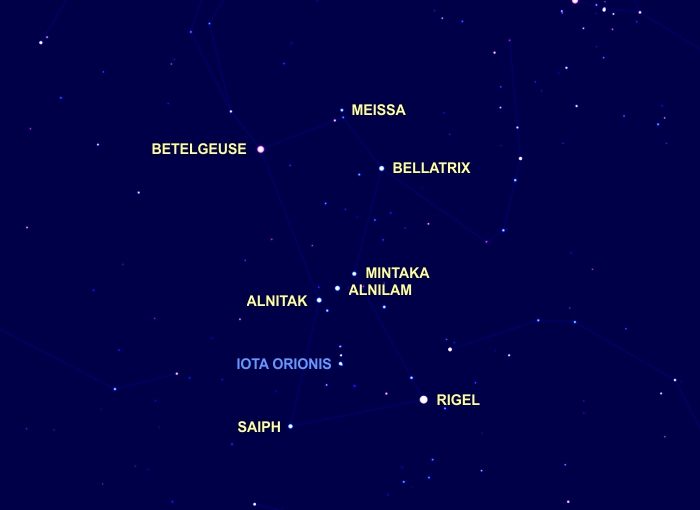 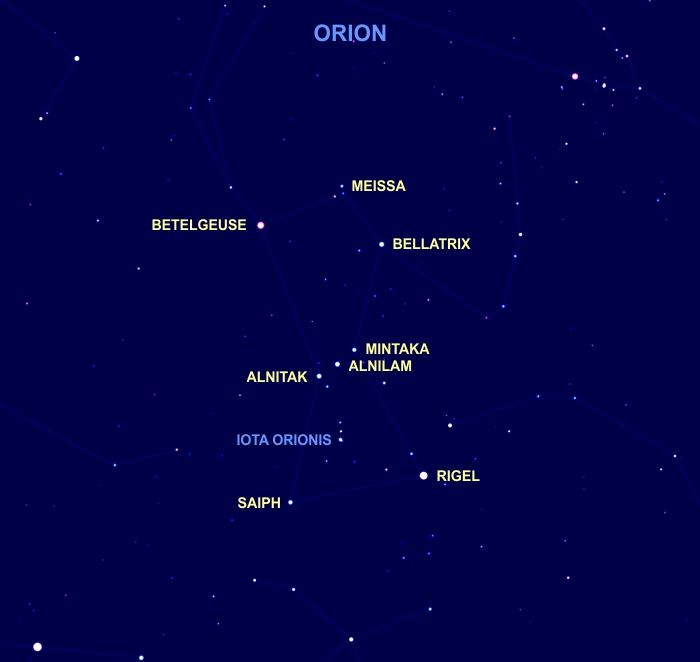 Question: We started an astronomy lesson in school and we got these charts that show the stars and constellations. What’s with all the strange names? I’m not even sure how to pronounce some of them. And lots of the stars don’t even have names. — AP, Tucson, Arizona

Answer: Nobody knows who named the stars and constellations. Most of the names were assigned by early Greek and Arabian astronomers. Many of those names have symbolic meanings. For example, the main graphic shows stars in the constellation Orion. “Orion” was the Greek god of hunting. The shape of the constellation imagines a hunter with shield and club raised. A sword hangs from his belt.

The stars in Orion also have symbolic names. The name “Rigel” comes from the Arabic and means “foot”. “Alnitak” translates to “girdle”, and “Mintaka” to “belt”. “Alnilak” is derived from the Arabic expression for “string of pearls”.

I agree that pronunciation of some of these astronomical names can be nonintuitive — I sometimes hear astronomers get them wrong. To help beginners get them right, I’ve created a document in PDF format that covers most of the names you’ll run into. You can download it here.

It’s important to note that every early culture on the planet had their own names for the stars and constellations. When you look up at the night sky, it’s just a natural thing to see patterns in the stars. The eye and brain connect the dots to make pictures of familiar things. And back then, before artificial lighting, you could see a LOT more stars than today. Take a look at Sky Lore of the Hopi Tribe for an example of how other cultures interpret the shapes of star patterns.

When you get to the fainter stars (and there’s plenty of those) you won’t find many proper names. Every star you can see, and even the stars you can’t see, have at least an alphanumeric designation in the astronomy database. For example, the star Iota Orionis (labeled in blue) is named “Iota” (the ninth letter of the Greek alphabet) because it’s the ninth brightest star in Orion (genitive case Orionis). Of course, you run out of Greek letters after the 24th brightest star, so the 25th brightest star is named “25 Orionis”.

So all those points of light you see on star charts have “names” of one sort or another, but to avoid too much clutter and improve readability only the names of brighter stars are shown.

Since you can’t see all the stars on the charts these days (unless you are in a very dark place) not many of the constellations look like what they are named. So we’ve made up a lot of new names for the groups we can see. These are called “asterisms” (subsets of the whole constellation). A good example is the Big Dipper. It looks like a cup with a handle, but is actually part of a larger constellation called Ursa Major (which means “big bear”). But it doesn’t look much like a bear unless you can see all the fainter stars.

Thanks for the excellent question AP. If you want better (interactive) “charts” that can tell you the name of any star you click on, as well as info about the star itself, I highly recommend the open source app Cartes du Ciel (Sky Chart). I’ve been using and recommending it for years.

Next Week in Sky Lights ⇒ Anemometers on Moving Vehicles