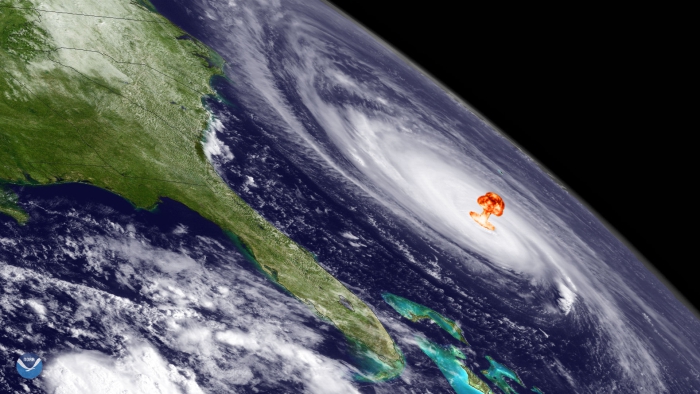 Question: Why not use nuclear weapons to destroy hurricanes while they’re still far out at sea?

Several readers have asked that question. In the past, I’ve politely responded to those queries with a link to NOAA’s FAQ page for the official answer. However, now that we have high-ranking government officials asking that same question I think it’s time to address it.

The main graphic shows Hurricane Florence bearing down on Florida in August 2018. The visible circulation extends to 650 km (400 miles) in diameter. The width of the Florida peninsula is 80–150 km (50–100 miles). At the low angle of this satellite photo, perspective distorts their relative sizes.

For the proposed nuclear explosion I used a mushroom cloud approximately scaled to the size of the Tsar Bomba explosion. That cloud was 65 km (40 miles) tall and extended a comparable distance horizontally. It was visible from a distance of 1000 km (620 miles). The shock wave circled the Earth three times before dying out. The main graphic shows this detonation superimposed on the eye of the storm.

Tsar Bomba looks pretty impressive on paper. It literally fills the eye of the hurricane. You’d think a blast that size would at least make a “dent” in the storm. Ironically, it could actually add energy to the storm, increasing its intensity and wind speeds. To understand why, we need to look at how a hurricane forms and what keeps it going. 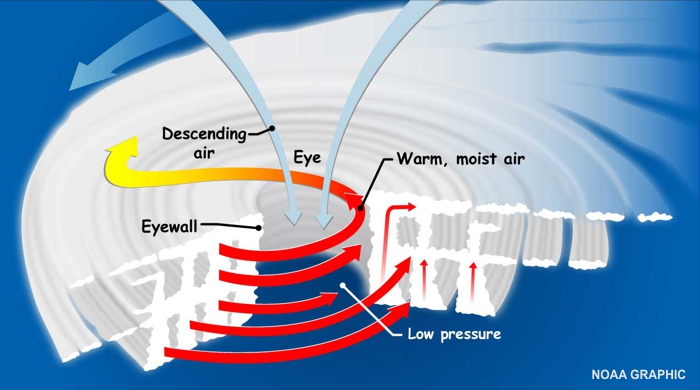 The graphic above shows the internal structure of a hurricane. Vectors indicate how multiple components interact to fuel these large rotating systems. Here’s what it takes to start them spinning:

And now we can understand why “nuking a hurricane” is a really, really bad idea:

So is there anything we could do to stop a hurricane?

The US government funded an attempt from 1962 to 1983. Dubbed STORMFURY, the experiment involved seeding the rain bands with silver iodide to cause premature condensation and interfere with eye formation. That experiment produced no statistically significant results, used up tons of expensive silver iodide, and was widely considered a failure.

Some scientists have suggested floating a layer of biodegradable liquid polymer on the ocean surface. This would inhibit the evaporation of seawater that fuels hurricanes, but the area of ocean needed to be covered makes that impractical. Others have suggested pumping cold water from the deep ocean to mix with the warm surface water. That would reduce evaporation, but would also wreak havoc with marine ecosystems by redistributing nutrients. And whatever the “fix”, we always come back to the First Law of Thermodynamics.

Given current technology there’s really no way to stop a hurricane, much less eliminate them. The best we can do is stop burning fossil fuels. Even then, in a healthy climate, hurricanes will still happen — but when they do, they’ll be less frequent and less severe.

And Now For Something Completely Different
Q&A: Cassegrain Optics

2 comments on “Nuking a Hurricane”