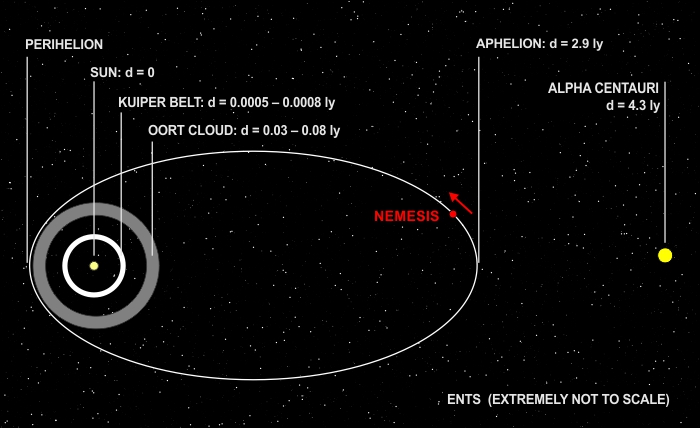 Question: There was an article on Space.com about something called Nemesis. It’s supposedly another star that orbits the Sun, and they said it could cause extinctions when it comes too close to us. How could another star orbit the Sun? And if one did, wouldn’t we be able to see it? — CL, Billings, MT

Answer: The Nemesis hypothesis has been around since 1984, when its existence was suggested as a way to explain periodic mass extinctions seen in the fossil records on Earth. The hypothesis is based on three compelling pieces of evidence: 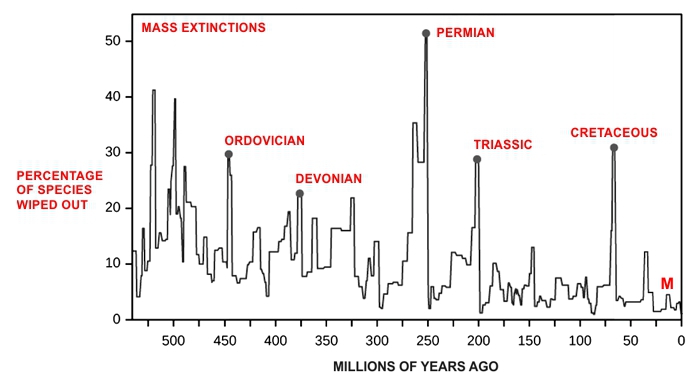 The hypothesis imagines Nemesis in a highly elongated orbit with a period of 26–27 million years. At perihelion (closest approach to the Sun) Nemesis skims by the Oort Cloud, a vast spherical shell of debris left over from the formation of the solar system. The gravity of Nemesis disturbs this orbiting debris, causing a “hail storm” of ice and rock to plummet down into the inner solar system impacting Earth and other planets. This storm could last anywhere from 100,000 years to 2 million years, increasing the odds of Earth being hit.

The graphic at top shows a highly simplified (and not to scale) diagram of the orbit of Nemesis, along with the Oort Cloud and other relevant components. Alpha Centauri is shown to provide a sense of scale — if the aphelion (farthest point from the Sun) of Nemesis were indeed inline with this prominent star, Nemesis would be pulled out of its orbit and “stolen” by Alpha Centauri. Note the distances are all given in light years (ly) where 1 ly = 9.5×1012 km = 5.9×1012 miles.

We can use Sir Isaac Newton’s theory of gravity to calculate the size of Nemesis’ orbit based on its orbital period (the time it takes to complete one orbit). The average orbital radius is:

Elliptical orbits are described by two distances: The distance of closest approach to the Sun is Rp (perihelion radius) and the farthest distance is Ra (aphelion radius). The average distance Rave (calculated by Newton’s formula) is the simple arithmetic average of Rp and Ra. If we assume that Rp is just outside the Oort Cloud, then we can calculate Ra as:

That’s far enough out for Nemesis to be captured by Alpha Centauri, or possibly perturbed by other nearby (or passing) stars in our neighborhood. And that’s one of the arguments against the Nemesis hypothesis. Of course, we don’t know if Rp is farther outside, or even inside, the Oort Cloud, but perihelion anywhere in that range would suffice to cause gravitational destabilization of orbiting debris.

If Nemesis does exist, and if it’s still in the same orbit, we can expect the next “hail storm” from the Oort Cloud around 12.5 million years from now. That’s why the top graphic shows Nemesis slightly past aphelion. Whether it will be an “extinction event” remains to be seen.

Some scientists believe we’re already well into the next extinction event. It’s been named the Anthropocene Extinction and it’s being caused by climate change, over-harvesting of resources, and the destruction and pollution of ecosystems. The Greek root anthropo credits human activities for triggering this extinction.

I believe we’ll avoid extinction, and by the time Nemesis returns (if it returns), humankind will have colonized worlds around other stars and secured our species’ continuity. NASA’s Advanced Propulsion Physics Laboratory is already researching exotic engines that could make interstellar travel a reality, and 12.5 million years is a lot of time for R&D.

Next Week in Sky Lights ⇒ And Now For Something Completely Different

Q&A: Electric Airplanes
And Now For Something Completely Different
HOME