Question: When Hurricane Barry hit New Orleans in July they were saying how the storm surge caused water in the Mississippi River to rise. I have a hard time visualizing how that works. Is it because the storm surge stops the river from emptying into the Gulf and backs it up? — BR, The Big Easy

Answer: Nothing can stop the Mississippi. A storm surge will “lift” the river near its mouth, but it won’t decrease the river’s discharge into the Gulf of Mexico. The graphic shows what happens when river meets surge.

My graphic oversimplifies the topography by portraying the Mississippi as a single stream of water entering the Gulf at a single point. This model ignores the river’s complex branching delta, but it’ll suffice for our purposes. Note how freshwater flows over seawater where they meet. Freshwater has a density of around 1000 kg/m3, compared to seawater’s 1029 kg/m3, so the freshwater floats on top.

There is some mixing at the fresh/salt interface due to turbulence and diffusion, but the bulk of the freshwater rides over the seawater as it moves out into the Gulf. Once it leaves the mouth of the channel and can spread in all directions, the layer of freshwater rapidly decreases in thickness. Surprisingly, this ever-thinning layer can extend as far as Florida before it becomes completely mixed.

A storm surge at the mouth of the river moves upstream for a distance that depends on the height of the surge and the slope of the channel. Given the river’s average slope of 0.11 m/km (0.60 ft/mi), a storm surge of 8.5 m (28 ft), as happened during Hurricane Katrina, would push seawater upstream by 77 km (47 miles). In practice, it’s a bit less because of drag from the freshwater flowing seaward.

New Orleans and other river ports, as well as populated and agricultural areas along the river, are protected by levees of various heights. You can see in the graphic that, where the channel is contained, the height of the surge adds to the height of the river. This effect is greatest at the mouth and decreases to zero at some point upstream.

In July 2019 the Mississippi was still draining water from rains earlier that year across the Midwest. It was flowing with a depth of around 5 m (17 ft) through New Orleans, compared to its nominal depth of 4.2 m (14 ft). The storm surge from Hurricane Barry peaked around 0.3 m (1 ft), so the total river depth at that location was near 4.5 m (15 ft). This was within 1.5 m (5 ft) of topping existing levees.

As ocean levels continue to rise, downstream levees will be increasingly threatened. In addition, when the plume of seawater extends far enough upstream, aquifers fed by the river can be polluted with salt, rendering them useless for irrigation or drinking without expensive treatment. This is already happening in many parts of Florida. 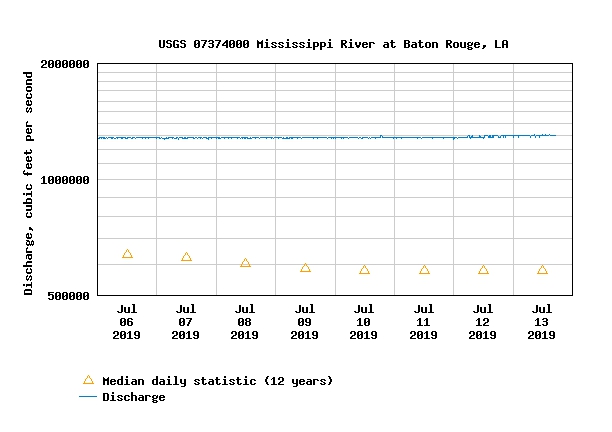 Next Week in Sky Lights ⇒ What Keeps the Moon From Falling