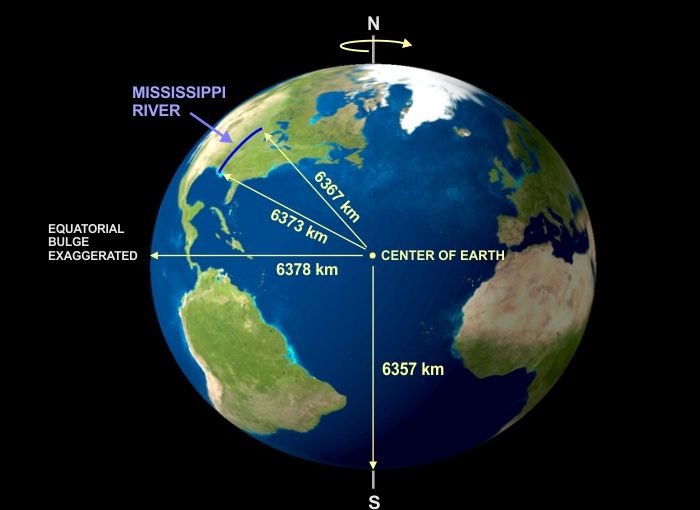 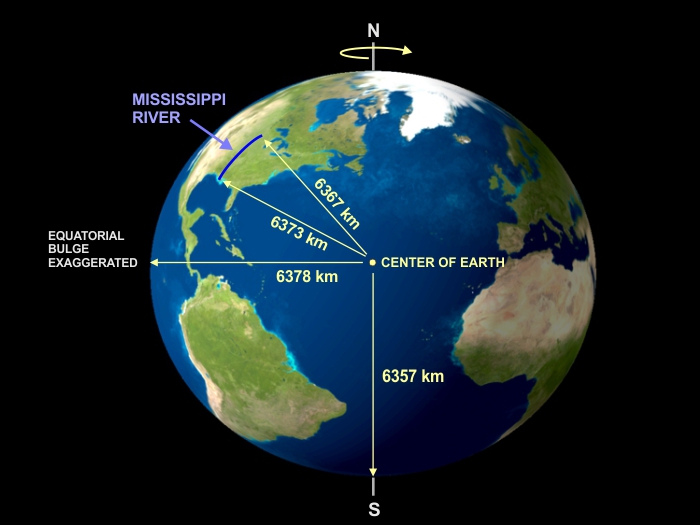 Question: I was reading about all that bad flooding along the Mississippi River, and I followed some links to a website where they claimed this river was actually flowing uphill. They said something about the Earth not really being round, but I didn’t get what that had to with flooding. Might this uphill flow be caused by all that extra flood water? Even then it doesn’t make much sense. — HF, St. Petersburg, MO

Answer: I hate clickbait that draws you to a website with preposterous teases. Yes, it’s “true” that the river flows uphill — IF you use an unconventional definition of “uphill”, and no, it has nothing to do with the recent flooding. The graphic shows how “uphill” might be so defined.

Because Earth rotates, objects on its surface feel a centrifugal force (Fc), same as what’s felt by a rider on a merry-go-round. Fc decreases with latitude and is zero at the poles. But even at the equator, where Fc is greatest, it’s negligible compared to gravity.

At the equator, the strength of Earth’s gravity is 9.78 N/kg and Fc is only −0.02 N/kg (negative because it opposes the downward pull of gravity). It’s a small effect, but because of Fc you weigh less at the equator than at any other latitude.

Despite its relative weakness, the centrifugal force is acting on a lot of mass in the Earth itself — some 6×1024 kg. As a result, Earth “bulges” at its equator into the shape of an oblate spheroid. And that bulge is what messes with our definition of altitude.

You’d have a hard time discerning that oblateness from an actual photo of the Earth. In the graphic, the oblateness is exaggerated to a value of 0.1. In reality:

where De = equatorial diameter and Dp = polar diameter. So Earth is only slightly oblate, but as you’ll see, that’s oblate enough to have consequences.

And now I can answer your question: The source of the Mississippi is Lake Itasca in northern Minnesota. Lake Itasca is 427 m (1400 ft) above sea level. From those headwaters the river flows 3766 km (2340 miles) mostly southward to the Gulf of Mexico. There, the river finally reaches sea level.

But wait … if you allow for the Earth’s oblateness, the source of the Mississippi is 6 km (6373 km – 6367 km) below the Gulf as measured from the center of the Earth. Does this not mean the river is flowing uphill? The answer is no — not in the usual way we define “uphill”.

But wait again … Lake Itasca is still 6 km closer to the center of the Earth than the Gulf, so why doesn’t gravity pull water from the Gulf back to Lake Itasca? As it turns out (pun intended), centrifugal force opposes the elevation gradient and would hold the water in equilibrium. The definition of sea level acknowledges this effect.

If we could somehow stop the rotation of Earth, while maintaining its oblate shape, water from the Gulf would then flow back into Lake Itasca, dropping 6 km downhill as it seeks the new sea level. I doubt cabin owners on Lake Itasca would be pleased with their new “oceanfront” properties.

So if you define “uphill” as “a direction that takes you farther from the center of the Earth“, then yes, you could say the Mississippi flows uphill. But that definition only agrees with the normal definition of “against the pull of gravity − centrifugal force” on perfectly spherical non-rotating planets.

While doing the research for this post I stumbled across a surprising factoid: It takes 90 days (2160 hours) for a drop of water to travel the entire length of the Mississippi. That means the average speed of flow is:

Recent rains and snow-melts in the Midwest are still flooding the Upper Mississippi river basin. Fortunately, communities downstream have advance warning — more so the farther downstream they are. Heavy inputs of water can increase the flow speed locally, of course, but it never lasts. Emergency planning authorities monitor speed and depth at multiple points along the watershed. Once the water is in the river we can predict its behavior quite accurately. Alas, the rains and snow-melts that start these flooding events are harder to predict.

Next Week in Sky Lights ⇒ When the Invisible Becomes Visible

Two Takes on Rain
When the Invisible Becomes Visible
HOME