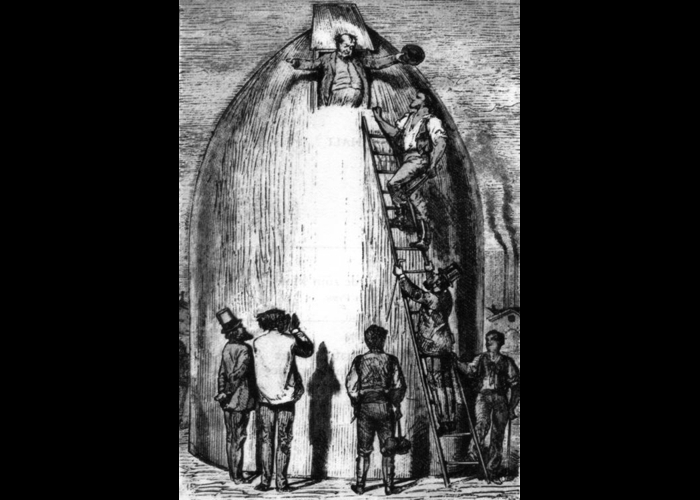 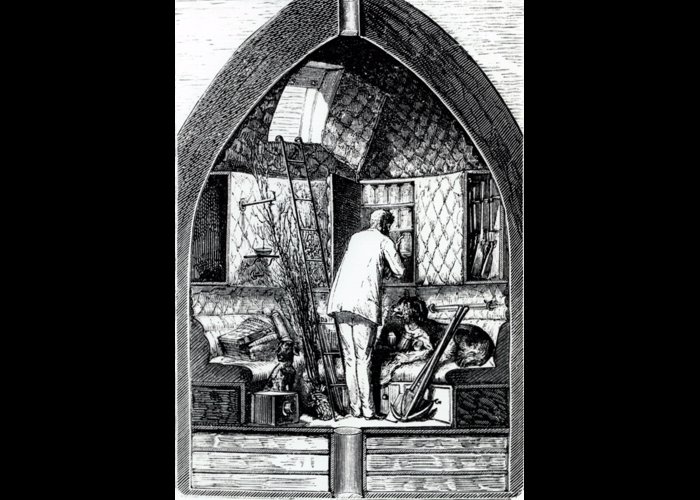 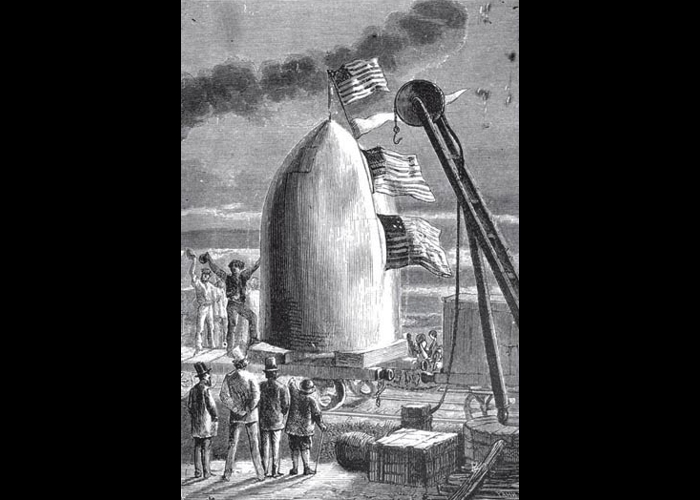 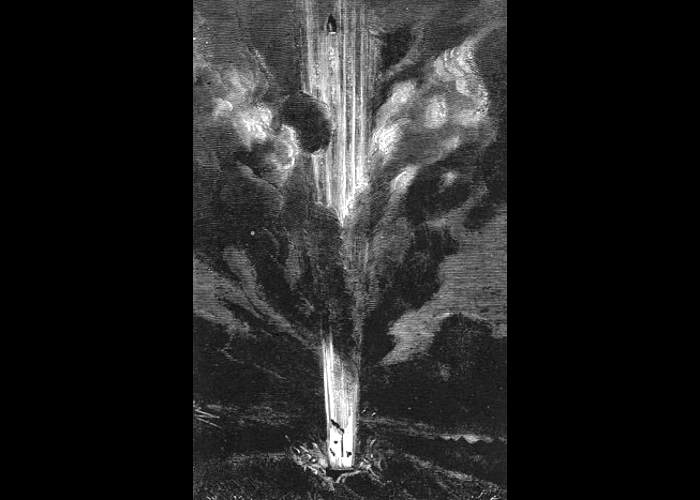 Question: I learned some good stuff from your last post about rocket stages, thanks. Had no idea it was that difficult to get into space. So then I started wondering why we don’t just “shoot” the payload into space, like a really fast bullet. You wouldn’t need to carry any fuel then, except for maneuvering, so it would seem a lot simpler. Why don’t we use this method to get into space? — EF, Detroit, MI

Answer: Well, it’s been suggested, at least in science fiction. Jules Verne published his novel From the Earth to the Moon in 1865. The slideshow features four illustrations from the book. These grayscale engravings are by artist and draftsman Henri de Montaut.

In this novel the spacecraft (Columbiad) has no engines save for maneuvering thrusters. It is fired into space as a ballistic projectile from a huge cannon implanted in the ground. All the momentum needed to carry Columbiad to the Moon is provided by an enormous charge of “gun cotton”, aka nitrocellulose.

Using data provided in Verne’s novel we can investigate the feasibility of this launch system. Note the cannon dimensions. Click to enlarge. 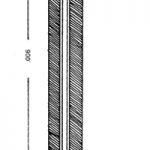 We start with the speed Columbiad would require at the time it passes 100 km altitude (essentially the top of the atmosphere). To reach the Moon from Earth you need to attain a speed near escape velocity. If you’re starting at an altitude of 100 km, the required radial speed would be:

where G is the universal gravitational constant, M is the mass of the Earth, and R is the radius of the altitude from which you’re trying to escape. For comparison, to merely orbit the Earth at 100 km altitude requires a speed of “only” 5.55 km/s.

If you’re moving that fast in the (nearly) frictionless environment of space, even though Earth’s gravity is still pulling back on your ship and gradually reducing its speed, the ship’s momentum will be sufficient to carry you to the Moon and beyond. So what would it take to reach 7.85 km/s by the time the ship leaves the cannon?

Verne’s cannon was 900 ft (272 m) long. There was 180 ft (55 m) of gun cotton stacked at the bottom, leaving 720 ft (217 m) of barrel length to accelerate Columbiad. Note that after the “bullet” leaves the barrel, expanding gas from the explosive can no longer apply a propulsive force. Thus, it must reach a speed of 7.85 km/s over a distance of 217 m. This requires an acceleration of:

since Vo = 0 if we start from rest. At that rate of acceleration the spacecraft (and its payload) would feel a g-force 14,500 times their normal weight. If the payload is diamonds or titanium girders, no worries. If the payload is humans or other fragile objects … Houston, we have a problem.

Testing during the early days of space flight found the maximum acceleration tolerated by the human body is around 10 g. In practice, launches typically subject astronauts to accelerations of 2–3 g. Given the desired Vf of 7.85 km/s, if we want to constrain the acceleration to 3 g (29.4 m/s2), the barrel of the cannon would need to have a length of:

That’s a pretty long barrel. Drilling 1050 km into the Earth to implant the gun is geologically impossible. And then there’s the difficulty of constructing the massive cast iron barrel which, using the given bore and barrel thickness, would require 28 million cubic meters of metal weighing 220 million metric tonnes. To put that into perspective, the total global production of cast metals is currently around 100 million tonnes per year.

One final problem is the effect of air drag as Columbiad’s speed increases. Drag forces would cause the spacecraft to start decelerating immediately after it leaves the barrel, so a launch speed much greater than the 7.85 km/s escape velocity would be required to compensate. The exact speed would depend on the size, shape, and mass of the spacecraft, but even at a speed of 7.85 km/s there’d be frictional heating far beyond that experienced by real spacecraft during reentry — and it would happen while still in the barrel. If such a launch were attempted, Columbiad would explode into a plasma well before exiting the gun.

So it looks like Verne’s method of getting to the Moon remains in the realm of science fiction. It might have seemed plausible in 1865, but we’ve learned a fair amount of astronautics since that era.

Next Week in Sky Lights ⇒ Two Takes on Rain

Q&A: Why Rockets Use Stages
Two Takes on Rain
HOME