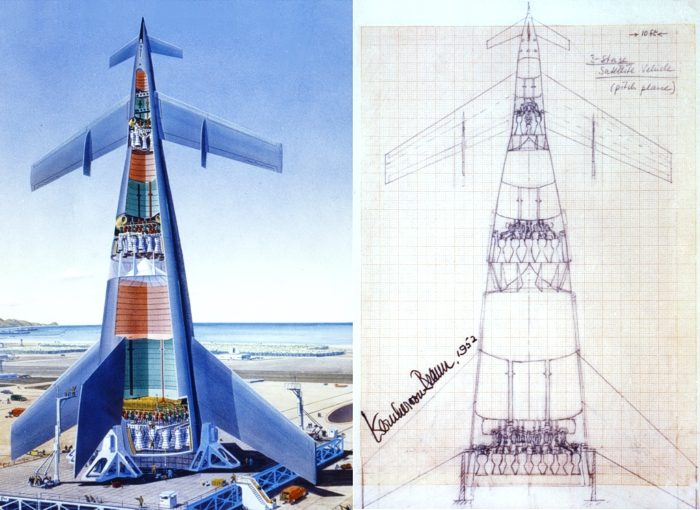 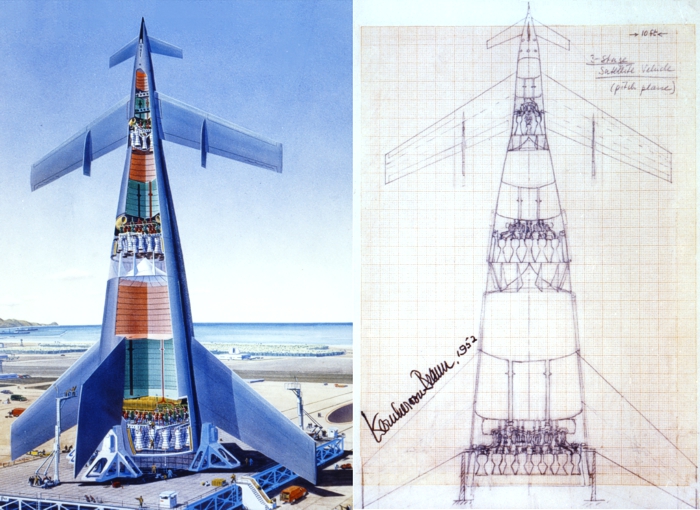 Question: I saw a video of those SpaceX Falcon boosters coming back to the launch site and landing vertically. Just amazing technology, almost like in sci-fi. Then I wondered why they even bother with stages at all. Seems awfully complicated. Why can’t they get to space with just a one-piece rocket? — BR, Wyoming Valley, PA

Answer: There’s a very good reason for stages on rockets, and it all comes down to the power of the fuel. First thing to note is that 70–90% of a rocket’s takeoff weight is fuel. So the higher the power/weight ratio of that fuel, the better it is for lifting payloads.

The main graphic shows a staged rocket design conceived by Wernher von Braun ca. 1952., at which time he was working for the United States. Previously, he developed the V2 rocket for Germany in WW2. The right panel shows his original drawings, the left panel an artist’s rendering of the design. Long before staged rockets were actually built, von Braun realized stages would be needed to reach orbit. The reason was the power/weight ratio of currently available rocket fuels (propellants).

The “power/weight ratio” of a given propellant is measured by something called specific impulse (Isp), which is a little difficult to grasp mathematically. By definition Isp = change in momentum (of the rocket) per unit of propellant burned (N⋅s/kg). It can be expressed in units of “velocity change” or “time”. Larger values are better. Here’s the Isp for some modern propellants:

To reach an orbit at 100 km altitude (the lowest possible) requires changing the rocket’s speed from 0.0 km/s to 5.5 km/s (about Mach 26). The classic “rocket equation” developed by Konstantin Tsiolkovsky in 1896 tells us how the change in speed is related to specific impulse, gravity, and rocket mass:

where “Δv” is the change in velocity, “g” is the strength of gravity at the launch site, and “m0” and “mF” are the original and final spacecraft masses. Because of the m0/mF ratio, the more mass you can get rid of, the greater your final speed. Of course, 70–90% of your launch mass gets burned off on the way up, but further mass reduction can be had by ejecting unneeded hardware.

For example, the Saturn V rocket used for the Apollo Moon missions had three stages. The first stage used refined kerosene and liquid oxygen as propellants. Fully fueled, this stage had a mass of 2,300,000 kg. Once its propellant was burned, the empty tanks and useless engines still had a mass of 131,000 kg. Ejecting that dead load saved a lot of what fuel remained. The photo below shows just one of the five F-1 engines that powered the first stage of the Saturn V. It’s mass was 8377 kg. And yes, that’s my wife Sandi posing next to it for a sense of scale. 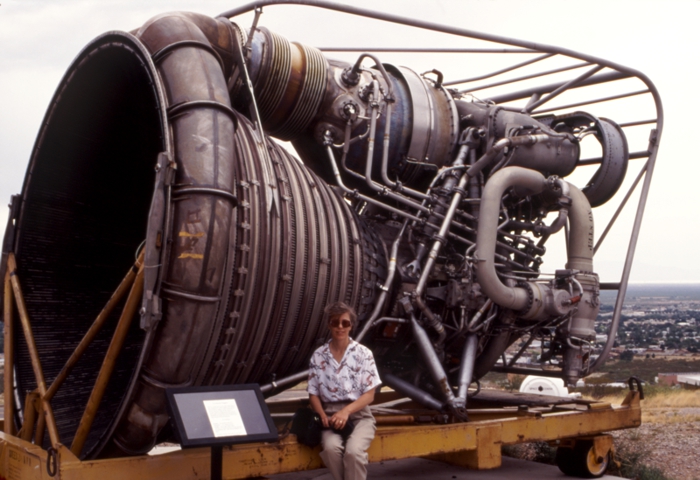 Unfortunately, even though it would be mechanically simpler, a single-stage-to-orbit rocket is just not possible using chemical propellants. No chemical fuel with the required Isp exists. One might ask: Then why don’t they just build a rocket with a larger fuel tank to make up for the lower Isp? Answer: Because you need to burn fuel to lift the weight of yet-to-be-burned fuel. And when you calculate the amount of fuel required for a single-stage-to-orbit rocket, the storage tank would be so large it couldn’t withstand the stresses of launch.

Ask any rocket scientist and they’ll tell you space flight is edge-of-the-envelope engineering. The ability to get into space at all is just barely doable using our best science and technology. Previous to the recent emergence of commercial ventures like SpaceX, only governments had the resources to reach space.

The graphic below shows the flight profiles of a typical 3-stage to orbit launch, and a hypothetical 1-stage launch. In a rocket carrying human passengers the acceleration must not exceed 3.5 g’s, at which point people would feel 3.5 times their normal weight. For inanimate cargo acceleration can go as high as 10 g’s — the limit really depends on the nature of the payload. 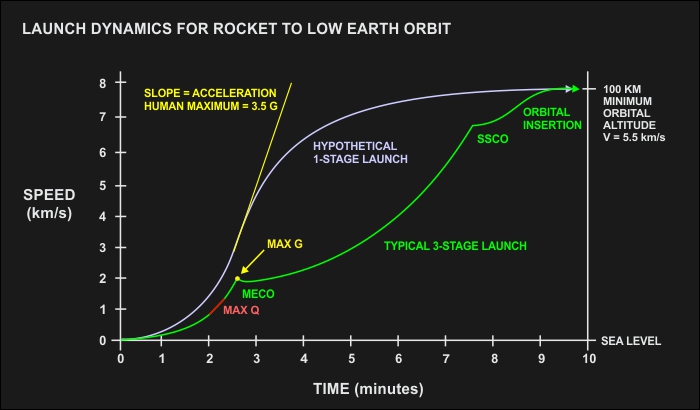 1. After liftoff the speed goes from zero to 1 km/s (Mach 3+) in a matter of minutes. As the rocket climbs at ever increasing speed, air resistance continues to build. Fortunately, the air also becomes less dense which reduces the air resistance at a given speed.

2. At some combination of speed and altitude, air resistance reaches its maximum. This is the point known as max Q where aerodynamic stress to the rocket’s structure is greatest. The throttle is backed off slightly to maintain constant (rather than increasing) acceleration. It’s hard to see in the graphic, but that red max Q segment is a straight line.

3. Shortly after max Q, and just before main engine cut-off (MECO), the throttle is pushed back up and the rocket reaches it greatest rate of acceleration (max G).

5. The second stage engines ignite and continue accelerating the rocket to near the required orbital speed.

6. The second stage is ejected and the third stage engines ignite. This begins the final leg of the launch known as orbital insertion. After an initial burst of acceleration the rocket must ease into a nearly horizontal path with the requisite speed to maintain orbit at that altitude. After the third stage engines are turned off, smaller maneuvering engines on all sides can perform this tweak.

So there you have it. It’s a complicated process, granted, but it’s the only way we know how to do it at present. To see the equivalent launch profiles for a Falcon 9 (2-stage) rocket go here.

There have been some suggested alternatives to chemical propellants. The nuclear thermal rocket studied by both the US and USSR never went further than ground-based tests. The measured specific impulse was around Isp = 925 s, but concerns about a launch failure scattering nuclear waste into the environment pretty much shut down the program.

If these limitations to space travel bother you, you might want to read my June 22, 2015 post: Getting to Space Without a Rocket.

Sunset Virga
Q&A: Why You Can't Just Be Shot Into Space
HOME