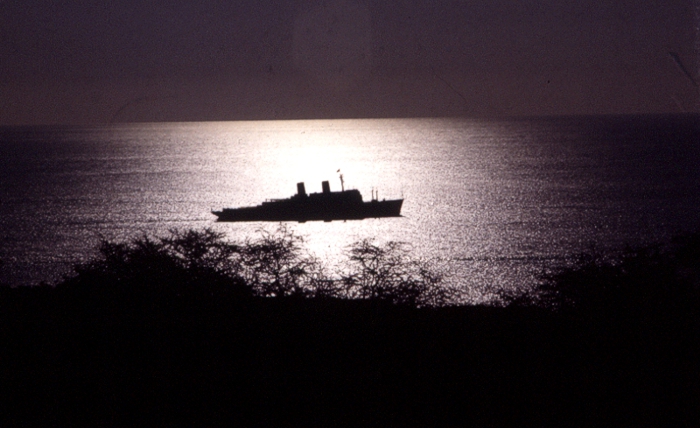 I was scanning some old 35mm slides last week and discovered this photo from a vacation in Hawaii. It’s a beautiful example of what’s called a glitter path. In this case the light source was a nearly-full Moon over the bay at Kailua-Kona. The photo was captured using an Olympus OM-1 with the stock 50mm lens. Exposure was f/4, 1 second, ISO 800.

Before reading further, it might be informative to refer to my Aug 3, 2015 post Sun Pillar Sunset. The optics behind sun pillars and glitter paths are essentially equivalent.

The surface of a body of water is constantly undulating in a progression of wavelets generated by wind. The general form of non-breaking waves is a series of convex and concave distortions over a spectrum of wavelengths — there can be shorter waves riding on longer waves. The graphic below shows the geometry for the simplest case. Of course, you can also see glitter paths when the waves are breaking, but we’ll stay with the easy geometry.

Because the waves are in motion, light rays from the distant source intermittently reflect above, below, and directly toward your eye. This is what causes the “sparkling” appearance of a glitter path. And since these waves are curved in 3D, there will also be rays reflected to your eye from points to either side of the 2D paths shown in the graphic. This is why a glitter path usually appears wider than the diameter of the light source.

In contrast to the human eye, a camera integrates incoming light over the entire exposure time. So when you photograph a glitter path its width will be determined by your camera settings. Longer exposures capture more of the less-frequent chance reflections off-axis from the direct path. The longer the exposure, the wider the glitter path.

Shorter exposures capture narrower glitter paths, but the minimum width will always be the width of the light source (0.5° for the Moon). The exposure used for this photo captured a glitter path around 30° wide. To my unaided eyes, the glitter path was narrower than the silhouetted ship.

Glitter paths are most often created by the Sun and Moon, but can also be seen when a bright star or artificial light source is near the horizon. And because glitter paths result from the unique geometry between light source and observer, as with a rainbow, every observer sees a different glitter path — even two observers standing side by side.