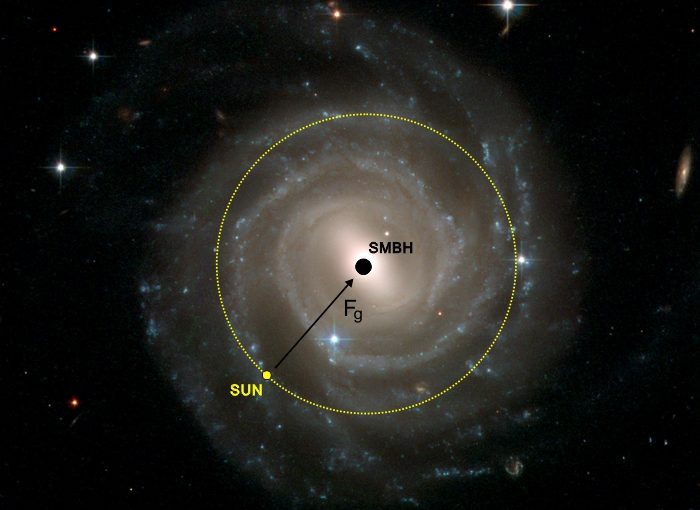 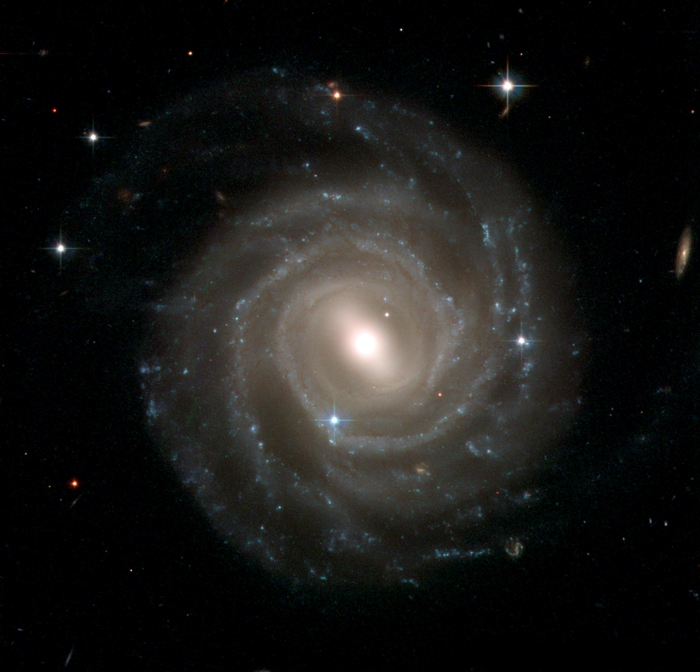 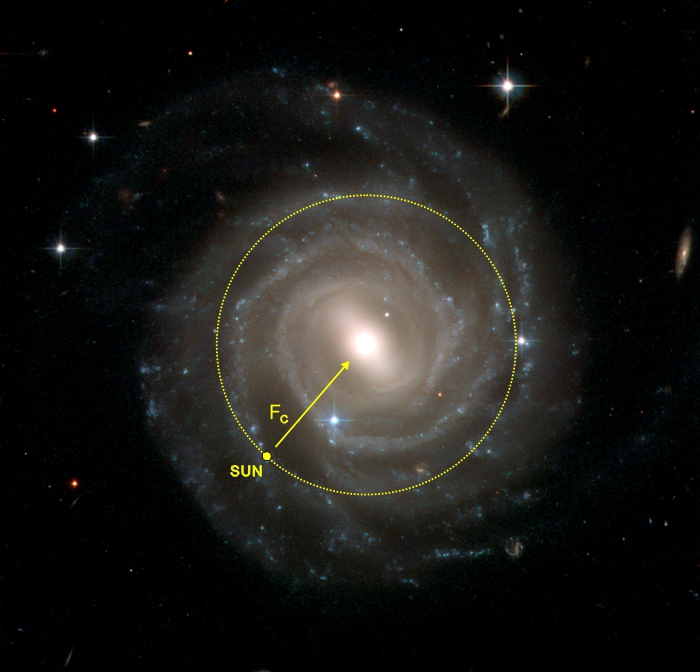 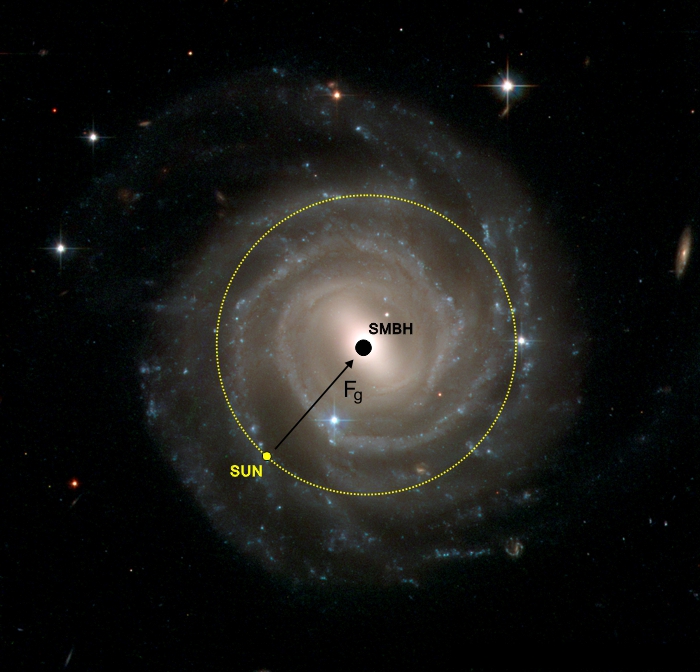 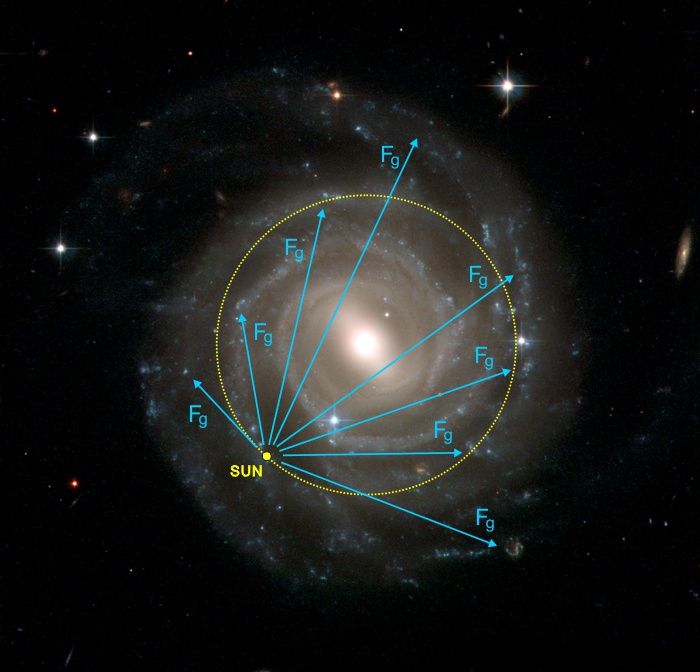 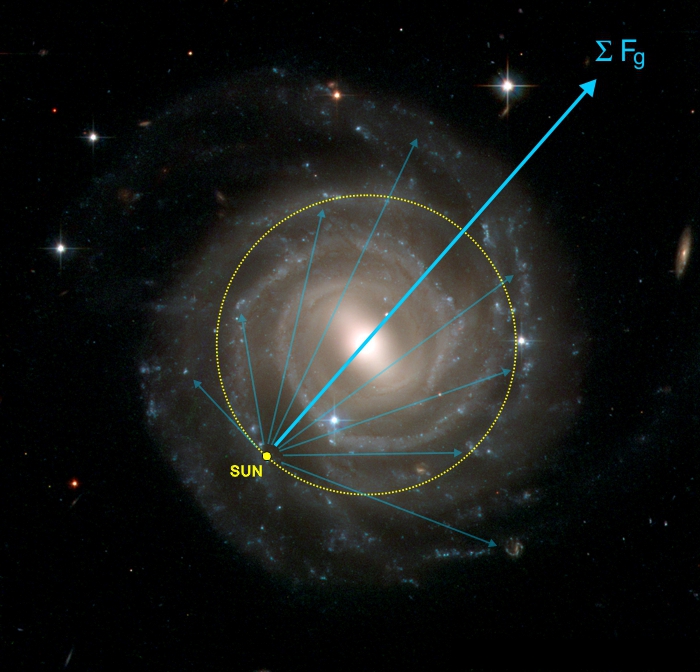 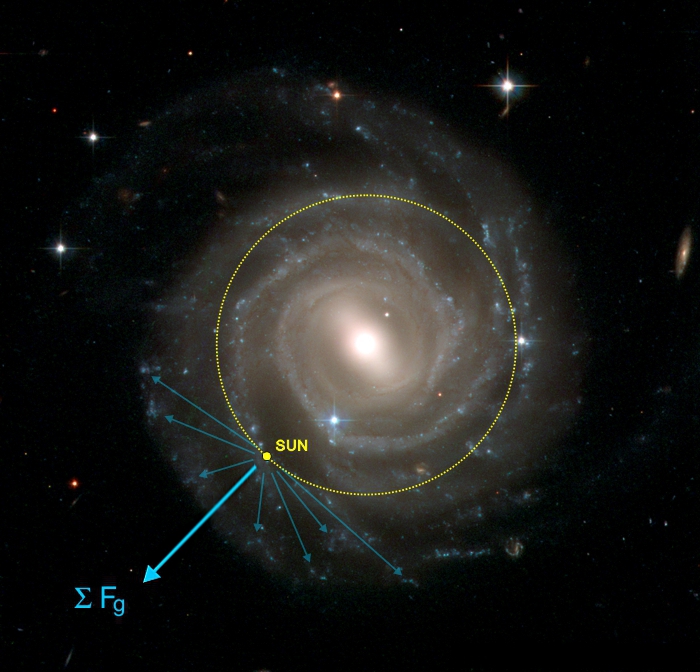 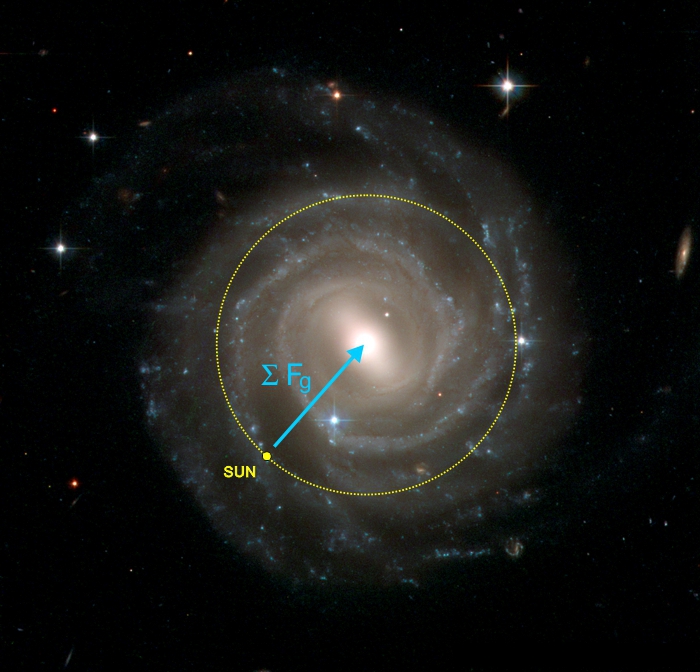 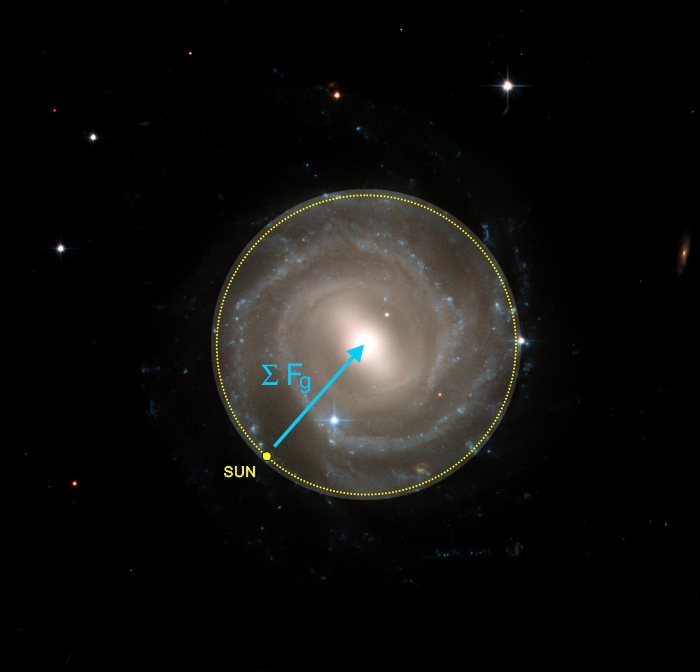 Question: Is it correct to say that all the stars in the Milky Way are in orbit around the super-massive black hole at the center of the galaxy? It seems logical, since it has the most gravity. — RS, Somewhere on the Road

Answer: If by “orbit” you mean “moving in a roughly circular path around the black hole” then the answer is yes. But if you’re asking about the cause of that orbit, the answer is no. If that super-massive black hole (SMBH) were to instantly vanish, the orbit of the Sun (and most of the stars in the Milky Way) would be largely unchanged.

Your question provides me the opportunity to discuss a few related items I think will be of interest, so pardon what might seem to be a lengthy digression. The answer requires a fair amount of math and physics.

The slide show explains how the Sun’s motion is governed not so much by the SMBH, but by the combined gravitational pull of all the stars on the opposite side of the galaxy. Some quantitative arguments are provided, but we’ll do the math here and show just how “dominant” that SMBH really is.

The “solar mass” mentioned in the slide show is the mass of our Sun: 2.0 × 1030 kg. The SMBH weighs in at 4.3 million solar masses. Our best estimate for the total mass of the galaxy is around 90 billion solar masses. We need to express mass in “kilograms” for these calculations:

Finally, we’ll need to approximate some numbers related to the two groups of stars (opposite the Sun and behind the Sun). This requires slicing a circle into sectors and segments. If you’re curious about the geometry involved, click on the thumbnail. If not, proceed to the next data set. 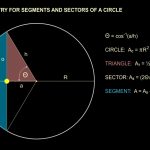 Using that geometry we obtain the following values:

Gravitational forces can be calculated using Newton’s equation for universal gravitation. The force exerted by the SMBH on the Sun would be:

The gravitational force from the stars opposite the Sun would be:

The gravitational force from the stars behind the Sun would be:

So the net force from all the stars is:

This result shows the affect of the SMBH on the Sun’s orbit is only:

So the answer to your question is: Yes, the Sun is in orbit around the SMBH, but not because of its gravitational influence. The SMBH is at the center because that’s the only stable position in a normal galaxy for a mass that large. It has a significant effect on the orbits of nearby stars, but out here in the galactic suburbs the Sun is pretty much oblivious to its gravity.

The calculations above suffice to demonstrate that the Sun’s orbit is caused by the stars in our galaxy and not by the SMBH. But it’s a very rough calculation that makes several assumptions and approximations. First, the density of mass increases as you approach the center of the galaxy — my calculations assumed the density was uniform. Second, we’ve used a 2D model for a 3D galaxy. Third, the distances to the centers of mass of the two star groups was a median distance and not an average distance.

Interestingly, there’s a way to avoid those issues and calculate a more accurate total force. It uses a mathematical device from calculus called the Shell Theorem. What it says about galactic dynamics is this: Only mass inside the Sun’s orbital radius has an effect on its orbit. The mass outside the Sun’s orbit also exerts gravity, but that force is applied equally from all directions so it cancels out of the equation.

Now let’s recalculate just what that total gravitational force would be. Again assuming uniform density, we get the mass inside the Sun’s orbit as:

In this case, the SMBH contributes:

Strangely, if we use that same data to calculate what the Sun’s orbital period (T) should be:

which is almost twice the observed orbital period of 225 million years. At the speed the Sun is moving, it should escape from the Milky Way and not be held in orbit.

Here’s how much mass must be present inside the Sun’s orbit to account for its 225 million year orbital period. Solving the orbital period formula for “m” and using the observed value of “T”:

That’s 3.4 times the mass we can account for in our galaxy. We know something must be there from its gravitational influence on orbital motion, but we can’t directly detect it with any instrument. Hence, we have named this mass dark matter. We don’t really know what it is. Several exotic particles have been suggested, but none have yet been detected.

In almost every galaxy we observe, the stars are orbiting faster than can be accounted for by the mass visibly present. The ratio of dark matter to visible matter varies by galaxy type, so theoretical progress has been slow. A recent paper by Paul J. McMillan claims a dark-to-visible ratio of 19.5:1 for the Milky Way.

So the answer to your question might be: The Sun’s orbit is controlled not by the SMBH, nor by the stars in the Milky Way, but by the dark matter halo suffusing the galaxy. Models suggest these halos are shaped like oblate spheroids (from rotation), are roughly centered on the galaxy, extend up to 10X the galaxy’s visible diameter, and represent the majority of mass in most galaxies.

It may seem strange to hypothesize the existence of something we can’t detect, but that happens sometimes in science. In 1930, Wolfgang Pauli hypothesized the existence of an elusive particle he dubbed the neutrino. It wasn’t actually detected until 1942, but its existence was required to balance the equations for conservation of energy and momentum.

Earlier, I used the phrase “observed orbital period” to describe the Sun’s motion. I probably should have said “measured” or “calculated”. Fact is, humankind hasn’t completed a full orbit yet. Since the Sun and planets began their existence some 5 billion years ago, we’ve made 21+ orbits around the Milky Way. Since the dawn of recorded history in 5000 BCE, we’ve made only 1/32,000 of an orbit.