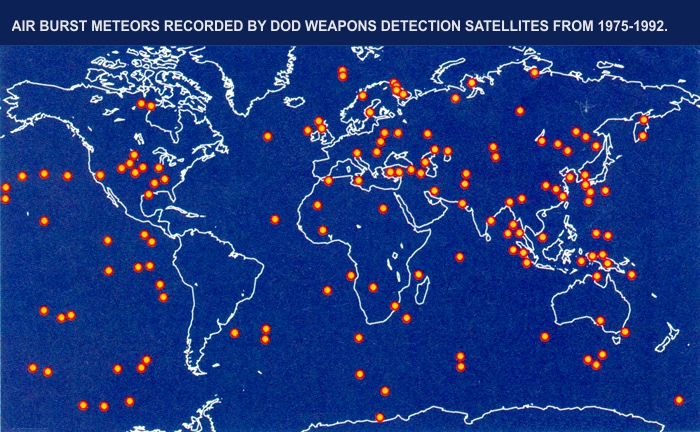 Question: There was this really bright meteor over Michigan in January, and my family was outside so we all saw it. I read that NASA says it was a couple yards in diameter. It was the brightest meteor I ever saw. How rare are these really bright ones? — VK, Lansing Michigan

Answer: Something that size hits our atmosphere maybe once a year. Of course, at any specific location (like Lansing) you won’t see them that often. But some lucky stargazer in another location will. The graphic above shows some of those “big ones” that were recorded by Department of Defense satellites originally designed to look for illegal nuclear testing.

This recently declassified DOD data, spanning 1975-1992, shows that meteors up to several meters in diameter frequently strike our atmosphere, some with the force of a small atomic bomb. Not shown are the flash brightness levels, which allow estimates of the energy release and meteor size. Analysts think that only 10% of the actual air bursts were recorded by the satellites since they weren’t scanning all locations all the time.

An “air burst” is what astronomers call a meteor that explodes in the atmosphere before it reaches the ground. The explosion is caused by forces from its collision with our atmosphere — at a meteor’s average incoming speed of 30 km/s (67,000 mph) our atmosphere behaves like a brick wall. There’s also significant heating from friction with the air, and this will cause expansion and cracking. How much of the meteor makes it to the ground (if any) depends on its relative proportions of metal, rock, and ice.

Not surprisingly, smaller meteors are more common than large ones. When you graph that DOD data along with historic data gathered by sky watchers, the distribution of sizes can be related to their frequency in a nearly linear plot on a logarithmic graph (below). Note that the vertical and horizontal axes are graduated in powers of 10. Each step up, or to the right, represents a factor of 10X change. 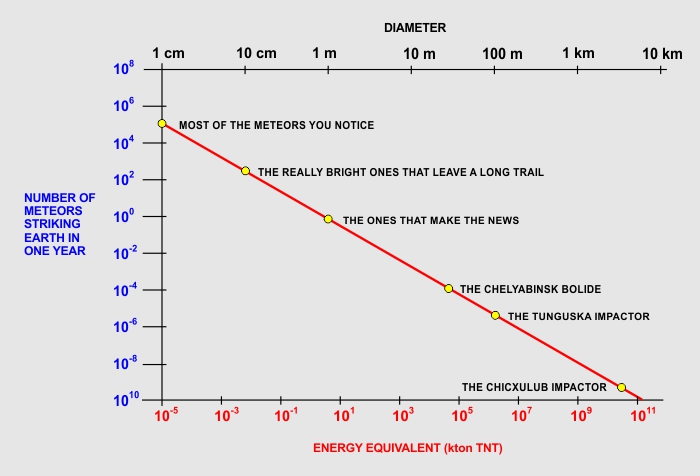 Obviously, the horizontal axes don’t necessarily end where shown, but they show enough of the range to appreciate how rare (and how devastating) the really large impacts are. For example, meteors the size of the Chelyabinsk bolide (20 meters) enter Earth’s atmosphere 10-4 times each year. That’s equivalent to once every 1/10-4 = 10,000 years. The Chicxulub impactor — the one that caused extinction of the dinosaurs — is estimated to have been around 12 km in diameter. Anything above 10 km is large enough to disrupt the global ecosystem and cause an extinction event. Fortunately, these only occur (on average) once every 100 million years.

The graph could be extended to the left as well. A one centimeter meteor would actually be quite spectacular, even to a city dweller in light polluted skies. In rural areas with darker skies meteors down to the size of a grain of sand (0.1–0.5 mm) can be seen. Scientists estimate the Earth gains some 40 million kilograms of meteoric mass each year, most of it in the form of fine dust beyond the left edge of the graph.

We recently celebrated Thanksgiving here in the States, but I suspect few gave thanks for the meteor shield our atmosphere provides. You need only look at the Moon through binoculars to see how many impacts this airless world has suffered. And the Earth is a much bigger target.