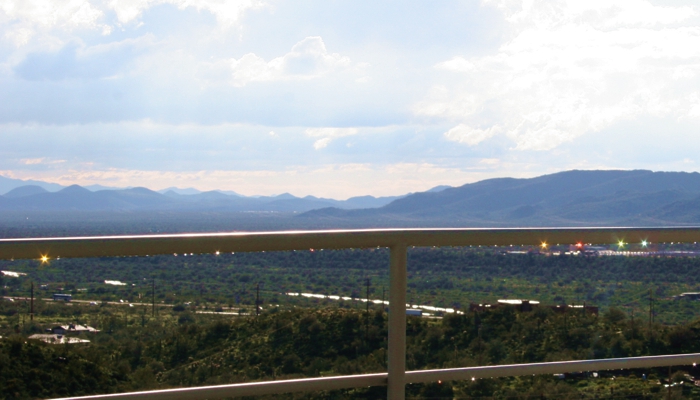 After yesterday’s heavy rain I ventured out on my deck to check the sky. My attention was immediately captured by a delightful optical display on the deck railing. The Sun is off to the right, nearly set, and bright rays are peeking through small gaps in the clouds. Large water droplets are hanging from the underside of the top railing, and many are in just the right position (relative to the camera and Sun) to display various colors of the spectrum. From right to left, you can see blue, green, red, and yellow-orange.

This phenomenon, called dispersion, also produces the colors in a rainbow. In a rainbow the water droplets are falling through (or suspended in) the air over a large volume of atmosphere. They’re typically less than 1 mm diameter and are roughly spherical. In this case the droplets are arranged linearly, they’re 8 mm diameter (huge compared to rainbow droplets), and they’re hemispherical. They were optimally formed and positioned to disperse the light of the setting Sun. Click on the thumbnail below to see a closeup of these liquid prisms. 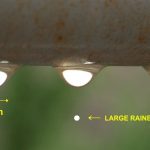 Unfortunately, by the time I snapped that closeup the Sun had set. The droplets were now being illuminated by diffuse light from the grey sky — equally so from all directions. Dispersion was still happening, but the colors were being remixed back into white.

In contrast, while the Sun was shining, each large drop was intercepting a sufficient amount of direct sunlight to radiate like a miniature Christmas tree bulb. Here’s how the colors were produced: 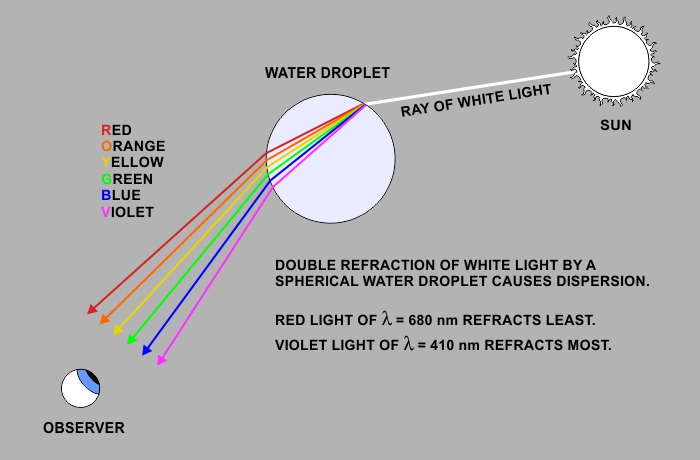 Light from the Sun contains all colors of the spectrum, which when combined appear “white” to human eyes. Although the Sun is often portrayed as being “yellow” its true color is white. When light enters a droplet of water it slows down and refracts (changes direction) by an amount inversely proportional to its wavelength. Violet light, with the shortest wavelength (410 nm) slows and changes direction by the greatest amount. Other colors of the spectrum change direction by lesser amounts. When the light leaves the water droplet it speeds up and refracts again. The diverging colors now display the ROYGBV spectrum.

[Sorry, I don’t subscribe to the idea that “indigo” is sufficiently different from violet — we’re talking about colors here. I use the abbreviated ROYGBV instead of the classic ROYGBIV. It makes the diagrams simpler. And a search for ROYGBV does get 29,000 hits. Pronounce it any way you want.]

Of course, the number of colors is not limited to 6 or 7. Colors blend into each other continuously from one end of the spectrum to the other. HDMI digital color specifications provide for 281.5 trillion colors (48 bit), each of which is unique, but the human eye is capable of distinguishing only 10 million colors. You can think of all those other colors as being between the 6 colors of ROYGBV.

The observant reader may question the sequence of colors seen along the railing — and that lone yellow-orange droplet at the far left. Had the droplets been more closely spaced, all of them equally large, along the entire length of the railing, you would see two complete ROYGBV sequences lined up end to end. This is similar to what happens when a double rainbow forms, where the incoming white light is internally reflected and emerges across a second range of angles. But in this case some droplets were missing, so you only see fragments of the two ROYGBV sequences.

The lone yellow-orange droplet is the result of a 5° change in railing direction at the vertical post in the center — you can see the bend if you look for it. This created an additional alignment geometry between the Sun and camera making possible a second pair of ROYGBV patterns. Alas, only that one large droplet lit up, but you can see a hint of color in some of the smaller droplets along that section of railing.

Next Week in Sky Lights ⇒ How the Sun Got Its Name

Q&A: Thermal Expansion and Sea Level Rise - Part 2
Q&A: How the Sun Got Its Name
HOME