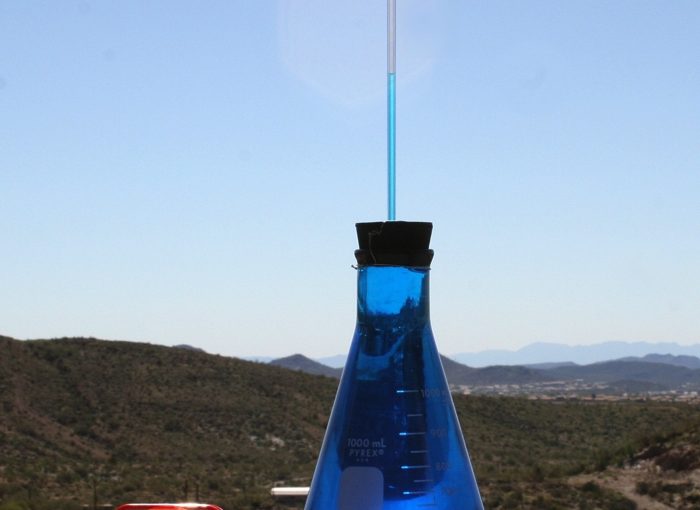 Above is the time lapse video from my Oct 15 post — a first attempt to demonstrate thermal expansion of water. As I said last week, several bad decisions were made in that experiment, and all served to limit the amount of thermal expansion. Version 2 of my video, as you will see below, is far more convincing. But before we get to that, let’s take a close look at what I did wrong on my first attempt …

When an experiment fails, and they often do, scientists routinely look for why it failed and how that failure could be avoided. In this experiment I was attempting to demonstrate the thermal expansion of water. To make that effect most visible, the amount of expansion in volume (ΔV) needs to be as large as possible. Unfortunately …

The one factor I got right was chilling the test tube before running the experiment. Since ΔV will be proportional to ΔT, the lower the starting temperature the better.

My intuition told me this had a good chance of working, and I just happened to have the parts needed in my shop. Had I done a quick calculation using the equation from my Oct 15 post, I’d have seen that (for the given conditions) I could have expected an expansion of:

So even if the water had warmed all the way up to air temperature of 36 °C it could not have “spurted out of the eye dropper.” As you can see in the original video, the water level rose to about the halfway point [3 cm of the eye dropper’s length is inside the stopper].

I was actually hoping the water would warm to higher than air temperature. With the blue dye it would absorb more heat from the Sun compared to clear water. And air is not a good conductor of heat, so the test tube shouldn’t lose heat to the environment too quickly. The graphic below shows the thermodynamics: Heat is input along the side of the test tube facing the Sun, while heat is lost by radiation and conduction in all directions. 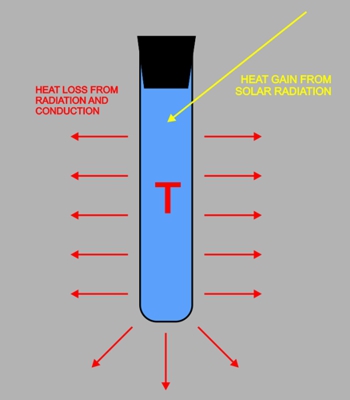 And this is where the surface-to-volume ratio comes into play. Higher surface to volume ratios lose heat faster. This is why a can of beer cools faster than a keg. If instead of a 50 cm3 test tube I used a 1000 cm3 Erlenmeyer flask (12 cm × 20 cm) I’d have a surface-to-volume ratio of: 490 cm2 / 1000 cm3 = 0.49 (less than a quarter of the test tube’s 2.1). Its thermal equilibrium temperature would be higher than the test tube’s, providing a larger ΔT, and its larger V would proportionally increase ΔV.

Since I needed to mix up a new batch of blue water, I added a bit more blue dye just to hedge my bet. The darker the water the faster it will absorb heat from the Sun.

Sure, it didn’t “spurt” from the top of the tube, but near the end when the water reaches the top, you can see the meniscus of a blue drop forming there. Ultimately the drop bursts and flows down the outside of the tube. At that point I stopped the time lapse.

That’s seven times the volume needed to overflow the 0.66 cm3 vertical tube. So there you have it: thermal expansion of water caused by heat absorbed from sunlight and the atmosphere.

Those numbers surprised me, as they did TKL in his question last week. It took a two-part post to answer that question to my satisfaction. If you hung in there through all the thermodynamics and math, well done. You’ve just seen a prime example of how media claims can be verified, or dispelled, by using science.

Next Week in Sky Lights ⇒ Rainbow on a Railing