Question: I know the ocean level is rising from melting ice, and I read your earlier column about the additional rise from sedimentation [June 18, 2018], but I’ve been hearing there’s another factor at work — thermal expansion of seawater as it gets warmer. I read they estimate thermal expansion is responsible for 1 mm/yr out of the total rise of around 3 mm/yr. I was surprised the effect was that large. Could you put thermal expansion into perspective? — TKL, Eniak, Marshall Islands

Answer: Indeed I can, but there’s a fair amount of math involved, along with much empirical data. You’ll see above I’m reusing the ideal ocean model from my June 18, 2018 post, with a few modifications. The feature of interest is the warm surface layer (red cylinder) floating on the denser cold water. Note: This graphic is not to scale (NTS) — the cold deep water is actually 90% of the total water volume, the thermocline is 4X thicker than the warm surface layer, and D is exaggerated by a factor of 1500 compared to R.

I’ll break my analysis into six sections so it’s easier to follow. This will be a longer post than some, but your question is important and deserves a rigorous answer. Most of my data come from the Intergovernmental Panel On Climate Change (IPCC). Their Working Group I Report: The Scientific Basis was especially helpful. The IPCC data is difficult to understand without scientific training. So rather than citing complex data charts I’ll answer your question from first principles.

Ocean Thermal Stratification: The oceans are warming mostly on the surface, where heat from the Sun and atmosphere is absorbed and diffused through the first 200 meters. This surface layer has an average temperature of 17 °C, so it has a lower density and floats on top the cooler water below. The layer is well-mixed by the action of wind, waves, currents, convection, and the addition of fresh water from rain, rivers, and melting ice. Sometimes called the mixed layer, it is essentially isolated from the water below.

Under that lies the thermocline spanning from 0.2–1.0 km depth on average. Temperature decreases linearly with depth from 17 °C at the top to 4 °C at the bottom. Heat from the warm surface layer diffuses downward slowly, by conduction only. The bottom of the thermocline is defined by the temperature at which water is most dense.

Below that lies the cold deep water. Its temperature starts at 4 °C just under the thermocline and decreases to near 0 °C at the ocean floor. Note that water at temperatures less than 4 °C is normally less dense than water at higher temperatures, and thus would float to the surface. However, water at the ocean floor is subjected to a pressure of 1000 bar (16,000 psi) compressing it to a density 5% greater than normal, so this water remains at the bottom.

Since our calculation will focus on the top-most layer of water, we’ll set H = 0.2 km. Measurements reported by the IPCC were made to depths averaging 2 km, so data in this range are reliable.

Volumetric Thermal Expansion: Ocean surface temperatures have been rising about 0.12 degrees Celsius per decade on average over the past 50 years — a total ΔT of +0.6°C. That will be the baseline for our calculation. We’ll convert back to units of mm/yr at the end. First thing we need is the volume of water (Vo) that’s doing the expanding. From the model that would be:

As that volume of water warms it will expand. The volumetric thermal expansion of water is given by:

where ΔV  is the change in volume, β is the (substance-specific) coefficient of volumetric expansion, V0 is the original volume, and ΔT is the temperature change in °C. But it’s not quite that simple … 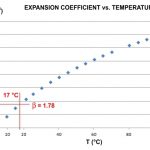 Calculation: We can now find the increase in volume from thermal expansion.

That’s almost half the total volume of the Great Lakes! All that “extra” water has to go somewhere, and unfortunately the only possible direction is up. We can calculate the increase in H as:

This is just over half the value of “1 mm/yr” cited by your source. Fact is, these were all approximate calculations based on averages and partial data sets. Starting from first principles and getting so close to the cited value makes me confident in my model’s predictions.

Uncertainties: My model ignored thermal expansion within the 0.8 km thick thermocline, where the temperature steadily decreases from 17 °C at the top to 4 °C at the bottom. We could use calculus to find this additional volume of expansion inside the thermocline, but I leave that as an exercise for the curious reader. Suffice it to say this will further increase ΔH.

More recent data indicate ocean thermal expansion is now contributing 42% of the total sea level rise, rather than the 33% suggested by your source — or the 18% predicted by my model. The expansion rate is increasing for three reasons: increase of β with increasing T, melting of sea ice that reflects sunlight back into space, and greater heat input from the warming atmosphere.

So yes, TKL, thermal expansion of seawater is a significant part of sea level rise. Especially troubling to me is the melting of sea ice in polar regions. Open water absorbs far more sunlight than highly reflective ice. This warms the water and melts even more ice — it’s a vicious feedback cycle that might already be too advanced to stop.

Mitigation: We encounter thermal expansion of water in many systems, and can almost always “science our way out of it” with clever engineering. Examples include water heater expansion tanks and cooling system pressure relief valves. Sometimes we even take advantage of thermal expansion, as in cheap (colored water) thermometers. Alas, the only way we can “cope” with thermal expansion of the ocean is by building expensive sea walls or retreating farther inland.

I wanted to close this post with a time lapse showing thermal expansion of water. Between the lack of sunny weather this past week, and a few bad decisions on my part, the video below is the best I could do. The test tube holds 50 cm3 of water, tinted blue for improved visibility. I drilled the rubber stopper and inserted an eyedropper (sans bulb) for “pressure relief”.

The test tube was first chilled in a fridge to a temperature of 4 °C (the temperature of maximum density for water). Then the stopper was inserted and the entire assembly moved outside into sunlight. Outside air temperature was 36 °C. I was expecting to see the water rise rapidly and spurt out of the eyedropper — a clear demonstration of thermal expansion. Here’s what I got instead:

The water level started at the bottom of the stopper. As the water expands, the blue arrow tracks its level until water appears in the eyedropper. You can see the water climb to about 1 cm above the stopper, so there’s no question this demonstrates thermal expansion. But I was really hoping for something more dramatic.

Tune in next week to learn what I did wrong, see how I corrected it, and watch my next time lapse video: Thermal Expansion of Water Version 2. We have a few sunny days in the forecast.