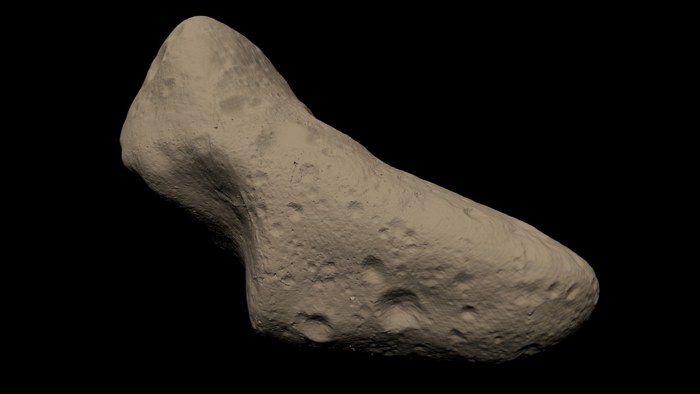 Question: While browsing Space.com I saw this article about how they figured out the shape of an asteroid by timing occultations. I had to look up “occultation”, and I think I understand it, but I don’t see what timing an occultation has to do with shape. Size maybe, if you knew how fast the asteroid was moving. Please explain. — WN, Boulder, CO

Answer: First, we do know how fast asteroids move. Every one of the 500,000+ asteroids that have been tracked and given designations have well-known orbits determined from multiple observations. If you know the size and shape of the orbit it’s possible to calculate the asteroid’s speed at any point.

For readers not familiar with the term, occultation means the hiding of one astronomical body by another. When an asteroid passes between Earth and a distant star, that star will briefly blink out. Even if the asteroid is too small and dark to image telescopically (and many are) they’re still opaque and of discernible size. Stars are larger than asteroids, but are so distant they’re essentially point sources of light. If you’re watching through a telescope, you’ll see the star “turn off” for a short time as the asteroid passes in front of it, then suddenly reappear.

This phenomenon isn’t as rare as you might think. Check out http://www.asteroidoccultation.com/ for a list of upcoming asteroid occultations. To observe one, you need to know how to find a (typically) faint star using charts or a computerized telescope. And you need to be in the right place at the right time — usually the more difficult challenge, since the area from which an occultation can be seen is a narrow strip of land anywhere from 20 km to 200 km wide.

The animation shows what happens on the ground when an asteroid passes in front of a star. You can think of the asteroid as “casting a shadow” from that star’s light, but it’s not a shadow you could see from orbit (like the shadow of the Moon during a solar eclipse). In the animation I show the shadow much larger than reality just to make things clear. The colored dots represent individual observers lined up perpendicular to the path of the shadow. Each of these observers must:

These days, astronomers most often record a digital video of the event with GPS time stamps applied. Some still observe visually and do their timing with a pre-syncronized stopwatch, but this method involves human reaction time and is not as accurate. Results are then reported to the International Occultation Timing Association (IOTA). By combining the data from multiple observers, and adjusting for location, IOTA can reconstruct the shape of the shadow. More observations yield higher resolution.

In the animation, the blue observer experiences the longest duration occultation — about 4 seconds. If the speed of the asteroid relative to Earth (which is also moving) is 425 km/s, then

This is the length of one “slice” through the asteroid. Other observers will get different times representing the lengths of other slices. With enough slices we can get a rough idea of the asteroid’s size and shape. IOTA processes the reported timings, adjusts for location, and assembles a model like this (click to enlarge): 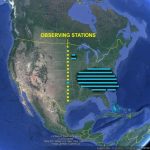 Of course, IOTA never receives such an ideal data set. Observers don’t all line up perpendicular to the asteroid’s motion, some get clouded out, and some report data with errors. But even partial data sets give us a rough “image” — that’s how astronomers knew asteroid 433 Eros was “bone shaped” before it was actually seen. In 1998, the NEAR Shoemaker space probe captured this image during a flyby and confirmed IOTA’s occultation-based model. Click to enlarge. 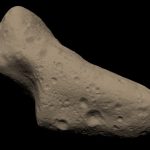 A single occultation only provides the shape of one 2D asteroid cross-section. Asteroids typically rotate and present different shadow cross-sections every occultation. Still, multiple 2D snapshots can build a 3D model. And any snapshot provides the opportunity to discover natural satellites (mini-moons) of the asteroid.

The observer fourth from the bottom will also see something interesting. From that position the star will blink off and on twice. That lucky observer will experience what is called a grazing occultation as irregularities along the southern limb of the asteroid intermittently block the star’s light. I say “lucky” because, if the observing location had been a just a bit farther south, no occultation would have been recorded.