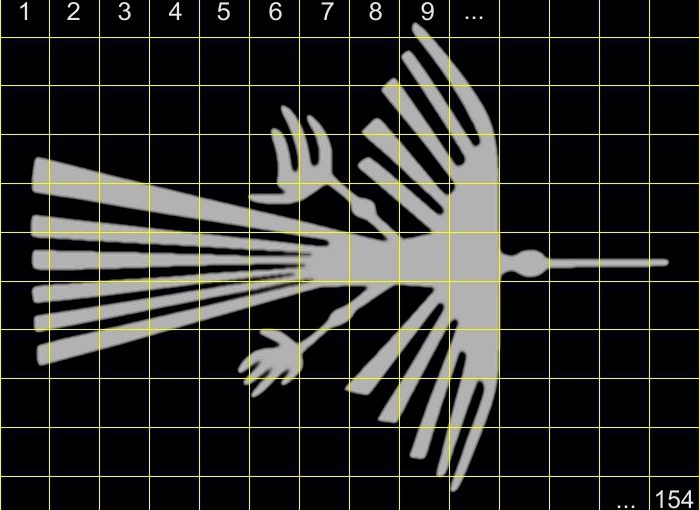 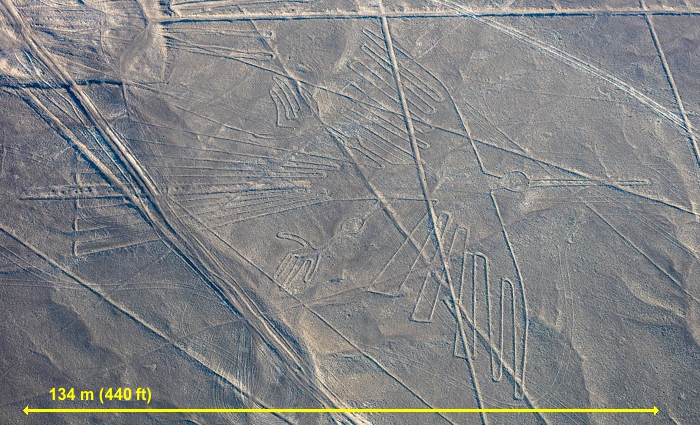 Question: I was watching this Science Channel show called “What on Earth?” and they were talking about how the Nazca Lines might have been made by aliens since you can only see the shapes from the air, and they were made long before anyone could fly. They’re also too large to draw without modern surveying gear. There’s no way those shapes could’ve been made from ground level, right? — EVD, Zofingen, Switzerland

Answer: I’ve seen that show. They investigate unusual features on the ground, some man-made, some natural, as imaged by satellites. In fact, using Google Earth to hunt for these features appears to be a popular activity. The markings you’re asking about were made by an indigenous culture, sometime between 500 BCE and 500 CE according to archeologists. So the answer to your question is: No. These shapes can easily be made without advanced technology (or aliens). And it can all be done from ground level.

But I must first remark on a common myth. It’s often claimed the Nazca shapes can only be seen from the air. In fact, they’re also visible from the hills surrounding the Nazca plain. So concluding “they must be designed to be viewed from the air” isn’t entirely sound.

The photo above shows one of the shapes you probably saw on that Nazca episode. It’s called “The Condor” and it’s 134 m (440 ft) from beak to tail. Other shapes are even larger. [image courtesy of Diego Delso, CC BY-SA 4.0]

The fact that these shapes were drawn before the era of surveying transits, manned flight, GPS, or Google Earth is commonly used to support the idea that advanced alien technology must have been involved. However, there were crude forms of surveying using basic geometry and celestial navigation that date back to at least 2700 BC. And for the drawing of shapes only the simplest surveying techniques would be required.

To illustrate my point, there’s a childhood drawing game you might have played. The Game Master prepares ahead of time by cutting a “mystery image” into tiny squares, say 1″ x 1″, and numbers them on the back. We’ll use the condor shape as an example to show how this is done: 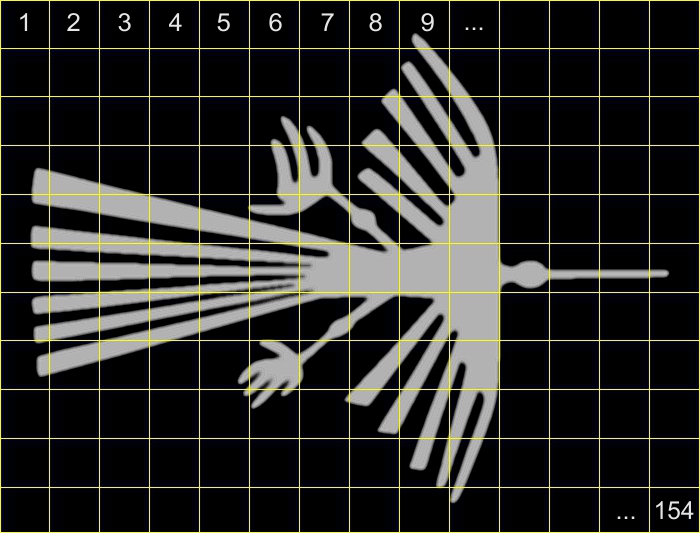 Next, full-size sheets of drawing paper, say 12″ x 12″, are also numbered. Blank squares are retained by the Game Master. Squares with parts of the image are paired with the same numbered blank sheet for distribution to the participants. Piece #9 would be the first in this example. Piece #50 would be the last.

Participants are then told to draw on the large piece of paper whatever they see on the small cutout piece. When all are finished drawing, assembly begins. Pieces of the large image are added sequentially, usually on a wall. Whenever I played the game, I was always amazed at how well the drawing fit together. And we were all just “eyeballing” it without making measurements.

A similar process can be used to create large shapes on the ground. All you need is the original subdivided drawing and a rectangular grid laid out on flat land. Such grids can be accurately constructed using knotted ropes to measure grid sides and diagonals. Plus, in a project like this the surveyors can extend the drawing from one square to the next with precise continuity. There’s nothing mysterious about the process.

What on Earth? is a popular show, and I usually enjoy it just for the photography. But I have to say they tend to overemphasize the “mystery” in many cases. But I guess that makes for “good television” since they’re in their fifth season now. If you’re interested in seeing NASA’s version (a blog with the same name) check out:

Next Week in Sky Lights ⇒ Neutrino Detection by IceCube