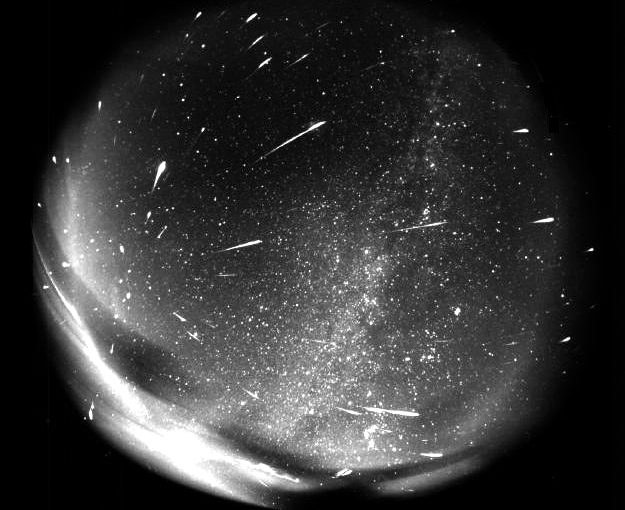 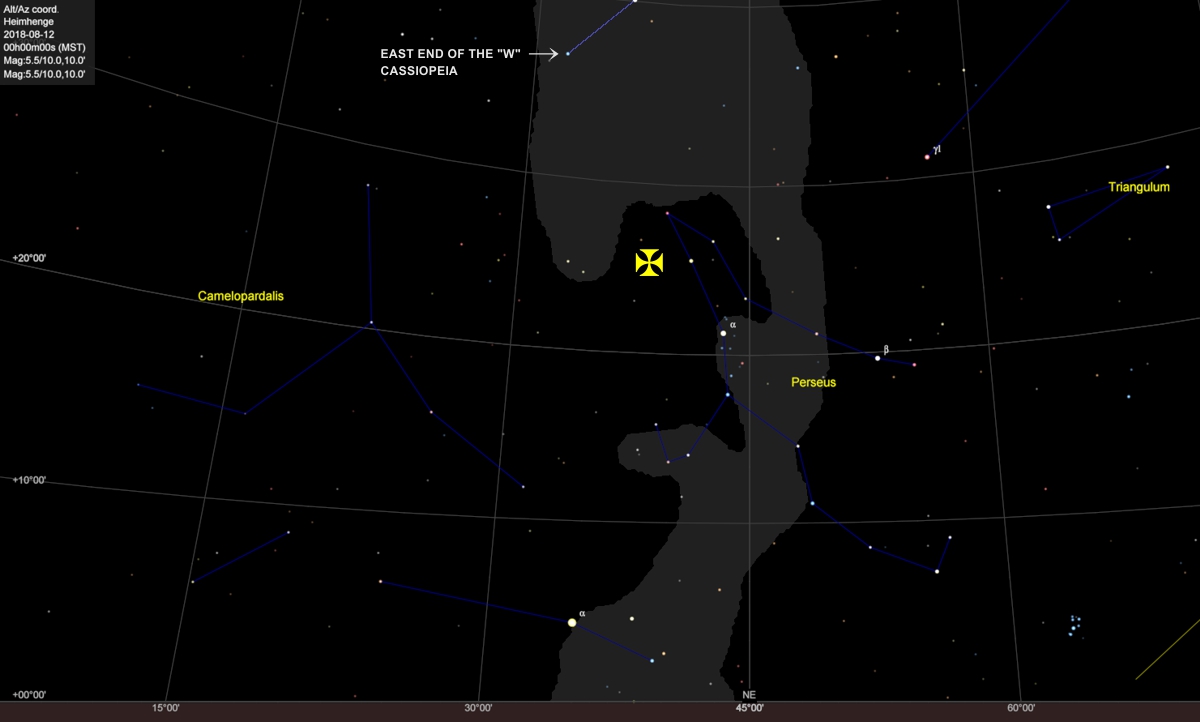 The 2018 Perseid meteor shower peaks August 11–13, conveniently on a weekend. The (nearly) New Moon will set well before midnight — the starting time of greatest meteor activity. Most Perseid meteors will seem to come from a radiant point between the constellations Perseus and Cassiopeia (the “big W”). The chart above shows the sky at midnight from my location in Arizona, but if you can find Cassiopeia that’ll be all you need to set up your chairs. Click on the chart for a larger version.

Here’s a photo showing what the radiant looked like for the Leonid meteor shower on Nov 17, 1998. This was taken using an all-sky fish-eye lens and a four hour exposure, so it’s not what you’ll see at any one time (unless you get really lucky). The camera captured a total of 156 meteors, most of which seem to come from the radiant. Click to enlarge. 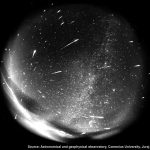 The Perseid radiant will rise in the east around 21:00 but you can get started viewing as soon as it’s totally dark. As with all meteor showers, activity increases after midnight and is greatest just before dawn. If you want to understand why that happens, see my April 16, 2018 post about the Lyrid meteor shower.

Not all meteors you see will come from that radiant. Another meteor shower with a broader peak (the Delta Aquarids) overlaps the Perseids and can contribute its own fireworks. And on any given night, you’ll see “rogue” meteors from random directions if you watch long enough. Predictions for this year’s Perseids are up to 90 meteors/hour at the pre-dawn peak on Aug 13.

Perseid meteors come from a stream of debris left behind by Comet Swift-Tuttle. This debris orbits the Sun, as does Earth, but it’s orbit is elongated and tilted in a different plane. Over time, the debris has dispersed around the entire length of the comet’s orbit. But the debris distribution is far from uniform, and there are “clumps” where debris is more concentrated. When Earth passes through one of these clumps you’ll see more meteors. Astronomers have mapped the debris stream so approximate activity predictions are possible.

Your observing site should provide a clear view of the northeastern sky and as much as possible in other directions. The top of a hill or a flat roof works well. Reclining lawn chairs are perfect for a comfortable view of the sky above. And most importantly, turn off all outside lighting as well as any inside lighting that spreads to the outdoors. The darker it is the more meteors you will see. Remember that it will take a good 30 minutes for your eyes to become dark adapted after exposure to any bright lights. Happy hunting and clear skies!

Next Week in Sky Lights ⇒ What On Earth?