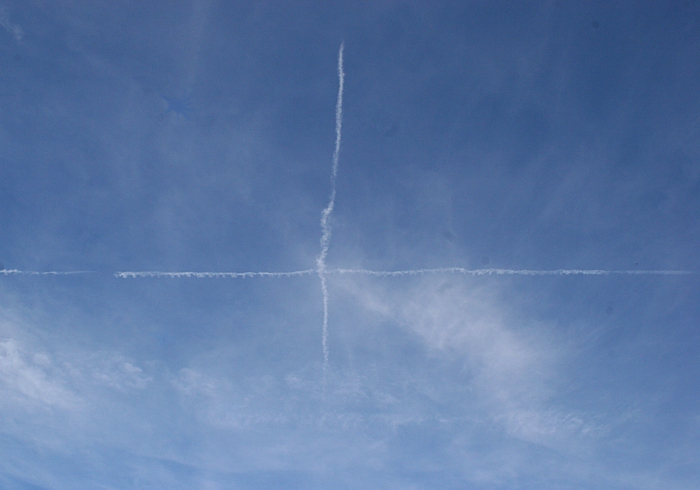 Question: We got this assignment in science class to take a photo of “something interesting in the sky.” So when I went out to look for something I got lucky, because there were these two trails in the sky that made a perfect cross shape. I’m pretty sure they were the kind of trails jets make, but I didn’t see or hear any jets. We have to write a paragraph describing what we photographed, so I have two questions. Are these really jet trails? And if they are, how come the jets didn’t collide? — RR, Toledo, Ohio

Answer: I can say with 100% certainty that these are jet trails. Their formal name is contrails (short for “condensation trails”) and I explained why they happen in my Jan 1, 2010 post Strange Trails in the Sky. Coincidentally, that post also shows crossed contrails (which really aren’t that uncommon), but the question only asked about what they were.

Once formed, contrails can persist long after the jet has left the scene. Sometimes they evaporate almost immediately, but with cool moist atmospheric conditions they can last for an hour or more. So the two jets could have passed through that “intersection” at different times — or they might have been at different altitudes. It’s obvious the jets didn’t collide or the trails would have looked more like this (click to enlarge): 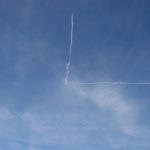 If you ever see trails like that, call 911 or the FAA.  [My apologies for doctoring your photo.]

The image you sent was high resolution, so I was able to enlarge the area where the contrails “intersected.” Looks to me like the top-to-bottom contrail goes under the left-to-right contrail. If one jet had flown directly through the other jet’s contrail, the shock wave would have disrupted the cloud’s smooth linear shape. Click on the thumbnail below to see the enlarged version: 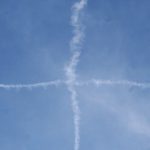 FYI, the FAA has rules about which altitudes can be used depending on which direction you’re flying. You can read the official code here. This rule is designed to reduce the likelihood of mid-air collisions.

I hope this gives you enough information to explain your photo. It’s probably more than you need, but when your assignment is to write one paragraph, that’s usually the minimum required. Write two or three paragraphs instead and really impress your teacher. And thanks for the great photo!

Next Week in Sky Lights ⇒ Missed It By That Much

Monsoon Haboobs
Missed It By That Much
HOME