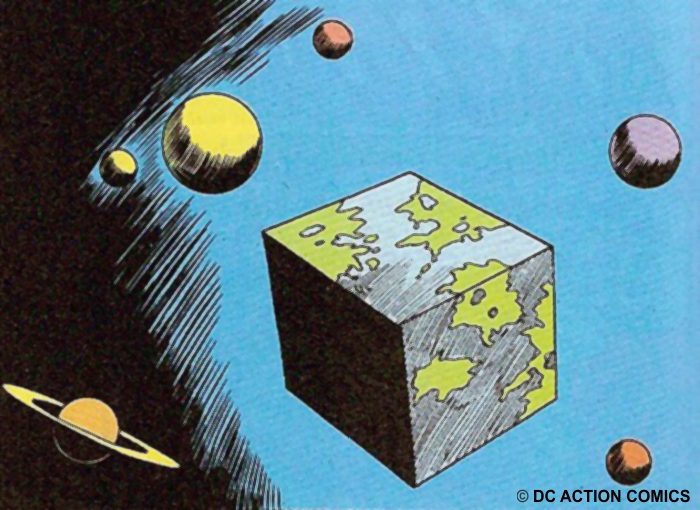 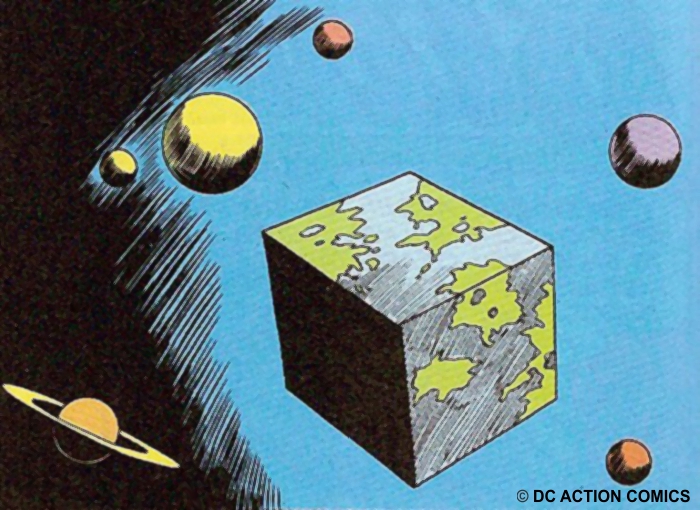 Question: I’ve been reading some old Superman comics, and they have this planet called “htraE” (“Earth” spelled backwards) inhabited by a race of imperfect Superman clones. They’re called Bizarros. Everything is backward there. Ugly is beautiful, evil is good, poor is rich, etc. And instead of their world being round it’s shaped like a cube. Is that possible? The only planets I know of are round. — LL, somewhere in Metropolis

Answer: The top image is © DC Action Comics ca. 1960. I use it here under the Fair Use provision of copyright law to show my readers what you are asking about. What it portrays is impossible. The answer to your question is a resounding no — by definition and by the laws of physics.

First, by recent IAU definition, a “planet” is:

“… a celestial body that (a) is in orbit around the Sun, (b) has sufficient mass for its self-gravity to overcome rigid body forces so that it assumes a hydrostatic equilibrium (nearly round) shape, and (c) has cleared the neighborhood around its orbit.”

The term hydrostatic equilibrium is just a fancy way of saying “The body is compacted to the point where it is shaped like a sphere.”  Gravity is what does this compaction, and all celestial bodies have gravity, so if they are made of a gas or liquid they will easily assume a spherical shape. For any volume of material, the sphere is the shape with the minimum surface area and lowest potential energy. By comparison, a cube with the same volume has 24% more surface area.

But if the body is made of a solid material, like ice or rock, the rigidity of the material will resist compaction into a sphere. Unless the gravity is very strong, a non-spherical solid body will remain non-spherical — like most of the asteroids. If the body’s diameter exceeds 1000 km (600 miles) gravity will be strong enough to “squash” even rock into the more-compact spherical shape. The strength of gravity is directly related to the body’s mass.

Let’s imagine an Earth-sized planet with just one “mountain” reaching to the vertex of a circumscribed cube (graphic below). Earth has radius of 6378 km (3959 miles). It’s a simple exercise in geometry to prove that mountain would have a summit 4700 km above the equilibrium sphere, and a base diameter of 2706 km (ignoring the slight spherical cap of Earth). Here’s what that model would look like: 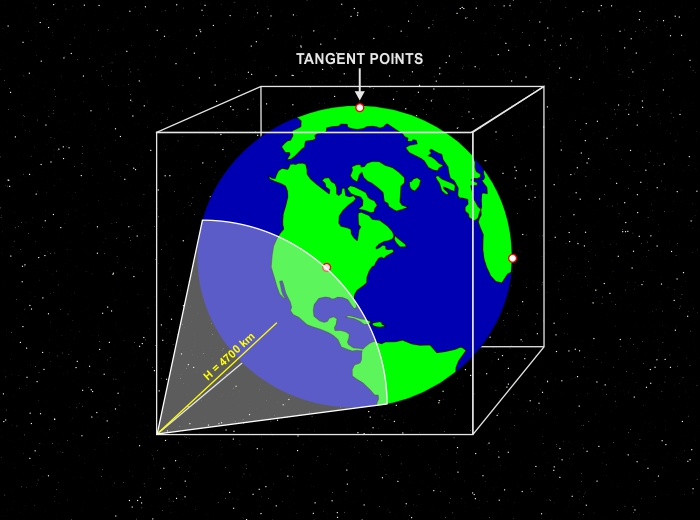 This is obviously not a complete “Bizarro World” but it provides a workable model for analysis. That conical mountain would have a volume of:

This volume of rock, say granite with density 2750 kg/m3, would have a mass of:

The mountain would weigh:

Granite has a compressive strength σ = 1.30 × 108 Pa (19,000 psi), which is exceeded here by a factor of 325. The mountain is unstable. The granite at its base would be crushed by the weight above and flow like a thick “liquid” until the height is reduced to a stable value. Bizarro World is not possible — at least using the known materials from which planets are made.

If Bizarro World were asteroid sized then it could be cubical, but the story line has it “about the same size as Earth” with continents and oceans. Although I have to wonder what those oceans are doing at the edges and vertices of that planet.

For an additional insight, we can relate all the relevant variables in a single equation: H = 3σ/ρg. This assumes a mountain with similar conical shape (vertex angle = 32°). The actual vertex angle depends on the material. Loose sand, for example, will naturally assume a broader angle. But real mountains are made of granite and are generally steeper than dunes, so we’ll go with a 32° vertex. What is the height limit for such a mountain on Earth? We can calculate that limit as:

The highest peak on Earth is Mt. Everest, at H = 8848 m  (5.5 miles). This tells us two things. First, our model is reasonably accurate. Second, although geologists tell us Mt. Everest is still growing by 6.1 cm/year, it will reach its height limit in about 100,000 years (if current tectonic plate activity continues).

Of course, with materials other than granite, or on planets with weaker or stronger gravity, different height limits are obtained. See my Nov 28, 2016 post: Why Mars has Taller Mountains than Earth.

Next Week in Sky Lights ⇒ Mars at Opposition