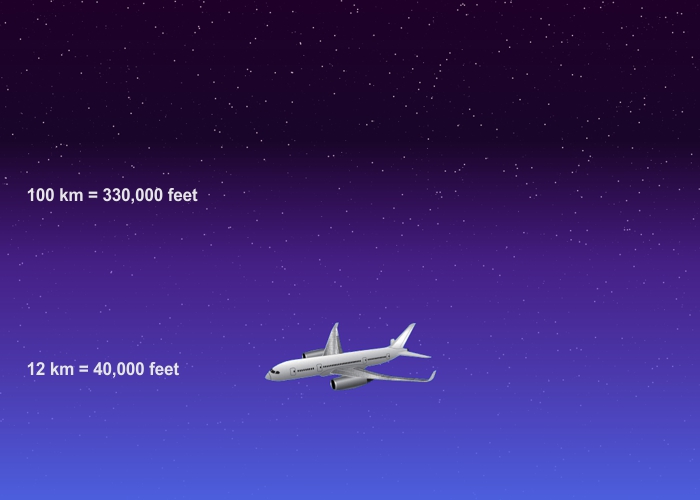 Question: I flew on a jetliner last weekend and was lucky enough to get a window seat. While enjoying my view, just out of curiosity, I decided to look up instead of down. There were no clouds, and what I saw seemed like a distinctly “light violet” colored sky instead of the usual blue. Is the air a different color higher up? I think we were flying at close to 40,000 feet. — JH, Seattle, Washington

Answer: The short answer is yes. The sky at altitude becomes increasing violet tinged, but you have to remember that air itself is (nearly) transparent and has no intrinsic color. The color of the sky is caused by a phenomenon known as Rayleigh scattering. See my July 1, 2011 post for more about that.

The higher your altitude, the less dense the air and the smaller the air particles. As you ascend to greater altitudes you’ll find less molecular oxygen and nitrogen, less water vapor, and more monatomic species including hydrogen and helium. Molecules at high altitude undergo photodissociation from the intense solar UV radiation. When you look upwards from 40,000 feet you’re looking into the light scattered by these higher altitude gases. Shorter wavelengths like “violet” begin to predominate over the usual “blue.” It’s a subtle color change but you’ll see it if you look for it.

The human eye is far more sensitive than cameras to these slight color variations, but you can see a hint of it in this NASA image taken from orbit. The Moon hanging in the background is a nice bonus. Click to enlarge. 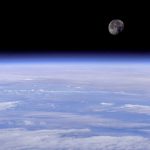 Even at the top of an “average” mountain, say 3000 meters (10,000 feet), you’ll see the sky overhead is a deeper shade of blue. The transition from blue to violet is gradual, but at the altitudes typically used by transcontinental airliners the violet really starts to kick in. And, if you know where to look, the brighter stars can be seen.

By the time you get to 100 km (which you won’t in a jet) there’s not enough air to scatter any sunlight. As long as you don’t look toward the Sun, all you’ll see is the blackness of space filled with stars. My main graphic is not to scale, and the visual transitions are exaggerated, but it shows an approximate simulation of these optical effects.