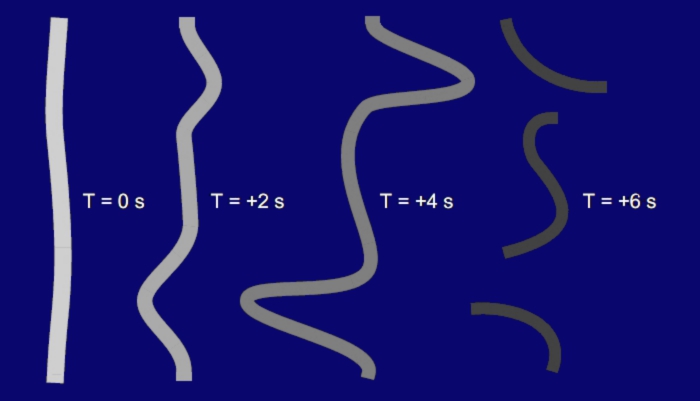 Question: I was watching the Geminid meteor shower last December, and had my binoculars with me just to scan around while waiting for shooting stars. I saw this one really bright fireball that left a glowing trail, so just out of curiosity I looked at the trail with my binoculars. It glowed for almost 15 seconds before it faded out, so I had some time to watch. What I saw was very weird. The trail was “undulating” like writhing snake. I could see it changing in real time. Was this caused by some strange gas in the trail? — RX, Billings, Montana

Answer: I’ve seen that effect too and the explanation is simple. The trail contains no exotic substances — the undulation you saw is the result of external winds. I wrote an article about this some time back in a monthly column I did for the Phoenix Astronomical Society’s newsletter PAStimes. Always looking for ways to recycle old material, I present it here with my original grayscale logo (below). The main graphic (above) has been colorized for effect. Too much grayscale is boring.

This year I watched the annual Perseid meteor shower, as usual, from the roof of Heimhenge. But unlike previous years, I had my trusty 11×80 binoculars at hand. My plans were to use them for leisurely scanning, just in case the shower fizzled. But after the first few good fireballs, I decided to look at the trail of the next one through binoculars. What I saw amazed me!

Its trail was very clearly visible in my contrast-boosting 11x80s, but the real surprise was the rapid evolution of the trail’s shape and intensity. The graphic shows, in left-to-right sequence, how the trail changed over a 5-6 second period (none of the trails lasted very long this year). I didn’t get a photo, so I drew this from memory. The “trail morphing” was puzzling at first. But after a little bit of thought, I realized the sideways undulation of the trail must be caused by varying wind directions at different altitudes — what meteorologists call wind sheer. [See my April 9, 2012 post How They Steer Hot Air Balloons for a great photo of that effect.]

Unlike the contrails of most jets (which spend a fair amount of time at the same altitude), a meteor is penetrating the atmosphere from above. “First light” occurs typically around altitude 80 km (50 miles), so it must pass through several layers of air on its way down — and all these layers are moving in different directions. What surprised me most was the trail’s rapid breakup well before any individual segments had faded from view. I didn’t think to check the weather info, but perhaps the jet stream was overhead that night?

Most of the light emitted by a meteor is caused by the recombination of ionized nitrogen, a fairly short-lived process seen in the trail of your typical quick and faint meteor. Nitrogen ions emit the “electric violet” color seen in these trails, same as in lightning and other sparks in air. Only fireballs, meteors that add their own chemical content to the spectrum, produce trails that persist for significant fractions of a minute. Such meteors are often quite colorful.  The reds, greens, and yellows seen in fireballs tell us something is burning — chemical reactions are happening.

These Perseid fireballs must have been penetrating some really “fast air” with winds acting in opposing directions. Next time I’ll have to get some numbers and check the wind speeds at altitude. Wouldn’t it be interesting if multiple fireballs crossed the jet stream? If sufficient numbers participated, their trails could actually “map” the jet stream as a narrow band of rapid trail breakup.

The annual Lyrid meteor shower will be on April 21 (more about that in a few weeks). There won’t be much of a Moon, so if your sky is clear it could be a good show. And it conveniently happens on a Saturday night. If you get a chance to do some falling-stargazing, bring your binoculars along and hope for a glowing trail.