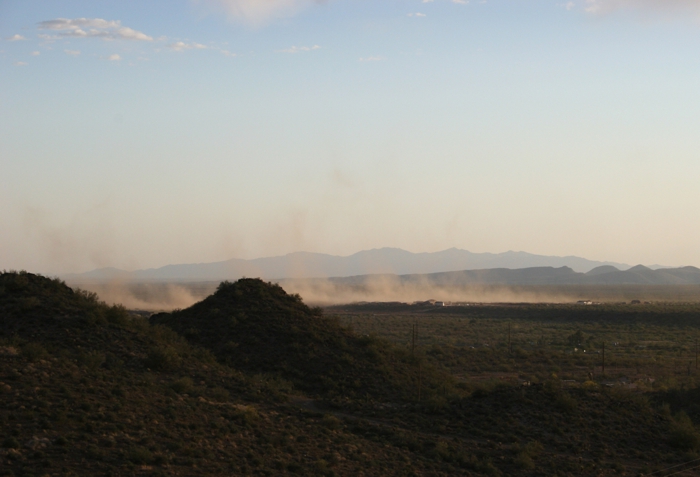 Question: I live in the New River area, maybe a mile from your place. I’ve noticed a lot more dust in the air lately, hazy sunsets, fuzzy night sky. My wife swears she’s dusting more often. I know we live in the desert, so I expect a little dust, but what’s up? — RR, New River, AZ

Answer: Greetings neighbor. I’ve seen what you describe, probably more so from my hilltop vantage point. There’s been a definite increase in airborne dust of late. Part of the reason, of course, is our extended drought. But in the New River area there’s a new source — construction dust. Look at the photo above.

That might seem like an “eat my dust trail” left behind by someone tearing across the open desert on an ATV, or maybe a mini dust storm rolling from left to right, but it’s just the leading edge of a wind gust moving across freshly disturbed desert soil. And there wasn’t that much wind — maybe 20 kph (15 mph) tops.

To get a real dust storm you need much higher wind speeds. Desert soil in the Southwest is well-baked and hard-packed in most places, and it’s a real chore to dig through. It takes wind speeds of at least 45 kph to get the sand moving. But as it turns out, the area shown in the photograph is a 3 km2 (700 acre) housing development about 6 km southwest of New River, and the crews have been doing a lot of excavating and grading.

Arizona law requires developments like this, or any project that moves a lot of dirt, to use water trucks for dust suppression. Truth be told, most contractors are duly diligent about this. Click on the thumbnail below to see a water truck in action. 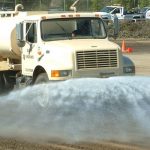 To readers in areas where the soil is always moist, and sticks to itself well, this may seem like a tremendous waste of water (especially here in the drought-stricken Southwest). And it does use a lot of water — each of these trucks carries 2000 gallons and runs from dawn to dusk, refilling as needed, and at larger construction sites there can be a fleet of these trucks at work. But dust suppression is necessary for Arizona to comply with the EPA’s airborne particulate standards. Even so, “air quality alerts” are a common occurrence in Phoenix.

Phoenix maintains a website with data for the air quality index (AQI) updated daily. Other cities in the Southwest do the same. Air quality is more of a problem for Phoenix because of local topography — surrounding mountain ranges effectively enclose the metro area like a valley. With a population of 4.5 million there’s a lot of smog from vehicles. During the winter, when people tend to light their fireplaces or fire pits, the problem is exacerbated and often prompts the declaration of “No Burn” days with fines for violators.

The photo at top was taken over a holiday, when all the crews were off the job. So the freshly disturbed soil in that development got a chance to dry out, and the wind did what wind always does to dry sand. The Southwest is a beautiful place to live, especially in the winter. You just learn to put up with the extra dust. Interestingly, even on a still day (except after a heavy rain) there’s literally tons of fine dust suspended in the air over Phoenix.