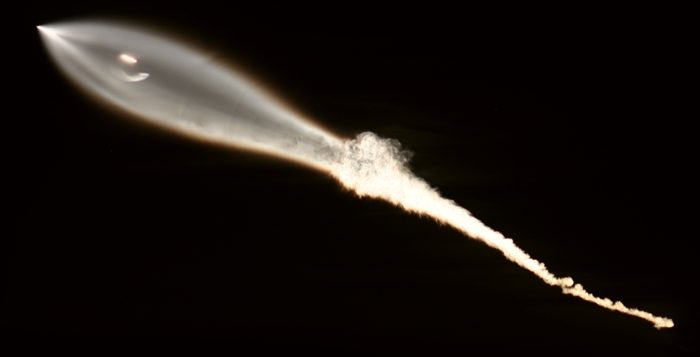 On the evening of December 22, 2017, a SpaceX Falcon 9 rocket was launched from Vandenberg AFB on the coast of California. It lit up the sky with a spectacular display visible from most of the Southwest. Not surprisingly, it triggered a lot of 911 calls about UFOs and North Korean missiles. Launches are announced ahead of time, so I and many other astronomers here in Arizona were ready to capture it on video.

There were three factors converging to make this a great show: weather was predicted clear, the rocket was burning LOX and RP-1 (which makes a much more visible exhaust than LOX and H2), and the launch was scheduled to occur about an hour after sunset Arizona time, so our sky would be dark but the rocket (800 km west of here) would still be illuminated by the Sun.

I knew exactly where to point my camera courtesy of Google Earth. Vandenberg AFB is at a heading of 274.57° from my location (about 5° north of due west). Click the map to enlarge: 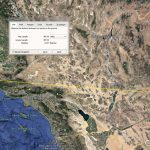 But as you’ll see, pointing wasn’t my problem. I selected a 200 mm telephoto expecting to need the magnification, but I should have used a fisheye lens. My camera was triggered by an intervalometer to shoot an image every 4 seconds, so I was expecting to sit back and watch the show while the camera did the work. Instead, I had to scramble and reposition the camera four times to keep the rocket in the camera’s FOV. Here’s the EXIF:

Several interesting features during the launch are visible in the video:

Next launch I’ll be using my fisheye lens, and a shorter exposure to avoid the saturation that wiped out details during earlier parts of the launch. And I’ll shorten the time lapse interval for smoother motion. I don’t have a video mode on my older-model camera, so time lapse is my only option. Others astronomers produced far better videos of this launch.

Local amateur astronomer Jeremy Perez put together this excellent wide-angle video he shot from Mount Elden, which includes real-time and time lapse segments. You can watch it here. https://vimeo.com/248630010

And Rick Scott captured this wide-angle still image that shows stunning detail (click to enlarge). You can see more launch images, and others natural wonders, in his Natural Images Gallery. 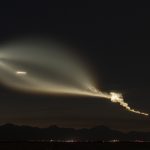 I expect to see these launches more frequently as SpaceX ramps up its operations. We are moving into the age of commercial space travel and launches for hire. SpaceX is joined in this venture by others like Virgin Galactic, Blue Origin, Bigelow, and SpaceDev. Launches just might become so commonplace that they’ll stop generating 911 calls. Maybe.