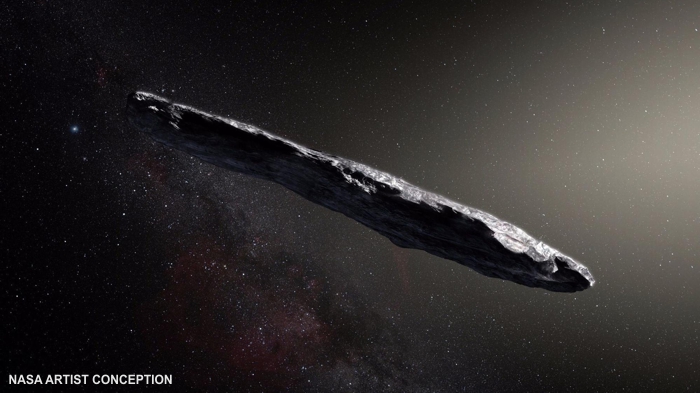 Question: I read about this strange object called Oumuamua that’s passing near us in space. They say it comes from outside our solar system and that it’s an “interstellar visitor.” How do we know how far away this thing came from? — PM, Hawaii

Answer: The short answer is that the object’s speed, which peaked at 87.7 km/s (196,000 mph) at perihelion, is too fast for it to be a “member” of our solar system. It’s incoming trajectory was from the direction of the star Vega, and was nearly perpendicular to the plane of the solar system — a highly unusual trajectory. It’s speed is currently 38.3 km/s as it recedes from us on its outbound trajectory toward the constellation Pegasus.

It was discovered on October 19, 2017 by Robert Weryk using data from the Pan-STARRS 1 telescope in Hawaii, hence the name which means “visitor from the distant past” or “visitor from afar arriving first” depending on which translation you read. Both are good descriptions. It’s formal designation is 1I/2017 UI, with the “1I” being a new category of asteroid created by the IAU (the “1I” means “first interstellar”). Oumuamua is on a hyperbolic trajectory — a path that passes through our system but never returns.

Another unusual feature is its record-breaking aspect ratio of around 6:1. Oumuamua is shaped like some kind of cosmic cigar, with a length 6X its diameter. We know this from its light curve which varies in brightness by ±1.8 magnitudes as it rotates once every 7.3 hours. When it’s “broadside” it reflects more light; when end-on it reflects the least. The ratio of the brightness differences allows calculation of its aspect ratio (assuming uniform surface composition). The most extreme aspect ratios previously observed in our solar system range from 2:1 to 3:1.

Beyond that, we don’t much know what it looks like. Its dimensions are (roughly) 180 meters in length and 30 meters in diameter, so it’s just too small (and fast) to image directly. From spectral data, we know Oumuamua has a “reddish-black” color, likely from exposure to cosmic rays, and could be billions of years old.

To answer your question about the distance it came from, we need some physics. The outer boundary of our solar system is the outer edge of the Oort Cloud, some 3 ×1013 km from the Sun. If Oumuamua was originally at that distance, and for whatever reason (gravitational perturbation, collision, fragmentation) lost all its orbital speed and started falling toward the Sun, its speed at perihelion would be 83 km/s. Oumuamua’s observed speed was greater by 6%, hence it must be of interstellar origin. The proof requires some calculus, but if you’re up to the challenge just click on the thumbnail below: 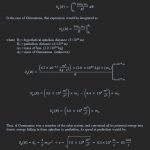 Not surprisingly, some have speculated this object may be the equivalent of the interstellar visitor in Arthur C. Clarke’s classic Rendezvous With Rama. Clarke’s ship was a similar long cylindrical structure, artists impressions of which you can see here. Alas, unlike Rama, Oumuamua is emitting no beacons or transmissions, and it’s also tumbling, so it’s likely just an odd-shaped chunk of rock passing through our neck of the galaxy.

Astronomers estimate that interstellar interlopers like Oumuamua transit our solar system several times each year, but they have remained undetected until now. The latest generation of telescopes and sky surveys have brought these enigmatic objects into view. Plans for a sample return mission from some future interloper are now taking shape.

Interestingly, both Voyager spacecraft, and Pioneers 10 and 11, are on interstellar trajectories. Likewise the more recently launched New Horizons spacecraft that explored Pluto. All are currently moving at speeds from 10–15 km/s (22,000–34,000 mph). Their speeds will decrease slowly as they climb out of the Sun’s gravity, but in a few tens of thousands of years they will feel the gravity of other stars — and begin accelerating. When they pass through those alien solar systems they will, like Oumuamua, exhibit interstellar speeds. Whether anyone will be watching is the really intriguing question.