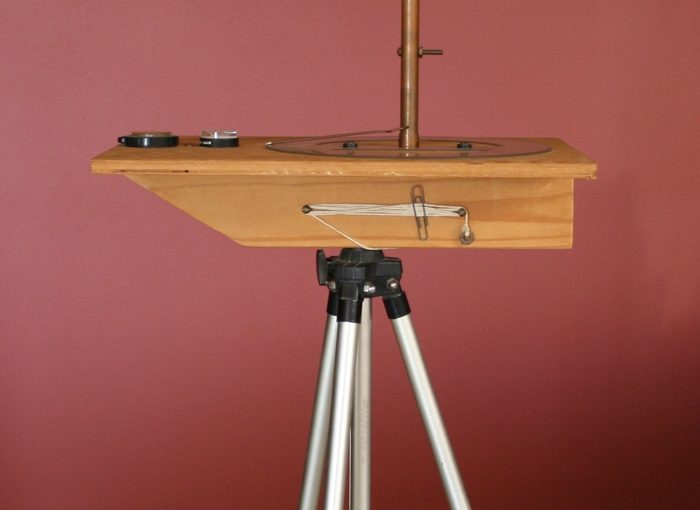 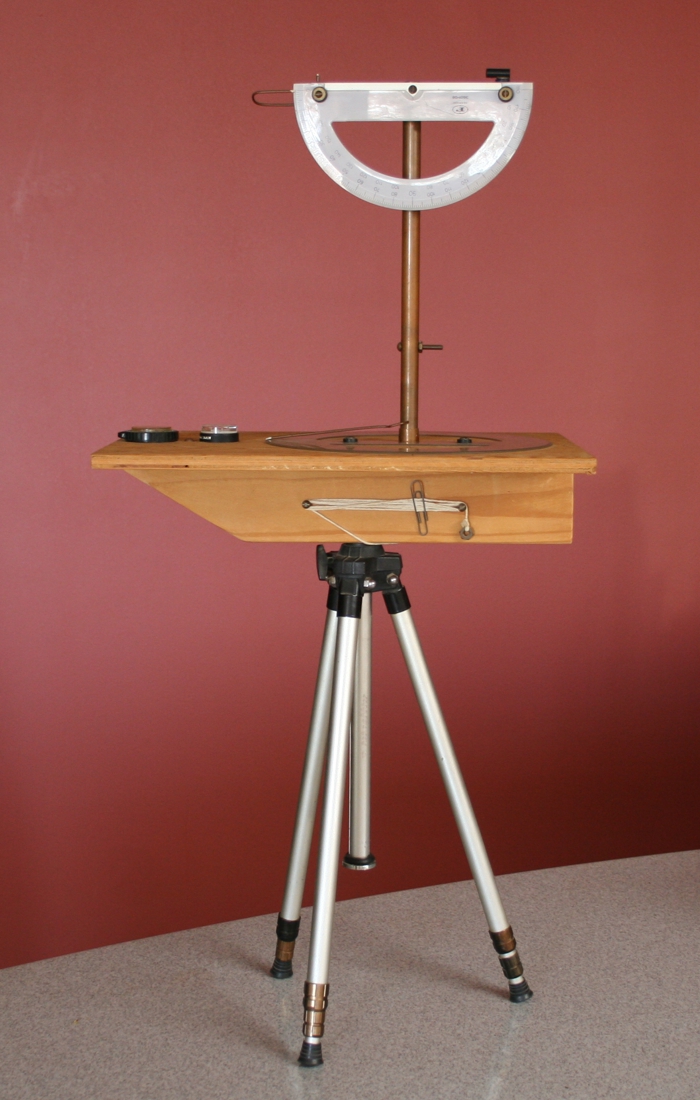 Question: In your post about fisheye lenses [Cumulonimbus Rising v.3] you mentioned how you knew the angular size of the images, like 76° by 49° in your final cropped frame. I know the FOV for my Canon 18-55 mm lens because it’s in the manual. But when the optics get more complicated, how can you tell what the FOV really is? — AEA, San Francisco, CA

Answer: One word, AEA … theodolite. If you follow that link you’ll see some expensive examples, all involving high-quality optics, GPS, and digital displays. If you’re a surveyor, that’s a tool of the trade. But for photographers and (amateur) astronomers, if you’re skilled in DIY, you can build a less-expensive equivalent that has an accuracy of ±1°. If you’re a physicist, or an optical engineer, you could calculate the FOV from theory, but for others I suspect my simple solution will provide adequate precision.

The photo above shows a theodolite I built for an astronomy project in school. This is what I used to measure my actual fisheye FOV. Note: The wound-up string on the side is actually a plumb bob that hangs directly below the vertical mast. That’s an optional feature, but I needed it to help establish baselines when I used it for construction surveys on my property.

Most of the parts can be found around your shop. I happened to have a spare tripod to mount my device, but any solid surface (and some shims) would suffice. Note that, because a magnetic compass is incorporated, all metal parts are aluminum, brass, or copper. All the rest are wood or plastic. There’s a lot of flexibility in my design, so feel free to improvise. The goal is to create a tool that accurately measures vertical and horizontal angles (elevation and azimuth).

Regardless of how you improvise, the critical (and toughest) part of the construction is alignment. When the pointer for elevation readout shows 0° the line of sight must be horizontal. If you have a clear view of a distant horizon (like across a large body of water) you can simply sight on that horizon and be guaranteed it’s level — as long as you’re not sighting from the top of a mountain. Lacking that option, I set a line level on the bracket the elevation protractor is attached to. That established horizontal, after which I bent the copper elevation indicator to point exactly at 0°. Click on the thumbnail below for a closer look. 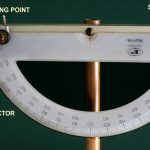 For the azimuth measurement you’ll need a 360° protractor. You could probably make a pair of 180° protractors work if you’re willing to cut some plastic and properly align them, but a single 360° is much easier. A circular bubble level is essential, so I glued one to the azimuth platform. A compass isn’t needed for FOV measurements, but as I said, this was originally built for astronomy and I needed to be able to align the theodolite to true north. So I also glued my old Boy Scout compass to the azimuth platform. Here again the azimuth indicator needs to be calibrated (bent) so that it points in the same direction as the sighting tube. You don’t need to sight on a distant object to align it — I took the theodolite out in the sunlight and simply adjusted the pointer to be parallel to the shadow of the sighting tube. Check out the thumbnail below. 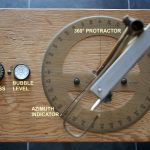 Of course, even if elevation and azimuth are set accurately, to get the two synced the vertical mast must be perpendicular to the azimuth platform. This was one of the tricky steps during fabrication. You can barely see it in the top image, but what I did was use a copper coupling sized for the ½” diameter copper mast. That coupling was glued into a hole drilled into the 2×4 base using a drill press to ensure the mast would be vertical.

So here’s how I measured the FOV of that fisheye lens (after photo cropping). I set up my theodolite where my camera took that photo. No need to align it to true north for something like this. Referring to a copy of the photo, I sighted on distant objects at the far left and right of the image, measured their azimuths, and then subtracted the two values. Then I sighted on objects at the top and bottom edges, measured their elevations, and again subtracted. The results were a 76° horizontal FOV and a 49° vertical FOV. Using the Pythagorean Theorem, that gives a diagonal FOV of:

Not sayin’ you should rush out and build your own theodolite — I just happened to have one that was already built for astronomy. But it does come in handy if you want to do some basic surveying, measure sizes of things in the sky, or establish photographic FOVs. Most people won’t ever need the extreme precision (and cost) of a professional surveying instrument, but building your own is a fun DIY project.