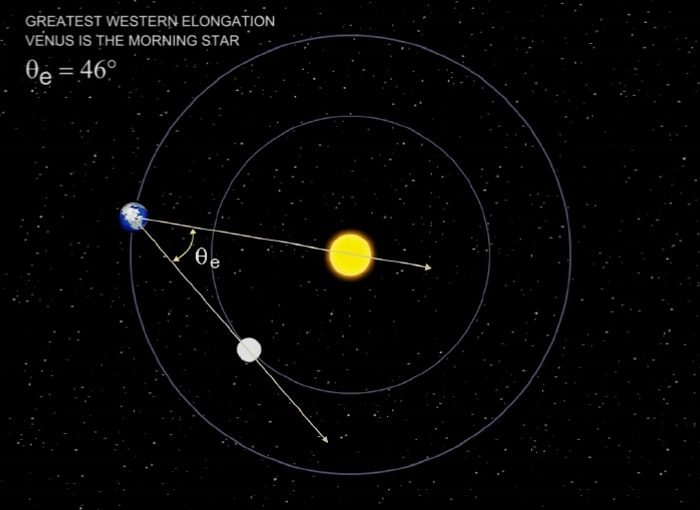 I start the animation at an arbitrary point with Earth and Venus aligned. In this configuration, Venus is said to be at inferior conjunction (as seen from Earth). Venus reaches the point of greatest western elongation (GWE) at 00:20. Venus is west of the Sun by 46° so appears as the “Morning Star” before sunrise. That’s what you saw on the morning of June 3rd, 2017. Perhaps you missed Mercury, also near its GWE? This close to sunrise faint Mercury is a bit harder to spot. Click on the thumbnail below for a chart of that morning’s sky. 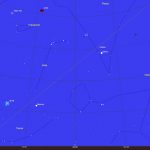 Earth chases faster-orbiting Venus, and 1.6 years (584 days) later creates the opposite geometry of greatest eastern elongation (GEE). Venus is then the “Evening Star” and will be visible after sunset. GEE occurs on August 17, 2018. Watch for it. You can’t miss it. Venus will shine as brightly as it did at GWE. When at GWE or GEE it’s 46° from the Sun, in a darker part of the sky, so you get the greatest contrast.

Earth takes 365 days (1.0 years) to orbit the Sun. Venus takes only 225 days (0.6 years). So it’s like a race on a circular track where the “outside runner” gets lapped every 1.6 years. This amount of time is known as the synodic period of Venus and is defined as the time between two successive GWEs, GEEs, or conjunctions.

That should answer your question, RW, but here’s some related history and math you might find interesting …

Back in the 16th century, Nicolaus Copernicus used this periodicity to calculate the true 225-day orbital period of Venus from its 584-day synodic period. He used basic algebra to solve what mathematicians call the “chase problem” with this formula:

where T is the period in consistent units (days or years). The same calculation can be done for Mercury. Outer planets like Mars require a slightly different formula.

The above link also shows how Copernicus used geometry to calculate the relative orbital radius of Venus using:

where 1 AU is the radius of Earth’s orbit. As Johannes Kepler discovered later, the planets’ orbits are not exactly circular, but they’re close enough to give reasonably accurate results with simple trigonometry. Again, the calculation for outer planets is a bit more complex but still doable using basic algebra and trigonometry.

To calculate planetary orbits in units of kilometers or miles you’d need to know the radius of Earth’s orbit in those units, and that was only roughly known in the 16th century. The first reasonably accurate measurement wasn’t made until 1672 by Giovanni Domenico Cassini. For that story, go here.

This goes a bit beyond what you asked about, but it was a great opportunity to teach something about the genius of Copernicus, and just how far high school math can take you when investigating the Cosmos.

Next Week in Sky Lights ⇒ Constructing a Theodolite

Q&A: Yet Another Strange Cloud
Q&A: Constructing a Theodolite
HOME