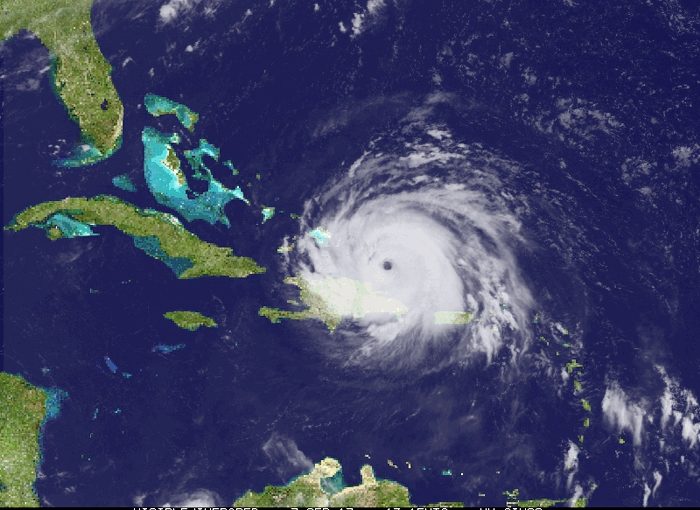 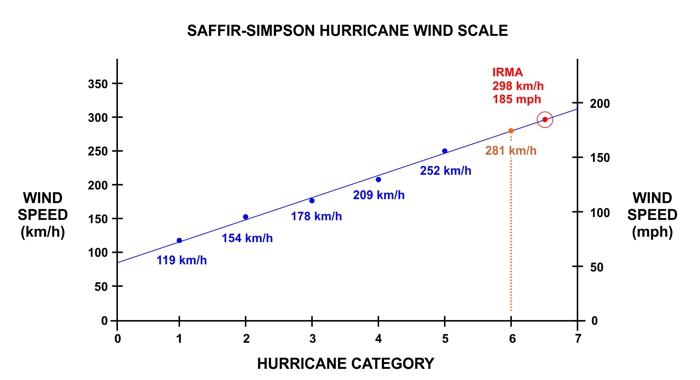 Question: I read in the news that Hurricane Irma was “off the scale” in terms of the usual category rankings, and that it was so far above a category 5 that they were thinking about extending the scale to include category 6. How does that ranking system work? And was Irma really a category 6?  — MM, Orlando, Florida

Answer: First we need to talk about that category scale and how it came about. It’s officially known as the Saffir–Simpson hurricane wind scale (SSHWS), developed in 1971 by civil engineer Herbert Saffir and meteorologist Robert Simpson (of the US National Hurricane Center). It divides hurricanes into five categories based on the speeds of their sustained winds.

And SSHWS only looks at the wind speeds. It ignores storm surge height, rainfall, extent of flooding, and location. For example, a Category 1 hurricane that hits a major city will do more damage than a Category 5 hurricane that hits a sparsely developed rural area. Of course, most coastal areas on the planet are highly developed and/or populated, so SSHWS has come under some criticism. Other systems have been suggested but SSHWS is well entrenched and we’re probably stuck with it.

The main flaw with SSHWS is that it stops at category 5, defined as wind speeds ≥ 252 km/h (= 157 mph = 137 knots = 70 m/s). When the scale was developed, hurricanes beyond category 5 were just not considered based on the historical records. They figured category 5 was the biggest hurricane possible, and that the damage caused by a category 5 couldn’t be any worse. Since 1971 three significant developments have exposed the limitations of the SSHWS categorization model:

The chart at top shows my extrapolation from SSHWS to categories higher than 5. Based on peak wind speeds, if the scale was extended, and if I’m allowed to interpolate, Irma was a category 6.5 hurricane by the time it reached the west Atlantic. After entering the Caribbean and encountering friction from island land masses it dropped below category 4. But when it veered north, the warm waters in that area added energy. By the time Irma reached the Florida Keys it had recovered to a category 4.1 storm. From that point on Irma’s wind speeds steadily decreased as it moved farther inland.

Check out the thumbnail below to see what Irma looked like in the NOAA satellite view from 38,500 km (22,245 miles) altitude while it was still off the Florida coast. Click to enlarge. 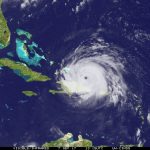 And then take a look at how it appeared from the ISS — at a mere 409 km (254 miles) altitude. It was too large to fit in the FOV of the standard cameras used on the ISS. That’s one scary looking storm. 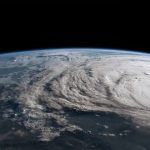 For all you math geeks out there, here’s a few notes about my extrapolation of the SSHWS. The model is set up mathematically as a step function. That’s why you never see fractional hurricane categories (like 6.5) reported. Likewise the Enhanced Fujita scale used to rate tornadoes, which runs from EF0 – EF5 and peaks at wind speeds of 322 km/h (200 mph). In contrast, the Richter scale used to measure earthquake magnitudes (M) is based on a continuous mathematical function that has no maximum value and allows for calculated interpolation. That equation is: M = log10[A/A0(δ)]. In practice, calculated values of M are rounded and reported to two significant figures, e.g., magnitude 8.1.

If you look closely at my SSHWS chart you’ll see that the line of best fit, which was needed for extrapolation and interpolation, does not pass through any of the original 5 data points. The original SSHWS data can only be precisely presented as a chart:

It’s that “≥” sign that generates the step function. The best you can do to describe this data with an equation is by using an approximate formula derived from the line of best fit: C = 0.0311 × VKPH − 2.66, where C is the category and VKPH is the wind speed in “km/h.” This works well for determining C to 2 significant figures, and it’s how I calculated the fractional category ratings for Irma. Of course, in the traditional SSHWS, you’d apply an integer function to the result and drop anything after the decimal point.

Next Week in Sky Lights ⇒ Anatomy of a Storm Surge