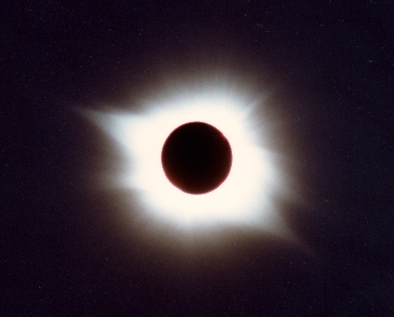 Question: What’s the big deal with this solar eclipse I keep hearing about on the news? I mean, eclipses happen pretty much every year, don’t they? — DT, Miami, FL

Answer: Yes, because of the geometry of the Moon’s orbit we must have at least two solar eclipses and two lunar eclipses every calendar year. But solar eclipses are only visible from a small area on Earth’s surface, and they can’t last longer than about 7½ minutes. By contrast, a lunar eclipse lasts close to 2 hours and can be seen from any point on the night side of Earth. So any kind of solar eclipse is a big deal.

The eclipse on August 21, 2017 is an even bigger deal than most for several reasons:

Below are some photos of earlier solar eclipses I’ve captured. At left is the total eclipse at Cabo San Lucas in 1991. At center is the annular eclipse near Dexter, New Mexico in 1994. At right is the partial eclipse of 2012 as seen here in Arizona (it was annular farther north). You can tell the Moon was too small to cover the Sun that time around.

I’ll have more information about the August 21 eclipse next week, along with some tips for observing. But if you’re keen to get started preparing see my Jun 11, 2012 and Dec 3, 2012 posts.

FYI: This post starts a 4-week series on solar eclipses. Follow Sky Lights and you’ll learn all you need to know.