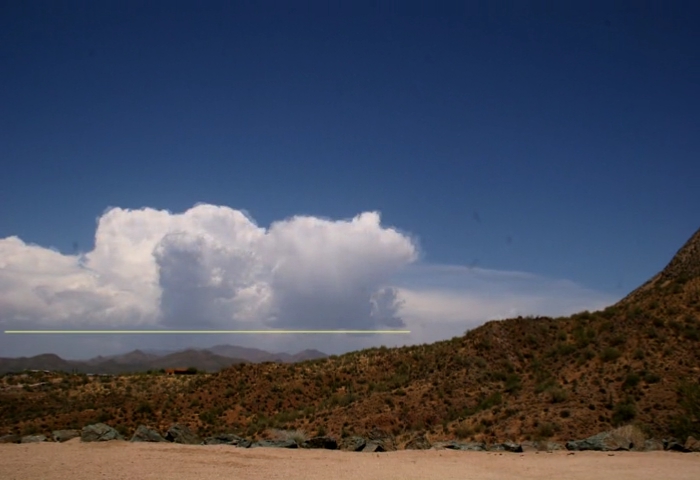 You can see v.1 in my Oct 3, 2016 post. The goal is to capture the evolution of a growing cumulonimbus cloud (frequent precursors to thunderstorms). It’s an experiment in progress — v.2 is better but still has some problems.

I often see time-lapse videos of cloud buildups on TV weather intros, cropped in time and space or cluttered with weather station graphics. What I’m trying to do is capture a full view of a large storm system from start to peak. Some rainfall and lightning near the end would be cool. That’s not as easy at it sounds, even with digital cameras. I’ll share some tips with you in this post if you want to try this on your own. Note that this is not a camcorder video — my older model camcorder doesn’t have enough memory for this purpose. This is a time-lapse sequence from my Canon EOS 20D using an outboard intervalometer (newer DSLRs have a time-lapse mode built-in).

But first, let me describe what you’re seeing in the video. It shows the buildup of a large cumulonimbus cloud over the Mogollon Rim during Arizona’s monsoon season. The view is toward the northeast. Rim elevation is 1500 m (5000 ft) and the distance to that cloud is around 80 km (50 miles). Humid monsoon air is forced by prevailing winds to climb as it ascends the Rim, and eventually reaches an altitude at which the temperature equals the dew point. That altitude is briefly marked in the video by a yellow horizontal line. For more about this effect, see my May 29, 2017 post. You can see the cloud growth accelerate around the 20 second mark. This is caused by the latent heat released as water vapor condenses, further driving the updraft. Near the end, as the cloud builds to an altitude of 4500 m (15,000 ft) it encounters another layer of air blowing from the west. This shears the cloud’s top into the classic “anvil” shape common for thunderstorms. Heavy rain, lightning, and winds followed later that afternoon.

The video was created by assembling 54 individual images into a video. Frames were shot at 60 second intervals and the video plays 60X faster than real-time (RT=0:54). I used a half-frame fade-in/fade-out transition between images to smooth the motion.

As I said, this video is better than my first attempt but there’s still room for improvement. Here’s some of the things I’ve learned so far about shooting this type of time-lapse …

The growth of a large storm system is fascinating to watch, more so if you understand the meteorology at work. It’s a classic demonstration of fluid mechanics, heat transfer, and phase transitions. It’s also just fun to watch, since most times our view of this process consists of intermittent “snapshots” — we notice the cloud is growing, but we don’t have the time or inclination to watch for an extended period. Videos like this provide that opportunity.

Next Week in Sky Lights ⇒ Why Every Solar Eclipse is Different

Q&A: Distance to the Horizon
Q&A: Why Every Solar Eclipse is Different
HOME