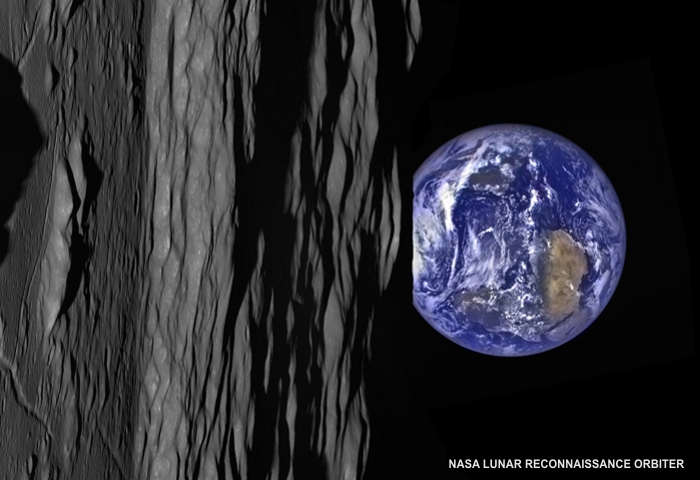 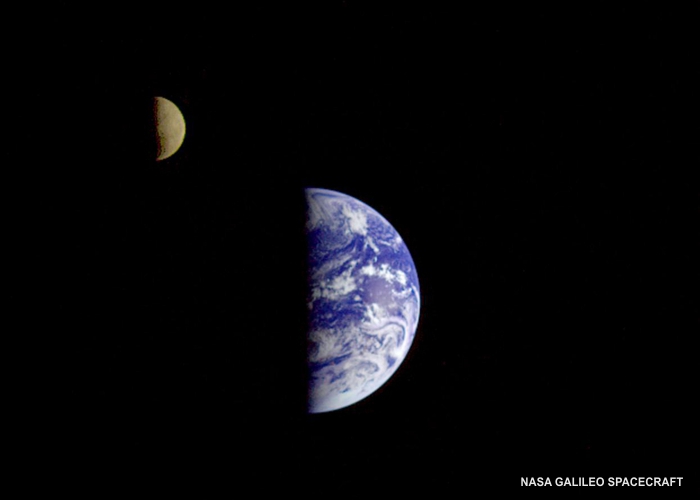 The Planetary Society recently released a set of 96 images showing Earth from space. Many capture the Earth and Moon in the same frame. There’s also a few time-lapse animations. You can see the entire collection here. I’ve selected my three favorites for this post and added some astronomical commentary.

At top is an image taken by the Galileo spacecraft on December 16, 1992, looking back from 6.2 million km while enroute to Jupiter. It’s actually a composite image taken through several filters to improve contrast between the brighter Earth and darker Moon (which is why no stars can be seen). The Moon is in the foreground moving left to right. Note the similar “quarter phase” on each body — the Sun is far off to the right. South is down. You can just see Antarctica through the clouds, and you can see the normally-hidden Aitken Basin impact crater near the Moon’s south pole (dark area).

This image shows Earth as seen over the lunar horizon by Lunar Reconnaissance Orbiter (LRO) on October 12, 2015. LRO is still on the job delivering high resolution photos and mapping the lunar surface. Again, this is a composite image using different cameras to enhance each object. It’s reminiscent of the famous “Earthrise” photo taken by Apollo 8 astronauts (first to circle the Moon), but of much higher resolution. Earth appears “full” in this image. The Sun is at the camera’s back, and as seen from Earth the Moon would be in its New phase. LRO is in orbit around the Moon from left to right, so Earth is indeed “rising.” That’s Australia visible against the blue Pacific Ocean.

My third favorite is this animation of the Moon transiting (passing in front of) Earth. The video is a series of frames taken by the Deep Impact spacecraft from a distance of 50 million km on its way to rendezvous with comet Temple 1. The video spans a time period of 24 hours (one Earth rotation) from May 28-29, 2008. The camera had some focusing issues, but it’s still a great video. Note how the northern hemisphere is tilted toward the Sun in the summer (south is down).

Seeing Earth from space, minus the borders shown on maps, was a transfiguring experience for many astronauts. That Apollo 8 image of a blue and green orb hanging in the blackness of space prompted Buckminster Fuller to coin the term “spaceship Earth” — a reminder that we’re all on this ride together, and it’s the only ride available (until we get to Mars).

Next Week in Sky Lights ⇒ How Astronauts Measure Their Weight

Q&A: How We Know Earth's Mass
Q&A: How Astronauts Measure Their Weight
HOME