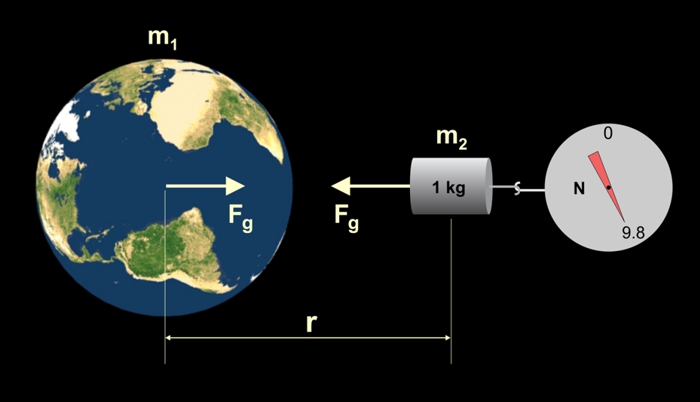 Question: I was watching this science show where they said Earth weighed 6 zettatons. First, what the heck is a zettaton? Second, how can they possibly know what the Earth weighs? I mean, it’s not like they can put it on a scale as you would a sack of apples.  — IN, Cambridge, England

Also worth noting: Astronomers prefer to speak of the mass of astronomical bodies — not their weight. The two terms are used informally as synonyms, but their meanings are very different for scientists. If you want to get the technical explanation, go here. Suffice it to say that “weight” is a force that depends on the strength of gravity (and hence location), whereas “mass” is a constant that measures the amount of matter in a given body. So saying “Earth weighs 6 zetatons” is mixing terminology because the metric ton is a measure of mass.

Scientists use the International System of Units, (aka SI or “metric system”) wherein the base unit of force is newtons (N). The base unit of mass is kilograms (kg), though many variants (gram, milligram, zettagram) are also used. Thus, Earth’s mass is 5.972×024 kg — or if you prefer metric prefixes, 5972 Yg (yottagrams). Non-standard notation must be used for the multiplier since there is currently no metric prefix higher than “yotta.”

In the British Imperial System weight is measured in units of ounces, pounds, and imperial tons, where 1 ton = 2000 pounds. Mass is measured in the obscure unit of slugs, where 1 slug = 14.5939 kg.

So we’ll just use 5.972×024 kg for the mass of the Earth to answer your second question: How do we measure that number? There are two methods possible. The first method, which is more intuitive, is shown in the graphic. We simply measure the weight of an object with known mass (in this case standard kilogram m2). From that we can calculate the value of m1 (in this case the Earth). We’ll use the equation for gravitational force discovered by Sir Isaac Newton:

You can see that finding the mass of the Earth involves solving that equation for m1. Problem was, when Newton first published this equation in 1687 there was no way to measure G (the proportionality constant). Doing so would require measuring the gravitational attraction between two standard masses in the lab, where the force of gravity would be on the order of 10-10 N. Forces that small were well beyond the range of 1687 measuring instruments. It wasn’t until 1798, when Henry Cavendish first measured G using a torsion balance, that calculation of Earth’s mass became possible.

The second (and less intuitive) method for finding the Earth’s mass requires combining Newton’s gravity equation with his equation for centripetal force: Fc = m(4π2R/T2). This allows you to calculate the mass of an orbited body from the parameters of any orbiting body. To find Earth’s mass we can use the Moon (or any artificial satellite). You can see how that calculation works in my Sep 28, 2015 post.

Next Week in Sky Lights ⇒ Images of Earth with Moon