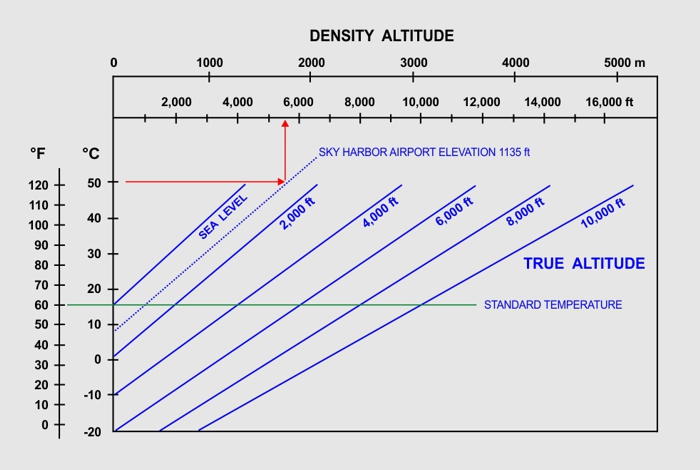 Phoenix, Arizona was suffering through an extreme heat wave on June 26, 1990. The temperature at Sky Harbor airport hit 122 °F (50 °C). When a airline pilot prepares for takeoff there’s an FAA checklist that must be strictly followed and personally signed. One of the items on that checklist is the density altitude — a measure of how easy it is for an aircraft to generate lift.

An America West pilot got a “red flag” on the density altitude. That flight, and others, were grounded until the matter could be resolved. Checklist charts for the Boeing 727 did not show temperatures higher than 120 °F, so there was no way to know if the aircraft could get off the ground before reaching the end of the runway. Total payload (including the weight of fuel) is also factored in.

The lift generated by a wing moving through air depends its size and shape and orientation, on the speed of the aircraft, and (important here) the density of the air around it. Lift is what holds the aircraft up against the downward pull of gravity — if FG > FL you can’t fly. The chart below shows how density decreases with altitude. Not surprisingly, higher altitude airports generally require longer runways. 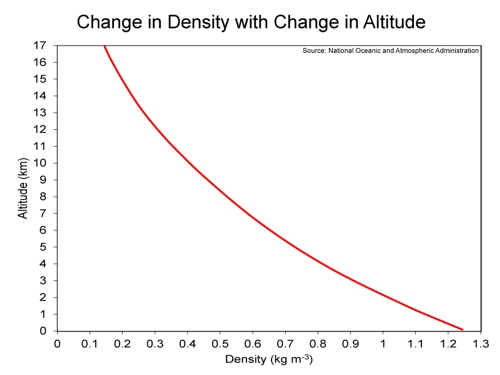 Wings generate less lift when moving through thinner air. The equation for lift is:

where C is a coefficient that’s a function of many minor details, ρ is the density of the air, A is the area of the wing, and v is the airspeed. That means a wing will produce only half the lift at 6000 ft compared to sea level. Further, aircraft engines depend on oxygen for combustion, and produce less power in thinner air. They’re also harder to cool.

The chart at top shows a plot of density altitude vs. true altitude and temperature. The true altitude (aka “pressure altitude”) is your height above sea level. Whatever your altitude, air density is also a function of temperature. This follows from the ideal gas law which says density is inversely proportional to absolute temperature. To demonstrate how to read that chart let’s use the Sky Harbor shut-down as an example.

The airport is at an elevation of 1135 ft. Since the chart only plots every 2000 ft we had to interpolate a line for the airport’s altitude. Next, we draw a horizontal line to the right from the air temperature. Where it intersects the 1135-ft line we project a vertical line upward to read the density altitude under those conditions. You can see it’s about 5500 ft.

So to resolve the problem at Sky Harbor they had to contact the engineers at Boeing, provide the data, wait for a return fax of the calculated results (which was “all systems go”), and amend and sign the FAA paperwork before they could finally take off. These days, computers have virtually eliminated that problem, and delays or cancellations due to extreme heat are rare — at least at major airports. During the Phoenix heat wave last week several regional airports with shorter runways were shut down during the afternoon hours. Sky Harbor airport (with its longer runways) remained fully operational.

The human body operates under similar constraints — summer morning joggers in Phoenix get their workouts when the air temperature is in the low 70s. That only adds about 100 ft to the density altitude. Those who wait till early evening are running in temperatures around 90°, adding 2000 ft, getting less oxygen, and cooling less efficiently. Still, many runners accept that risk. The FJA rarely shuts down jogging paths.

Next Week in Sky Lights ⇒ How We Know Earth’s Mass