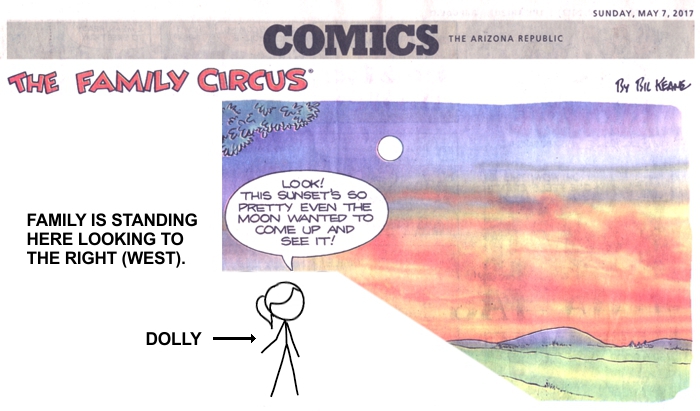 Bill Keane has been doing his Family Circus cartoon for decades and I’ve always enjoyed his work. But on Sunday, May 7, 2017, his knowledge of astronomy was called into question by a cartoon showing a physically impossible scenario. A Full Moon could not be visible at the point in the sky depicted.

FYI, Keane’s cartoons are copyrighted of course. But here’s what the US Copyright Office says about “fair use” …

So I used only the portion of his work needed to make my educational point. Keane is a fellow Arizona resident (I’m pretty sure I taught one of his nephews back in the 90s) and I don’t think he’d object to this partial use of his single-panel cartoon. Thank you sir, for allowing me to create a science lesson from your art.

The cartoon shows the Keane family enjoying a beautiful sunset. Dolly sees the Moon near the setting Sun and makes a cute childlike comment. Here’s the rub: If the Moon was in the position shown, fairly close to the setting Sun, it could not be a Full Moon. It would be seen instead as a Crescent Moon. Take a look at the graphic below: 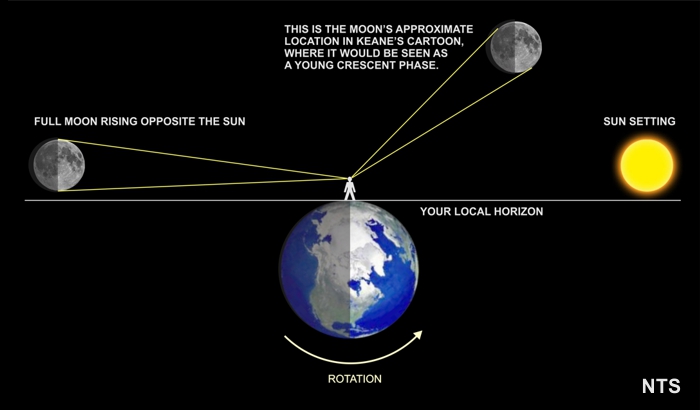 The view is from above the North Pole, where Earth rotates in a counter-clockwise sense. The observer is being carried by Earth’s rotation from the day side of the planet to the night side. The Sun is setting in the west. The Full Moon (if that’s its current phase) would have to be rising in the east. The illuminated side of the Moon (and the Earth) always faces the Sun.

The sharp-eyed reader may well object: The illuminated side of the Full Moon is indeed facing the Sun, but the other Moon and the Earth don’t appear to be illuminated correctly. That’s why the diagram is labeled NTS — not to scale. In reality, at the scale of that diagram, the Sun would be around 10,000 Earth-diameters to the right of where it’s shown. Visualize that and you’ll see why the illuminated sides all face the way they do.

If the Moon were in the position shown in Keane’s cartoon part of the illuminated side would be facing away from us and we’d see what looks like a crescent phase — as delineated by the observer’s sight lines. The Moon would appear similar to the phase shown below: 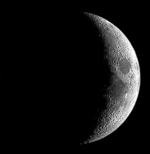 So yes, Keane got the astronomy wrong, but it’s still an entertaining cartoon. If it was up to me, I’d change Dolly’s comment to something more like Calvin would say: “Dad, the Moon and sunset are really pretty, but how can the Moon be Full when it’s only 20° from the Sun?” His answer would no doubt be something “creative” like this.