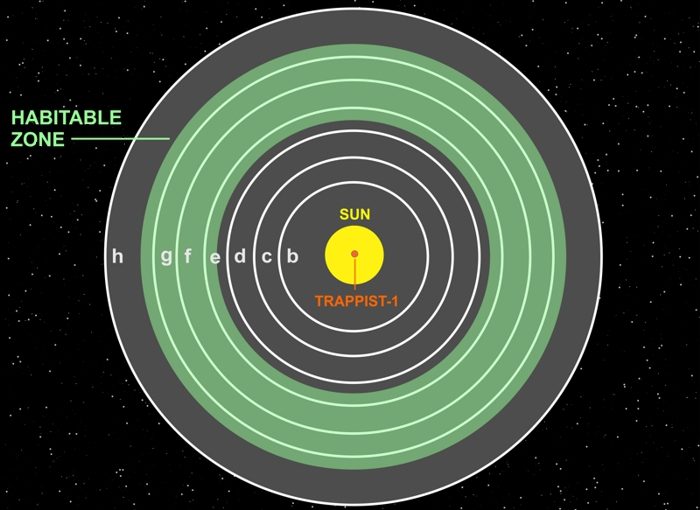 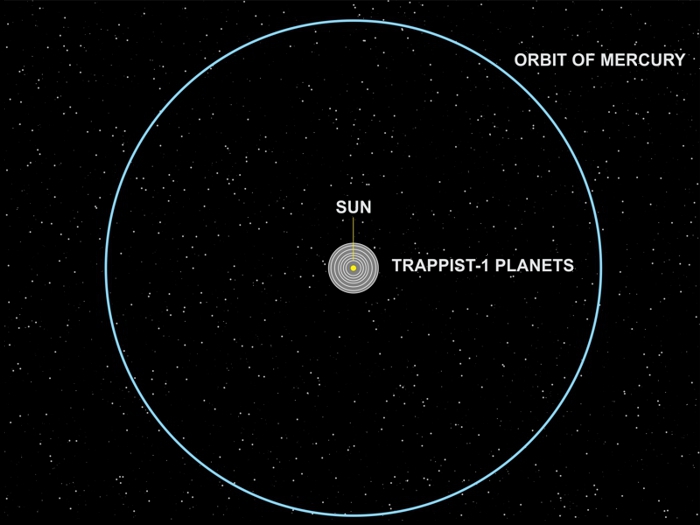 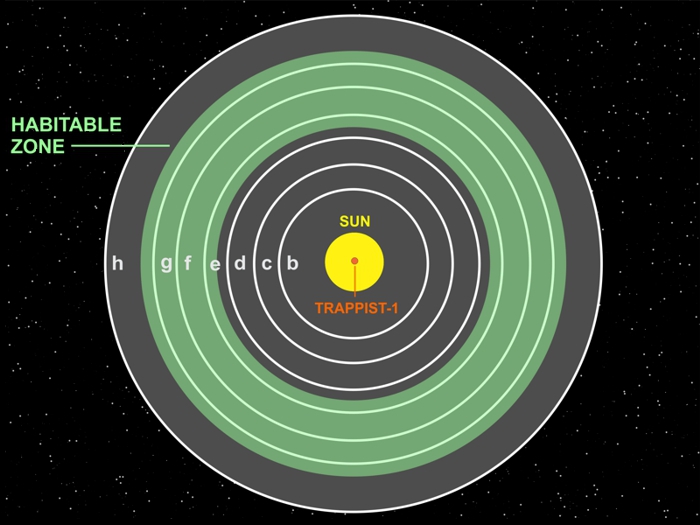 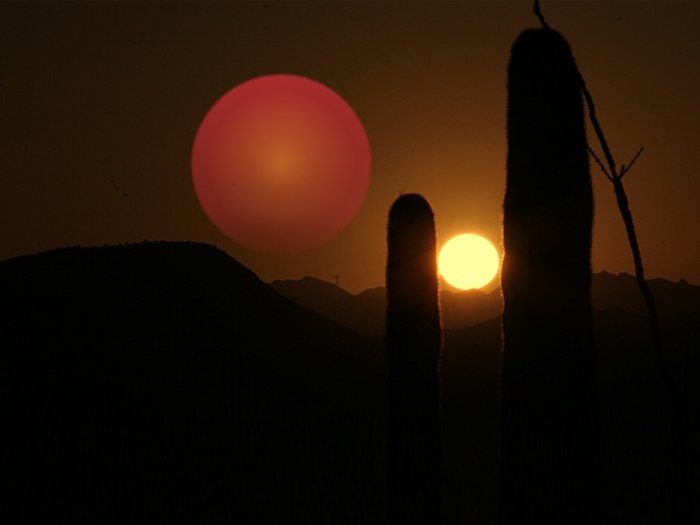 Last week I answered a reader’s question about why we’re looking for life on Mars. If you missed it, you might want to take a look at May 15, 2017: Life on Mars before proceeding.

There was a time when astronomers questioned whether the Sun’s system of planets was unique, or whether systems of planets were common. Thanks to advances in technology, we now know that planetary systems are the norm — at least in our Milky Way galaxy. Some estimates say every star has at least one planet and many have multiple planets. The big question remaining is: How many of these planets are Earth-like and habitable?

Trappist-1 (formal designation 2MASS J23062928-0502285) is a tiny class M8 ultra-cool red dwarf star in Aquarius. It’s 39.5 light years distant, and has a surface temperature of only 2550 K (Sun’s T = 5778 K). It’s also only 11.4% the size of the Sun, so this is a small and (relatively) cool star. At magnitude +18.8 it’s tough to spot even through a telescope. But professional astronomers have been studying it in detail because it appears to have 7 earth-sized planets, with 3 of them inside the habitable zone: the distance from the star at which liquid water could exist.

This slideshow presents three views of the Trappist-1 system comparing it to our own:

Slide 1 shows how the entire Trappist-1 system of 7 planets would easily fit inside the orbit of Mercury. If our Sun was in Trappist-1’s place, the innermost planet would be a mere 2 Sun-radii above its surface. Fortunately, Trappist-1 is much smaller and cooler than the Sun.

Slide 2 shows how the habitable zone includes 3 of those 7 planets. Exoplanets are usually designated only with letters, e.g., Trappist-1h is the farthest planet from its star, and too cold to support life. Trappist-1b,c,d are the closest, and too hot to support life. Trappist-1e,f,g are in the “Goldilocks Zone” where temperatures could allow the presence of liquid water (considered essential for life as we understand it).

Slide 3 shows what a sunset might look like from Trappist-1f. Red dwarf stars give off most of their energy as invisible infrared heat radiation, so you could see the star only dimly in the sky. But you would feel it’s heat, much like that from the coals of a dying campfire. This slide is a photo of an Arizona sunset with Trappist-1 added digitally. Trappist-1 is smaller than the Sun, but Trappist-1f orbits so close that it’s star would appear (as shown) 3X larger than the Sun appears to us. And even at noon, the sky on Trappist-1f would appear as dark as that in the slide. Not saying there’s any saguaro cactus on Trappist-1f, but they provide a nice sense of scale.

There’s been 3486 exoplanets discovered to date. Note: that link updates regularly, so the number may be higher by the time you read this. The majority of those planets are gas giants, ranging in size from larger than Jupiter to smaller than Neptune. What makes the Trappist-1 discovery interesting is that all 7 of its (known) planets are terrestrial in size and composition — they’re rocky solid worlds like Earth and Mars. Whether they have atmospheres remains to be seen.

Astronomers only recently developed the methods by which such tiny exoplanets can be found. Previously, the bias had been “larger exoplanets = easier-to-discover exoplanets” and that skewed the data. Many now think the ratio of terrestrial exoplanets to gas giant exoplanets will continue to increase. And of course, that bodes well for answering the really big question: Are we alone in the Universe?

But habitable ≠ aliens. Many scientists believe that, given the right conditions, the emergence of life is as automatic as a chemical reaction. Known extremophiles present strong evidence for that. The puzzle is: Given a form of life, how many of them evolve to the point where they can build telescopes, communicate by radio wave or laser, and ask the same questions that we ask? Lacking detection of a signal, or other indirect signs of a technological civilization, all we can do is guess. And most guess it to be rare. All we can do to really answer that question is look, and hope, for such a signal. And that’s the whole point of SETI.