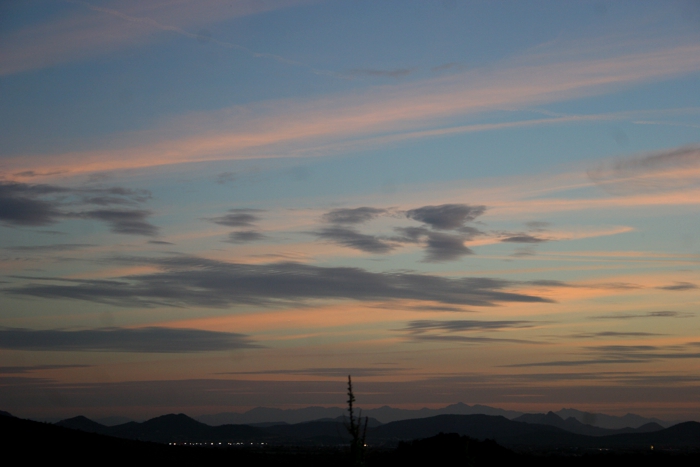 Question: I saw these two clouds earlier today and they were virtually copies of each other. Wish I could have snagged a photo but my camera is broke. The twin clouds didn’t last that long before they got all mixed up again. So here’s my question … I thought clouds were random, like snowflakes, and you’d never see two alike. Well I just saw two identical clouds. How can that be? — CO, Hilo, Hawaii

Answer: Too bad about your camera. I enjoy getting photos from readers. And it would make an explanation much easier to come by. That said, I have an idea what you might have seen. This type of cloud goes by the taxonomic name of Altostratus Opacus Duplicatus. And I didn’t even know I had a photo of one until I did some research. The images in this post were captured several years ago when I noticed an unusual cloud formation in the sky.

There were two parallel trains of clouds with what seemed to be “synchronized” pairs — three such pairs are visible in the top image. Maybe a fourth. I watch clouds all the time and had never seen that, so I took photos. Like what you saw, it didn’t last that long. The image below was taken 5 minutes after the first. 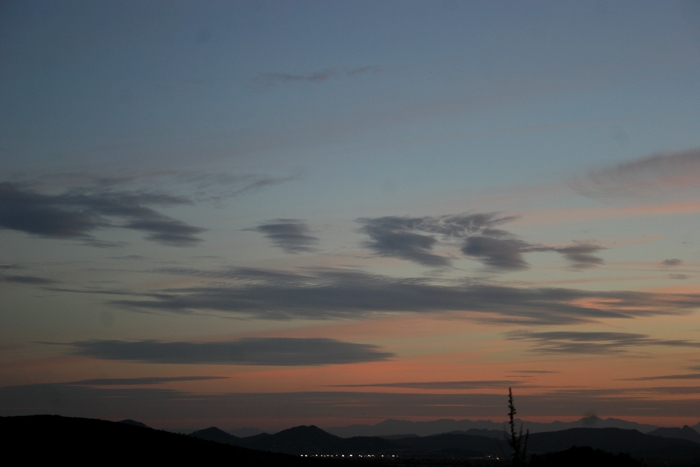 Here’s the link to the World Meteorological Organization publication that explains the taxonomy of clouds from which I discovered that tongue-twisting name (page 44). And here’s what they say about Altostratus Duplicatus:

The “Opacus” part of the full taxonomy refers to the fact that these clouds were opaque and not transparent. And the “Altostratus” is simply a generic category alluding to their altitude, typically 2-7 km (6500-23,000 ft). They are formed in narrow altitude layers and are usually (but not in this case) continuous over large areas of the sky.

As physicist Richard Feynman famously observed: Just because you have a name for something doesn’t mean you understand it. To be honest, I was well aware of the basic taxonomy of clouds but had no idea the nomenclature went that deep. Until I did the research, I’d never heard the terms “opacus” or “duplicatus.”

What gives rise to the Duplicatus species is more than just random chance. Sure, clouds are “random” like snowflakes but they’re still subject to the laws of physics. Coincidences do occur with random phenomena (like multiple winning lottery numbers), but there’s something else at work here. Altostratus clouds occur in what are called laminar regions of the atmosphere — air movement is smooth and uniform. So multiple instances of (nearly) identical structures should not be that surprising. Consider how successive waves on a body of water look similar. That’s why you get the Duplicatus.

Thanks for an excellent question CO. Looks like we both learned something from it.

Next Week in Sky Lights ⇒ Life on Mars