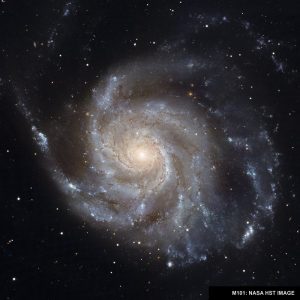 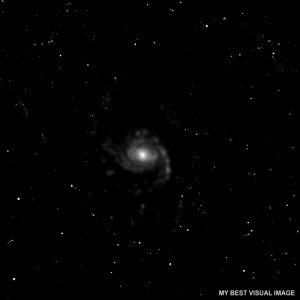 If you missed Part 1 of this two-part series, check it out before proceeding. We now fast forward 3 months.

The club was assembled on a plateau near the Orme-Dugas Exit off I-17, about 50 miles north of Phoenix and (at that time) with very dark skies. The elevation was 1500 m (5000 ft). It was a moonless night and the skies were clear. My 17″ Dobsonian was set up, M101 was in the field of view, and we had four observers ready.

Our target is shown above. Compare the two images (click to enlarge). On the left is a Hubble Space  Telescope view of M101. On the right is a “doctored” image showing about what my “best view” looked like with the Dobsonian. If I could see two spiral arms it was a good night. I knew there was so much more to see, hence the experiment with retinal hyper-oxygenation (RHO).

RHO might sound complicated but it’s fairly easy these days. You’ll need to obtain a bottle of supplemental oxygen (O2). When we ran this experiment, I had to obtain the oxygen from a chemical supply company. They required proof of employment as a science teacher at an accredited institution. It arrived in a small “scuba style” container with a regulator valve at the top, and was refillable. Cost us about $80 from the club treasury.

Today, online, you can get a small disposable cylinder for about $10 (here’s one of many vendors). The 4 oz size holds “50 inhalations” of 95% pure oxygen. Beyond its obvious medical applications, supplemental oxygen is most often used by athletes and mountain climbers. It’s also becoming popular at “oxygen bars” in polluted metro areas. Since the retina is fed directly by an artery, extra oxygen in the blood quickly reaches it.

One would expect little or no effect from RHO under normal, sea-level, average barometric pressure conditions. But at altitude, or in a situation where the human body receives less than its design specs of O2 (such as badly polluted city air) a noticeable improvement in sensitivity might be seen. At least that was my hypothesis. We could have gone higher in elevation but I felt 1500 m was worth a try.

Disclaimer: 95% O2 in this quantity is pretty benign. After all, we breathe 21% oxygen from the atmosphere all the time. Obviously, you don’t want any flames or coals around, and the oxygen from these containers can be cool and dry and slightly irritate the throat and lungs (if overdone). And the oxygen can make you a bit light-headed, again, more so if overdone. So if you have any medical conditions, best to check with your doctor before trying RHO.

We ran the experiment, with each observer taking their turn at the eyepiece. The participants were all amateur astronomers with good observation skills. There was plenty of O2 to go around. The number of inhalations per viewing ranged from 1–5. The results were suggestive but inconclusive. Here’s some of their comments:

“I was surprised at the rapid onset of the effect, about 15 seconds, then it got about a half-magnitude brighter.” [Mike Fuller]
“Wow! There really is a noticeable difference. I could easily believe one magnitude.” [Terri Renner]
“Oh yeah, I can see it. Hard to tell how many magnitudes though … still kinda’ faint.” [Jonathan Wolfe]
“The effect is subtle but definitely there. I’d compare it to a sharpening filter’s effect on a digital image, sorta helping to define the object’s edges. Hard to tell how much brighter, maybe half a magnitude.” [Dan Heim]

Subjective impressions of brightness without the use of double-blind test procedures are always suspect, yet this objection must be tempered by the participants’ observing experience. Magnitude differences of 0.5 (e.g., Altair vs. Rigel) are easily discerned by a trained eye.

On the other hand, a 0.5 magnitude change in brightness is likely within the range of the placebo effect. I’ve since learned more about the chemistry of blood/eye/brain. Experts say that, despite their near universal use in professional sports, any effect felt is illusory. You can only put so much oxygen into the blood before it reaches saturation. And in an otherwise healthy individual the oxygen is already near saturation, except at extreme altitudes or in atypical environmental conditions (like a building fire or a methane emitting swamp).

As Summer approaches, M101, is again approaching best visibility. I’ve since sold my 17″ reflector, and now use a 5″ refractor. M101 doesn’t look like much at that aperture. But I might give this experiment another run. The cost of oxygen has dropped, and it’s easily available online. I’ll report back on my results in a future post.

Next Week in Sky Lights ⇒ Stonehenge in Colorado