The title of this post might sound like an affliction. Rather, it’s a proposed solution to the affliction suffered by many astronomers. Allow me to explain what is commonly called aperture fever. Quite simply: Whatever the size of the telescope you own, once you’ve observed through a larger one, you want more aperture.

The term aperture refers to the size (usually the cross-sectional diameter) of the light gathering opening of the telescope. It relates directly to the amount of light that ultimately arrives at your eye. Larger apertures gather more light according to the square of the aperture: An 8″ aperture scope gathers (8/6)2 = 1.78 = 78% more light then a 6″ aperture scope. The more light you get, the brighter objects appear, and the fainter the objects you can see.

Quick fact about telescopes explained in more depth in my April 8, 2013 post: Some telescopes are designed to make small things look larger, and some are designed to make faint things look brighter. There are models that attempt to do both, but it’s always a compromise. It all comes down to what the observer likes to observe. I like to observe faint targets, like galaxies, nebulae, comets, and distant star clusters. That why I made the transitions from 2.25″ to 6″ to 8″ to 17″ for my first four telescopes. Click on the thumbnail below to see the largest of these: 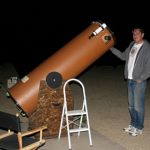 That’s a Newtonian reflector optical design on an alt-azimuth (Dobsonian) mount. It doesn’t “track” like the newer computerized scopes — you have to know how to find your target using software or printed charts. And without tracking, it’s difficult to photograph anything but the brightest objects. This telescope is optimized for visual observing, and the views it’s provided have been spectacular. But aperture doesn’t come cheap … about $50/inch for reflectors to upwards of $300/inch for refractors. Of course, not long after purchasing this scope I had the chance to observe through a 30″ reflector owned by a friend up in Sedona. So of course, I wanted more aperture.

And now I must briefly digress to relate a story about eyes, brains, and oxygen. I traveled to Hawaii to photograph Halley’s Comet in 1986. While on the Big Island I had the opportunity for a guided tour of the astronomy complex at the top of Mauna Kea (elevation 4205 m = 13,800 ft). I asked my guide, a professional astronomer, if the altitude was ever a problem. He said yes, explaining the difficulty of physical labor, sleeping, even critical thinking — a result of reduced oxygen levels in the body. As an example of the affect on cognition, he told me about how he was once fabricating a mechanical part in the machine shop. When he went to install it it was 10 mm short. So he returned to the machine shop and removed another 10 mm [embarrassed laugh].

He also pointed out how the lack of oxygen also makes the eye’s retina less sensitive to light. That’s not so much a problem for the professionals, since they do most of their “observing” through instruments and digital displays. But, he said, amateurs who bring their scopes to these high altitudes definitely report that effect.

And thus was hatched the idea for an experiment: retinal hyper-oxygenation (RHO). If reduced oxygen de-sensitizes the retina, would excess oxygen over-sensitize it? I asked around, and nobody in my astronomy crowd had ever heard of trying that. They all knew the usual tricks of the trade to improve visual sensitivity, including:

*Binocular vision, it is claimed, allows (tricks?) the eye-brain system into seeing more details than would a single eye acting alone. Some observers swear by it, but it’s a pretty subjective effect.

So yes, I knew all those observing techniques. But when I observed one of my favorite targets, M101 aka The Whirlpool Galaxy, I was always disappointed. I discussed the idea for an RHO experiment with club members and they were all interested. “M101 with RHO” was added to our observing schedule. Next week the results …