Question: I’ve been hearing a lot about this rocket called the Falcon 9 that can take off and land vertically. What’s the big deal with that? Isn’t that the way it’s always been done? — WVB, White Sands, NM

Answer: If you base your assessment on classic science fiction, sure. Sci-fi is replete with images similar to the one below. Vertical take-off and vertical landing (VTVL) is obviously embodied in the ship’s structure. In fact, VTVL is required on an airless world. That’s how Apollo 11 astronauts conquered the Moon back in 1969. 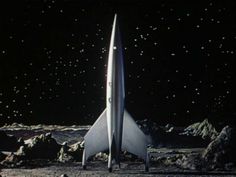 Before continuing, we need to distinguish between VTVL and VTOL. Technically, they’re both acronyms for the same words, but in the past VTOL has been applied to everything from the Bell Boeing V-22 Osprey to helicopters to drones to hot air balloons. SpaceX prefers to use the acronym VTVL to describe the capabilities of its Falcon 9 rocket, just to set it apart from other VTOL craft. The video at top shows a launch of their Falcon 9 from Cape Canaveral on December 22, 2015. As you can see, it performed flawlessly. There have been subsequent launches (the most recent on February 12, 2017) but this video shows the VTVL details. If you want the technical specs on Falcon 9, here’s a good summary from Wikipedia.

The big deal with VTVL is that you get to reuse a large and expensive part of the spacecraft — the booster. This significantly reduces the cost of sending things into space. SpaceX estimates that reusing the first stage will drop the cost of a launch from $61.2 million to $42.8 million. Plus, they’re not jettisoning debris into the ocean (or into orbit).

By comparison, the Space Shuttle (STS) was a reusable payload that landed horizontally on a runway. The STS could only launch from Cape Canaveral, so depending where it landed, it sometimes had to be transported cross-country after a mission. It’s two solid-fueled boosters parachuted into the ocean for later recovery, and its main liquid fuel tank was jettisoned for breakup in the atmosphere. VTVL is vastly simpler logistically.

Other aspects of VTVL like hovering, transitioning to horizontal flight, and the ability to land on any level surface (all essential for drones and helicopters) are less important for Falcon 9.

SpaceX has lost a few Falcon 9s, but the technology is now sufficiently reliable for commercialization. Two of the trickiest engineering problems were the landing struts that support the craft vertically, and the guidance system that brings it in level at the predetermined landing site. The video below shows an earlier test of these systems at the SpaceX launch facility in Texas.

If you want to learn more about Grasshopper go here. This rocket was never designed to carry a commercial payload into orbit. It was a “proof of concept” stage in SpaceX’s R&D process. Several VTVL systems were proposed earlier by others, but none of them reached the stage of development demonstrated by Falcon 9.

And here’s one more thing about VTVL: Right now the cost of sending something into low Earth orbit ranges from about $3000 – $13,000 per kilogram, depending on the launch system. For an 80 kg adult human that’s a ticket price of $240,000 – $1,040,000 (not including baggage). Opening the final frontier, as with any frontier, ultimately comes down to economics. We know how to do it, and there’s any number of people and corporations willing to do it. What SpaceX provides with their Falcon 9 is the astronautical equivalent of the covered wagon. It will do for space exploration what the Conestoga did for the American West.