Question: Well it just happened again. We had nice sunny weather all week, then it rained the whole weekend. And now they say on Monday it’s gonna be sunny again. It sure seems like it rains more on weekends than during the work week. Is there some scientific explanation for that, or is it just bad luck? — JD, Seattle, WA

Answer:  Washington state gets a lot more rain, on average, than my home state of Arizona, so there will be some regional differences that affect your perception of how often it rains on any day. But I hear what you’re saying. In fact, I’ve heard many people make that same complaint. Do a search for “does it rain more often on the weekends” and you’ll get over 2 million hits. There’s nothing quite like getting up Thursday morning, checking the 5-day forecast, and seeing something like the (admittedly fabricated) graphic at top.

One would expect, over the long term, that how often it rains on any given day would not depend on the day of the week. I mean, Mother Nature doesn’t care what day it is. The 7-day week is a human invention, as I discussed in my Oct 24, 2016 post.

So in 1998, scientists at Arizona State University in Phoenix analyzed weather records dating back to the 1940s. What they found was a disproportionate amount of rain over the weekends compared to Monday-Friday. The historical variation was a surprising 20%. But that was only near major metropolitan areas like Phoenix. The data for locations out in the middle of an ocean, or in rural areas far from cities, showed no significant variation.

From a scientist’s point of view, a 20% variation seen over a 50+ year period is statistically significant, and most likely had a cause other than random chance. Some type of cause and effect must be operating. The ASU team’s hypothesis (now generally accepted) was that the cause was something called aerosols.

Aerosols are microscopic particles of gas, liquid, and dust. They are given off by operating factories, transportation systems (including cars), power plants, and pretty much any device that uses fossil fuels. Aerosols act as nucleation points for rain droplets to form. Water molecules (H2O) in their vapor state are electrostatically attracted to these aerosols. When enough water molecules accumulate, a liquid droplet forms (temperature and humidity permitting). That’s how “cloud seeding” works, but in that case the aerosols are tiny particles of silver iodide (AgI) or other hydrophilic chemicals intentionally distributed into the air.

Conclusion: Aerosols from human activity are higher during the work week. They can build up in the air around large metro areas. By the time the weekend arrives the concentration is high enough to affect the chance of precipitation. Over the weekend, with less aerosols being generated, and existing aerosols being “rained out,” the air returns to its normal state. And on Monday, sunny weather returns.

Ironically, after I spent about 30 minutes fabricating the forecast at top using available NOAA icons, Mother Nature provided the real thing. The Phoenix metro area currently extends to about 10 miles south of my home, so we are often affected by its weather. Click on the thumbnail below to see our actual forecast for the weekend: 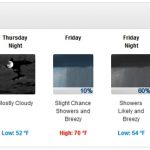 Of course, it doesn’t always rain on the weekends, as my title suggests. But it turns out there’s a scientific explanation for why it rains more often on weekends. At least near major metropolitan areas.