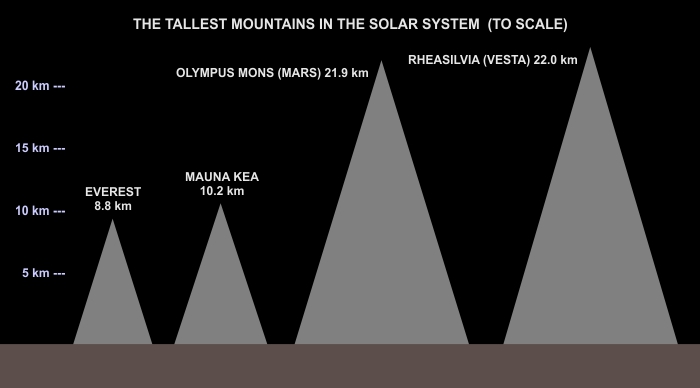 Question: I recently learned that there were taller mountains on Mars than on Earth. But Mars is a smaller planet than Earth, so how can that be? I’d expect that larger planets would have larger mountains. — EH, London, UK

Answer: The record for “tallest mountain in the Solar System” actually goes to Rheasilvia, a rebound peak in a crater on the asteroid Vesta. Look at the to-scale comparison in the above graphic (the shapes are idealized for simplicity). And amazingly, Vesta is only 525 km in diameter (compared to Mars at 6800 km).

We can resolve this apparent contradiction with a little physics about the mountain-building process. Mountains are very heavy objects and their weight must be supported by bedrock. For example, Mt. Everest has an estimated mass of 1.6 × 1011 kg (357 trillion pounds). But on Mars, where gravity is only about a third as strong as on Earth, Everest would weigh “only” 135 trillion pounds. If you’re confused about “mass” vs. “weight” go here. But be sure to come back for the rest of the story.

There are three ways to form mountains:

Interestingly, if you allow for the fact that Mauna Kea starts 6 km below sea level, it’s actually taller than Everest. Heights in the graphic are shown relative to the average solid diameter of each world.

Regardless of their origin or location, there’s a limit to how high you can build a mountain made out of rock. Once you get to a certain height, the weight of the rock above will “liquefy” the rock at the bottom causing it to flow like a thick mud preventing any further increase in height.

Now a given type of rock, say granite, has the same crushing resistance wherever it is in the Solar System. It’s strength is a function of its crystalline structure. But how much a given pile of rock weighs depends on both how much rock you have, and the strength of gravity. Gravity on Mars is 38% of that on Earth, and on Vesta it’s a mere 2.5%.

Let’s run a thought experiment to illustrate this concept: If you started stacking standard bricks on top of each other, how high could you go before the weight of the stack would crush the brick at the bottom?

Architectural note: In practice, brick buildings standardized at around 4 stories simply because of the labor involved in climbing stairs (this was before the invention of the elevator). That’s only 40-50 feet — about a hundredth of what is possible. Practically speaking, lateral loads from wind or seismic activity are the limiting factor. Brick is not that strong under bending and shear forces. The tallest all-brick building is Philadelphia City Hall at 548 feet (166 m), but it required walls 22 feet (6.7 m) thick at the base to support the load. Of course, the incorporation of structural steel is what later allowed skyscrapers to far exceed these limits.

The point is: You can only stack physical materials so high before they self-destruct from their own weight. And this is why Mars and Vesta have taller mountains than Earth. Mountains just weigh less on those worlds.

It’s also interesting to compare the size of the mountain to the size of the world. Whereas Earth and Mars are roughly spherical, Vesta is flattened by a factor of 0.22. That complicates the definition of “mountain” since Vesta and other oblate bodies really have two defined diameters. Still, side-by-side, Rheasilvia tops Olympus Mons by 100 meters.

Next Week in Sky Lights ⇒ Venus in December 2016