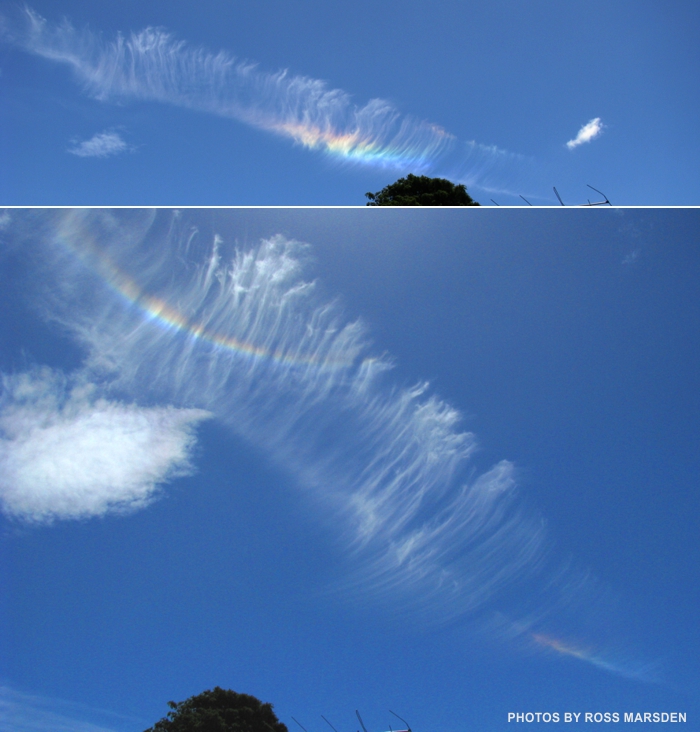 I was contacted recently by Ross Marsden, a meteorologist at MetService (the Meteorological Service of New Zealand. He had seen the photo in my April 30 2012 post and observed that it was a circumhorizontal arc — not an iridescent cloud as I had identified it. He sent me the two images above as examples of a circumhorizontal arc. I thank him for his feedback, and for his permission to publish those photos. I have several meteorologists subscribed to Sky Lights and have learned from their comments on more than one occasion.

If you follow those last two links, you’ll see that both phenomena involve rainbow-like colors and both are seen in clouds, but the similarity ends there. Rainbows can be seen in a “clear” sky (albeit one with water droplets suspended or falling in it), and rainbows are always opposite the Sun in the sky. But circumhorizontal arcs and iridescent clouds are seen within clouds. Both phenomena are commonly called “fire clouds” but have nothing to do with fire. 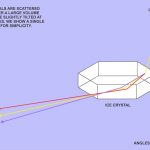 By comparison, iridescent clouds are produced by microscopic water droplets (or tiny irregular ice crystals) suspended in the clouds, and the colors are produced by diffraction and interference. Hence, there is no fixed pattern to the colors produced. Further, iridescent clouds are closer to the Sun in the sky — usually less than 46°. They are often not visible unless the bright Sun is blocked by a cloud or structure.

Marsden also points out that, since the effect requires ice crystals in (usually) cirrus clouds, the full 360° arc is rarely seen. Rather, the arc can be fragmented around the sky. This is what was happening in the photo in my April 30 2012 post, which I mistakenly identified as an iridescent cloud. I have now added a note to that post correcting my identification and linking back to here.

Q&A: Why the ISS Orbit Appears Curved
Q&A: Why Mars has Taller Mountains than Earth
HOME