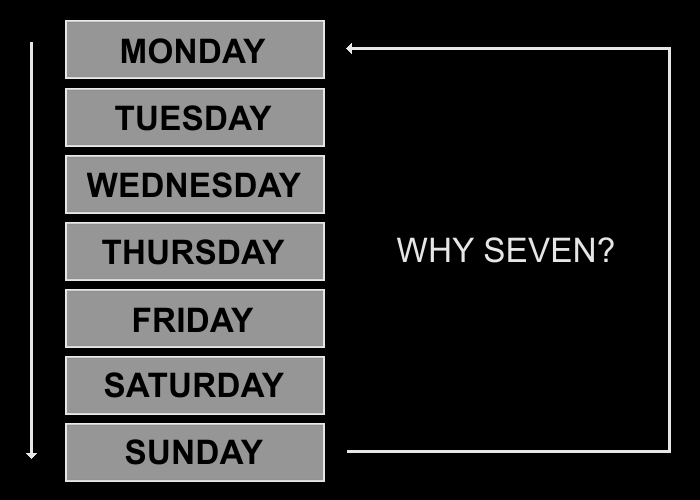 Question: I was just curious, so I asked my teacher why the week has seven days. He didn’t have a clue, but said he’d give me extra credit if I found the answer and wrote a report about it. So I checked Wikipedia first, but it wasn’t much help. Then I discovered your blog and see that you answer questions from readers, so I’m asking. Why are there seven days in a week? I could really use this extra credit. Thanks! — CM, Flagstaff, AZ

Answer: There’s no definitive answer to your question. Several explanations have been proposed. Much of what I know comes from the book The Discoverers by Daniel J. Boorstin. Most of what you find online about “days of the week” has to do with how the days got their names, and that doesn’t answer your question.

Historically, different cultures around the world have used cycles of anywhere from 5-10 days per week. Each used their own choice of day names. The details of the systems varied, but in all cases the need for some type of system was driven by the natural human desire to subdivide measurable quantities for convenience and precision. For a brief period in France, after the Revolution, they tried a 10-day week mirroring their new metric system.

Consider any unit of measurement you’re familiar with. Having fractions of that unit, each with its own name and symbol, makes the process of measurement easier (kg, g, mg, μg). The same idea applies to measurements of time (year, month, week, day). The year, month, and day are all based on astronomical cycles, but the week is an arbitrary unit. Modern society has settled on seven days per week, and that choice appears to goes back to ancient Rome. But why seven?

There are several theories about this, and historians of science disagree, but here’s the top two contenders:

So I don’t really have a definite answer to your question CM, sorry. It’s just one of those things that goes too far back in history to know for sure. Unlike the year, month, and day, the 7-day week was an arbitrary choice adopted by many ancient cultures — some as early as the 6th century BC.