Question: I heard that Juno just reached Jupiter and will be sending back some amazing images. Could you ever see Juno orbiting Jupiter through a scope?  Just wondering, since Jupiter is so prominent in the evening sky. — SS, New River, AZ

Answer: No way even HST could see Juno. Jupiter might be big and bright and close, but spacecraft are too small to resolve in even the best telescopes. If the ISS were in orbit around Jupiter, you just might be able to spot it. Let’s do the math …

The graphic above shows the geometry for determining apparent angular diameter — how large something appears in your view as measured in degrees. [The “apparent” is sometimes dropped.] We can’t use “km” or “miles” because we’re only talking about an object’s apparent size in the sky. And the sky is a 360° x 180° hemisphere.

To calculate the angular size of an object we use this formula, based on the right triangles in the graphic:

So let’s run the numbers for Juno and the ISS in orbit around Jupiter. The distance from Earth to Jupiter is now about 8.8×108 km. Juno is 21 m in diameter (including the unfurled solar panels). The ISS is 109 m along its largest axis. This translates to angular sizes of 2.7×10-6 degrees (0.01 arcseconds) and 1.4×10-5 degrees (0.05 arcseconds) respectively. That’s pretty small. Jupiter’s angular diameter is currently around 50 arcseconds.

If you want to see an object with a telescope, the angular resolution of the scope must be comparable to the angular size of the object. The Hubble Space Telescope (HST) has an angular resolution of 0.05 arcseconds, so the ISS in orbit around Jupiter would just be visible. But it would only be a single pixel, like this image of Earth taken by the Curiosity Rover on Mars. Click to enlarge. 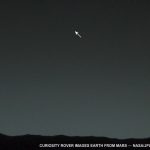 If the sunlight was reflecting perfectly off the ISS solar panels, the light might smear into adjacent pixels, but it wouldn’t be much of an image. For Juno, at 1/5 that angular size, the spacecraft would be lost in the background noise. Adaptive optics telescopes on the ground are pushing into the 0.03 arcsecond range, and are sure to improve further. But imaging Juno is not within the capabilities of current technology.