This is a special report from Arizona that preempts my previously scheduled Sky Lights. You’ll have to wait another week to learn why we call the Moon “the Moon.” I don’t do this often — last time was for the Chelyabinsk meteor impact in February 2013. The Arizona fireball deserves similar coverage. The video is provided by the American Meteor Society (AMS) and includes contributions from around the southwestern US. My apologies for the popup ads, but my thanks to AMS for allowing the embed.

At 03:57 am MST on June 2nd, a large fireball lit up the skies over the southwest. It was seen from California to Texas, and from Colorado to Mexico. It was heard in many eastern Arizona locations and rattled some windows. People were awakened by the bright light outside. I’m not usually up at that early hour, so I missed it. But here’s what I know so far.

Click on the thumbnail below to see the meteor’s approximate trajectory. It exploded over the Tonto National Forest east of Payson, Arizona. Doppler radar indicates that debris from the explosion likely reached the ground. Meteorite hunters are already looking for fragments. Debris fields are typically elliptical patterns, but what I show is just an estimate based on the trajectory. It’s uncertain at present if the object was related to any of the annual meteor showers — it may well have been a maverick from the asteroid belt. 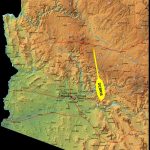 That trajectory was reconstructed using multiple videos of the fireball. Videos can be combined geometrically to show the object’s 3D path through the atmosphere. Of course, the more videos you have, the more accurate the result. But what we have now is “close enough” for meteorite hunters. They’re already combing the area for fragments. Meteor fragments (technically called meteorites) can fetch anywhere from 50¢/gram to $50/gram, depending on composition.

The Tonto National Forest is government land, so you might wonder who actually owns those meteorites. By law, meteorite hunters can claim and sell anything they find on the ground — if they have the proper permit. But they are not allowed to dig for samples. That’s probably because what they’ll find on the surface are the smaller (less valuable) pieces. Anything that could punch into the ground would be larger and more valuable. The government usually donates those to a university. Many universities maintain meteorite collections — Arizona State University has the largest collection on the planet.

So Earth dodged a bullet again, reminding us that outer space is a shooting gallery. NASA is watching for objects like this with their Near Earth Object (NEA) program. Unfortunately, the NEA can only detect objects on the order of 150 meters or larger, so this one surprised us. Had it exploded over Phoenix, as happened in Chelyabinsk, many windows would have been shattered by the shock wave. There could also have been some damage from falling debris. Luckily, it exploded over a sparsely populated area of the state.

Next Week in Sky Lights ⇒ The Formal Name of Our Moon

Cloudzilla
Q&A: The Formal Name of Our Moon