Question: I live in Michigan, not far from the east shore of Lake Michigan. We’ve been having a lot of what the weatherman calls “lake effect snow” and I think I understand what causes it. What I’m curious about though, is if the size of the lake matters? Does this only happen for a “Great” lake, or can it happen with smaller lakes also? — MD, Holland, MI

Answer: For those not familiar with the term, let me first explain what qualifies as “lake effect snow” (LES). This type of snow often occurs when cold air blows over warm water. Click on the thumbnail below to see NOAA’s LES graphic. 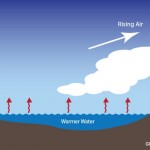 The cause of LES is explained by thermodynamics. Water holds its heat much better than air: The specific heat of water is 4.184 J/g°C (joules per gram-degree Celsius). What that means is: You need 4.184 J of energy to change the temperature of 1 g of water by 1 °C. By comparison, the specific heat of air is only 1.020 J/g°C (depending on its temperature, pressure, and humidity).

So in compliance with the laws of thermodynamics, when cold air comes in contact with warm water, the air will absorb heat (as well as rising water vapor). The water adds some weight, but more importantly, the heat causes the air to expand. That lowers its density and (like a hot air balloon) causes it to rise. As the air rises, it expands, and its temperature drops via adiabatic cooling. When the air temperature reaches the dew point, visible clouds will form.

What happens next is based on how much water those clouds hold, and just how cold it gets. You could have only clouds, as shown in my photo at the top. Those clouds are forming just after sunset, as the air is cooling and the warmer waters of Lake Pleasant (just beyond that mountain range) are still evaporating. We didn’t get any precipitation from those clouds. Under more extreme conditions, lake effect clouds can generate rain, snow, or hail.

That said, we can now address your question about the size of lake required for LES. As a general rule, the larger the lake, the more heat it holds, and the longer the fetch (distance over which wind is in contact with water). The longer the fetch, the more heat and water vapor will be transferred. No surprise the Great Lakes are responsible for most LES headlines.

At the latitude of the Great Lakes, prevailing winds blow from west to east. Buffalo, NY has some of the largest snowfalls in the US, most due to lake effect. They got 27″ overnight in October 2014. But then, Buffalo is downwind from four of the five Great Lakes, and on the east shore of Lake Erie.

When you get to even smaller lakes, the shorter fetch requires more extreme temperatures to produce LES. At the limit, a strong gust of wind could blow water from a puddle into the air, and that water could freeze before it hits the ground. Technically, that would be LES. I’m reminded of this viral YouTube video.

Next Week in Sky Lights ⇒ Speed of Light vs. Speed of Sound

Q&A: Why the Equinox Isn't
Q&A: Speed of Sound vs. Speed of Light