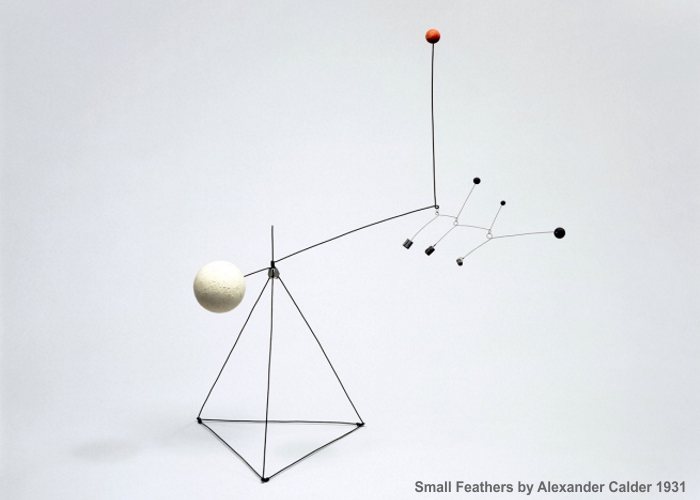 The broad fields of science and art are often considered disparate, mutually exclusive, and hardly complementary. That’s a short-sighted view I’ll try to dispel today. This is a little off-topic for Sky Lights, but ultimately suggests a strategy for drawing the interest of non-scientists to science. And Sky Lights is always about education.

The image above is a classic example. It’s a mobile by Alexander Calder, and combines the science of mechanics with the art of sculpture. I had the privilege of seeing some of Calder’s work in a visiting exhibit at the Milwaukee Museum of Art in the late 1960s. Calder did dozens of these pieces.

Mobiles are fascinating to watch. The centers of mass of all suspended objects are precisely balanced. Even in a closed room, natural air currents set a mobile into motion. The appearance changes in a choreographed display of kinetic art.

Other sciences and arts have been combined. The science isn’t always as obvious as with mobiles, but it’s there:

I could go on but I think you see my point. So I’d like to take this opportunity to promote another example I’m personally supporting: the synthesis of astronomy and dance. It’s called Song of the Stars. This will be a one-time performance by Seven Dance Company at the Capital Theater in Columbus, Ohio, currently scheduled for April 21, 2016. Please consider contributing to Song of the Stars. Seven Dance Company is a 501(c)(3). Their Kickstarter campaign runs till April 11 at:

The funding they seek will pay for the production of a feature film for world-wide distribution by filmmaker Kai Staats of Over the Sun, and for a 360 degree film to provide an immersive presentation in planetariums and an interactive experience in VR headsets. This represents a quantum leap forward in STEAM, a new approach to education.

By combining the science (and art) of videography with the arts of dance and music, they hope to leverage the emerging technology of virtual reality (VR). The film will appeal to the non-scientist, yet engage them in science. During the video, astrophysicist Paul Sutter (see his podcast Ask a Spaceman!) will provide narration for the performance explaining how each movement represents a stage in the birth, evolution, and death of a star.

VR is poised to become the “next big thing” in consumer technology. It will impact entertainment, education, gaming, telepresence, remote surgery, data visualization, and other areas yet to be imagined. Good VR headsets currently run US $600-800, but prices will drop over time. At present, the industry is in a Catch-22 situation with not enough VR content to drive sales, and not enough sales to drive VR content production.

Song of the Stars is a step forward on this front as well. But mostly, it’s a work of science and art that deserves to be preserved and shared. This post is the closest thing to an ad you’ll ever see in Sky Lights. Still, having a blog like this provides an opportunity to promote what I support (like the fight against light pollution). And I support Song of the Stars.

Next Week in Sky Lights ⇒ Why the Equinox Isn’t

What LIGO Detected
Q&A: Why the Equinox Isn't
HOME