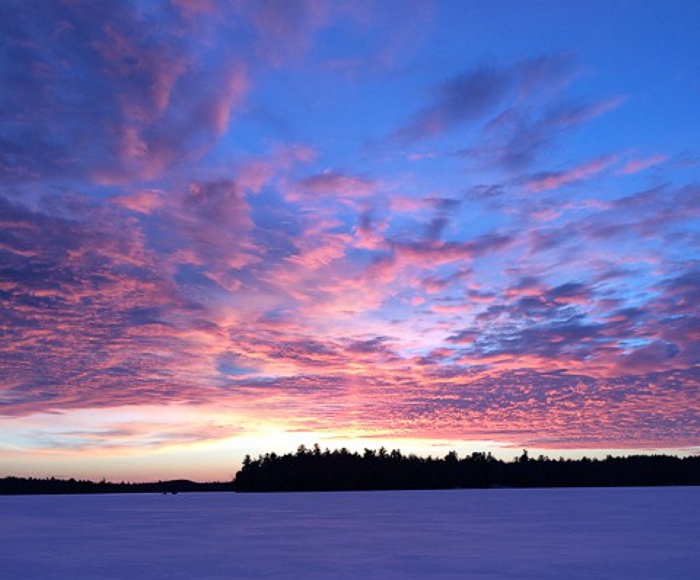 This photo was sent to me by my cousin Bob Tupper. He lives in northern Wisconsin near the town of Minocqua, around latitude 46° (closer to the pole than the equator, as Minocquans proudly proclaim). It shows the view to the west across snow-covered Pine Lake shortly after sunset. The air temperature is well below freezing. The photo is reproduced here with Bob’s gracious permission. Click on it to see a larger version in a new tab.

He originally asked about the vertical streak of light visible near the center, just above the now-set Sun. I answered that it was a typical Sun Pillar and referred him to this post from 2007 which explains the phenomenon.

Bob also sent me a Google Earth view of the Pine Lake area, carefully diagramming how the photo was taken. North is at the top. You can see that he “located” the Sun Pillar just beyond the tree-covered peninsula, about a kilometer (3300 ft) from his camera. Click on the thumbnail below to see that map. 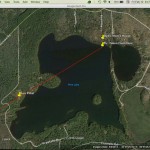 You can certainly measure the direction to a Sun Pillar, in this case azimuth ≈ 240°. But its “location” with respect to the landscape depends on where the camera is. Observers scattered over a wide area would all see the Sun Pillar at different points along the horizon, depending on their perspective. And you can’t really specify the distance to a Sun Pillar any more than you can a rainbow. If the Sun Pillar is “anywhere” it’s in the ice crystals you read about in the above link. Those ice crystals are probably falling from the denser clouds near the horizon, maybe 4-5 km distant.

However, there’s another interesting optical phenomenon in this photo worth noting. It’s the “blue snow” covering the lake. Snow should be white, right? And normally that’s how (clean) snow looks during bright daylight. Snow, either packed or fluffy, is a collection of ice crystals that diffusely reflect any light that hits it. What we receive from the Sun is technically “yellow-white” light, but to human eyes it’s essentially white — a mix of all colors in the spectrum.

If you go out at night and look at snow it will appear “less than white” or “gray” when lit by only the stars. But if there’s a bright Moon up, or if you have a flashlight, or have turned on some outside lights, the snow will appear its usual white. That’s because moonlight is reflected sunlight, and artificial lighting is designed to produce “white” light like the Sun.

Something different is happening here though. The Sun has set, along with its direct “white” light. Note the deep blue color of the sky. The only light available to illuminate the snow is blue and violet. That’s because of Rayleigh Scattering, which is explained in this post. So the snow looks blue, with maybe a hint of violet, as would a sheet of white paper.

If you brought out a flashlight and used it to illuminate the “blue snow,” the snow where the light hits would appear its usual white color. Outside that spot of light, the rest of the snow would still look blue. The perception of color by human eyes depends not only on the intrinsic properties of an object, but also on the color of light illuminating it. The classic example is a red apple illuminated with blue light, or a lime illuminated by red light. The fruit would appear “black” in both cases, but only in an otherwise darkened room. Got fruit? Try this simple experiment!

You can get pure colored light from lasers, LEDs, and well-filtered white lights. That light is intrinsically one specific color. But the perceived color of everyday objects is a function of chemical pigments in the materials they are composed of, as well as the color of light illuminating them. Pigments selectively absorb and reflect certain colors of light. You can see a nice lesson on that here.

Question: What “color” is snow in a totally dark room?  Answer: Black.

Next Week in Sky Lights ⇒ What LIGO Proved