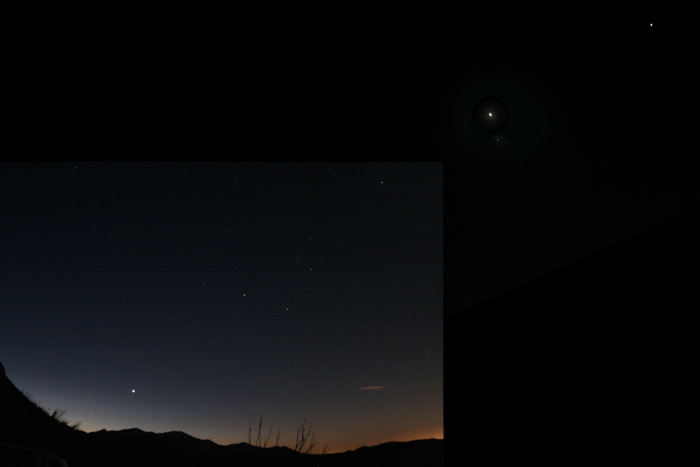 I posted the sky chart for this 5-planet alignment last week, hoping a lot of you would have an opportunity to observe it. Arizona was having some bad weather, but I got lucky. After waking up early several days in a row and seeing nothing but clouds, we had a brief respite that allowed me a couple attempts. My first was not so good. My second (above) worked out about as well as it could.

All five planets visible to the naked eye (Mercury, Venus, Mars, Jupiter, Saturn) were lined up in the morning sky, and a waning gibbous Moon joined them last week. Actually, if you looked down, a 6th planet was visible. You can see the silhouettes of its mountains in my photograph. These “grand alignments” (as they are called) are not that rare. They occur roughly every 20 years — sometimes in the morning, sometimes in the evening.

If you need help identifying the planets and stars in the image, here’s an annotated version. Click to enlarge: 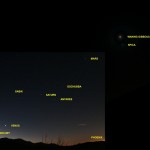 My first attempt was a fail, largely due to clouds that prevented me from ever seeing all five planets simultaneously. I also learned something about my fisheye lens that’s worth sharing. But before we get into that valuable lesson, click on the thumbnail below to see my first attempt and what went wrong. It’s also a large image (1728 x 468). 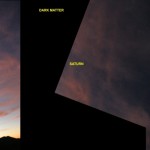 So here’s the specs for all you photographers:

And here’s the valuable lesson I learned. Disclaimer: I am not a professional photographer. I purchased my 8.2 Mpx Canon EOS 20D in 2004 (its initial release) for $1500, replacing a 1.1 Mpx Sony Mavica that recorded images to floppy discs. When I bought the Canon, I sold my Olympus OM-1 film camera and committed to the new world of digital photography. I’ve been taking photos with that Canon for 12 years, know all the functions, and am totally satisfied with its performance.

I’ll leave those formulae intact for future reference, as they work well for most lenses. But for a fisheye lens, the complex design (up to 12 optical elements) requires a different optical model. The equations are similar, using the same symbols, but the inverse-sine function replaces the inverse-tangent:

Different fisheyes diverge slightly from this strict mathematical model (one of four used for fisheye design). And that includes the K2. I know for a fact that its FOV is close to 102° (4% larger than the model predicts) because I “measured” it experimental when I photographed this double rainbow. Double rainbows have a fixed diameter of 102° (the more-common single bow is 84°). And as you can see, that double bow just barely fits in the FOV. Obviously, the camera was tilted to utilize the full diagonal FOV, and the image was later cropped.

I never noticed that FOV discrepancy until I really needed a fisheye — this grand alignment spanned 113° degrees of sky. How could I not have noticed the double rainbow filled the FOV (making it clearly less than 180°)? Total scientific fail there. Imagine my frustration when shooting these photos. No matter how I oriented the camera, I could not get all five planets in the same FOV. That’s when I knew I needed to do some research, and that’s why my second attempt still had to be a composite image.

Lesson learned. That’s the way science works. Sometimes you get burned, but you always learn — IF you’re curious enough to track down an explanation of what puzzled you. I now know all about crop sensor optics. But I’ll work with that limitation. I could get a Canon fisheye that would provide a full 180° FOV, but they cost $1250. I bought the Zenitar for $250 on eBay. It has its weaknesses but it’s good enough for me. At least it can fit a double rainbow.

Next Week in Sky Lights ⇒ The Palettes of Sunset