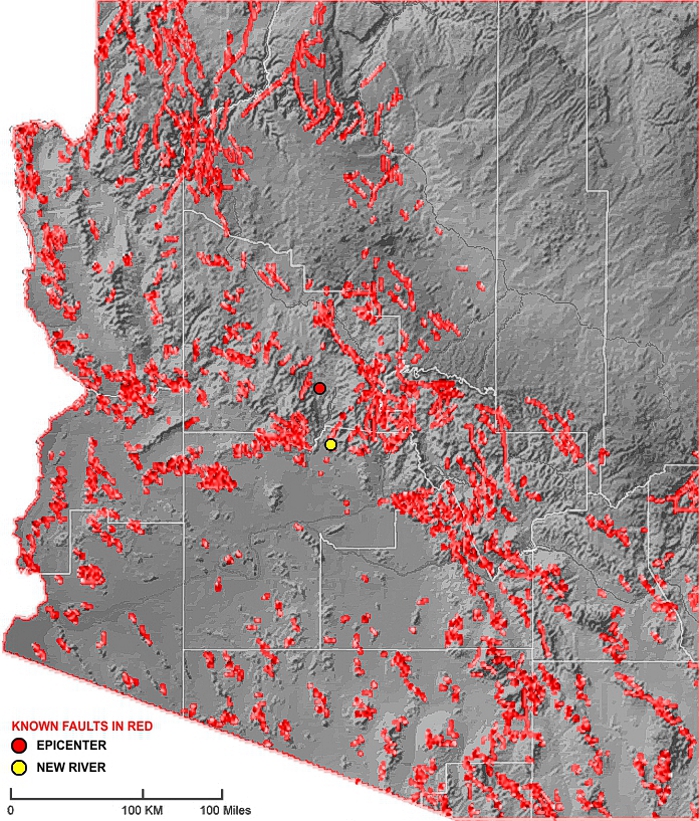 Question: I heard you had an earthquake in Arizona yesterday. Did you feel it? How big was it? Did it do any damage? Isn’t Arizona a low-risk area for earthquakes? — Family, Friends, and Colleagues in many different locations.

Answer: So many of you asked about the quake that I decided to do a post about it. It’s a little out of the normal scope for Sky Lights, and it runs a little longer than most posts, but it definitely falls into the category of earth science. Plus, it turns out to be an interesting story about how I used science to solve a puzzle.

The graphic above is a composite of a topographic map of Arizona, and an overlay (in red) showing the known faults. Both maps are courtesy of the USGS. The epicenter of the quake and my location (marked by red and yellow dots respectively) are separated by a distance of about 40 km (25 miles).

I was up late that night watching TV at low volume. Around 11:20 pm MST I heard (and also felt) a low rumbling sound. What I felt was around 10 Hz (vibrations per second), and what I heard was an audible harmonic of maybe 100-200 Hz. Both vibrations ramped up quickly and sustained for around 30-45 seconds, then faded away. My first thought: It was a low flying chopper. They often cause the whole house to vibrate — but I didn’t hear any of the usual engine noise.

My second thought was that it might be the subwoofer in my home theater system, which easily produces effects like that, but by the time I grabbed the remote and hit mute the effect had stopped. So I backed up the DVR to before where it started and played it back. The effect did not repeat.

That’s when I was sure I had just experienced my first earthquake. Very strange sensation. Ground displacement couldn’t have been more than a couple mm (1/8″). But it was enough to get my attention. I walked around the house looking for any damage, but Heimhenge is built tough, with lots of rebar in its solid-grouted concrete block earth-retaining walls. However, it sits directly on bedrock, so any vibrations in the earth will be efficiently transferred to the house. If it was sitting on footers in regular soil, I might not have felt anything.

Interestingly, while inspecting the house for damage, I saw a rack of pool balls awaiting a break on my table. They had separated from their usual tight grouping. Photo below, click to enlarge: 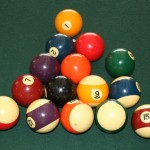 You can see they didn’t move much, but as I said, the ground displacement was a few millimeters tops. That massive 8 ft slate table is essentially “attached to the house” which is itself attached to the earth. Put some low-friction smooth spherical balls on it, and what you’ve got is basically a seismometer. If there’s any gaps between any balls (and there always is) they’ll move slightly and rebound and scatter.

Then I went to ask my wife Sandi if she had felt it. She’d been asleep on a bed (which reduces the transfer of vibrations). She also had our white noise generator running in “random surf” mode. So the quake was not intense enough to wake her. That’s when I went online to see what I could find, but it was too soon to get any news in the feeds.

As long as I was online, I did some research about quakes in AZ. We’re not considered to be at risk for quakes in this state, and no special building codes exist, but I did find this historic map of quakes in AZ that surprised me. There’s been quite a bit of seismic activity in this state since records began in the 19th century. 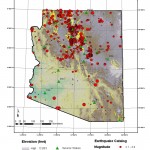 I had no idea we had so many faults in Arizona. The good news is that the maximum energy released by a slipping fault is proportional to the length of that fault. Compared to CA, AZ has some pretty short faults. There are other factors (like soil type), but fault length sets the maximum energy limits.

The largest earthquake ever recorded in Arizona was magnitude 5.60, with an epicenter close to the Arizona-Utah border. That was on July 7, 1959. It caused minor structural damage in Fredonia, AZ and Kanab, UT (chimneys, walls, windows, dishes falling from shelves). A rare rockslide at Mather Point in the Grand Canyon was attributed to the shock.

While I was online, the second quake hit. It was half the strength and duration of the first, but definitely the same effect. And by this time the TV was off. They tell me there was an even weaker quake about 2 hours before the first one I felt, but that would have been during the Green Bay vs. Denver football game. We were (of course) watching at a high volume, so we didn’t hear or feel anything. All the quake details came out on CNN the next morning.

The epicenters were northwest of Black Canyon City. The first quake was only magnitude 3.2, so I’m not at all surprised we didn’t feel it. The second quake registered 4.1. The third was 4.0, but at a greater depth (which reduced the surface effects). Magnitude attenuates over distance, and seismologists say if it’s less than 3.0 most people won’t notice unless they are in a very quiet environment.

They also say that when you experience your first earthquake, there’s always a certain element of “terror” that is perfectly natural, regardless of the quake’s magnitude. Most humans are just not used to feeling “solid” ground moving by whatever amount. That’s why “shaking floors” are a popular feature in “haunted houses.” I felt a moment of that “terror” but had already launched into scientific mode trying to determine, as they say, “What just happened?”

Supposedly animals can sense and react to these low frequency vibrations before humans detect them. Our 4-year-old German Shepherd Cassi was sleeping on the floor next to me and didn’t seem to notice. But then, she’s gotten used to helicopters flying over the house, so sounds and vibrations no longer spook her.

I spent some time on the AZ USGS website the following week to learn more about what causes earthquakes in Arizona. The state sits entirely on what is called the North American tectonic plate. In California, that plate is sliding south relative to the northward moving Pacific Plate. The movement averages about 35 mm (1.4 inches) per year. As the two plates stick, build up stress, and eventually slip, large earthquakes can be generated that are sometimes felt in Arizona. But for quakes that originate here in Arizona, different mechanisms are at work:

Seismologists tell us that when the “big one” hits in CA, we’ll certainly feel it here in AZ. Once I realized I had felt my first earthquake (in 36 years of living here), I went back to the TV to check out the news. I was fearful I’d see live coverage of total devastation in LA. Fortunately, that was not the case. That’s what started me researching quakes in AZ. And as I learned, although they are rare, and never that large, we do indeed have earthquakes in this state.

Next Week in Sky Lights ⇒ Contrails vs. Chemtrails

Not All Clouds Have Silver Linings
Q&A: Contrails vs. Chemtrails
HOME