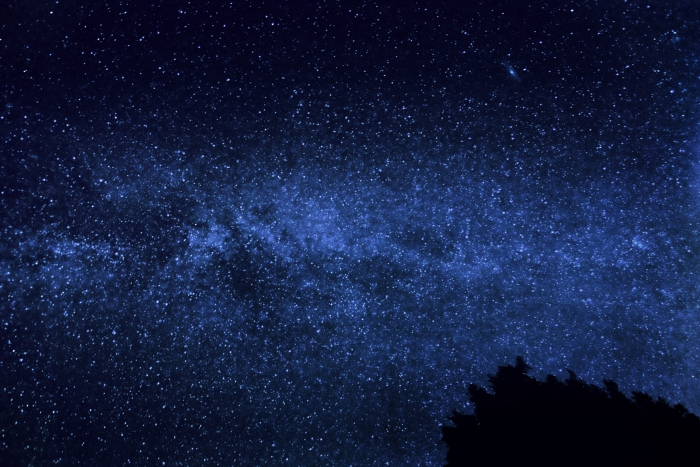 Question: We live in a large city, and had never seen the Milky Way until our recent trip out west to the Grand Tetons. First, there were way more stars than I can normally see. But there was also this cloud-like streak of light across the sky. The park ranger told us it was the Milky Way, but wasn’t able to explain just what it was. Can you help? — RJ, New York

Answer: Certainly. It’s a topic I’ve written about before. See, for example, my Sep 8, 2004 post. Or my Aug 24, 2005 post. But those were back in the grayscale newsprint era, before Skylights went “live” online. I can do a better job now in full color with external links. The photo above shows the Milky Way as seen from a dark location — away from the effects of light pollution. You won’t see it at all inside New York, even from the middle of Central Park. In fact, many urban residents alive today have never seen the Milky Way.

The thumbnail below shows the Milky Way from an even darker location. This was a long exposure that brings out more detail and structure. In addition to even more stars, clouds of dark and bright gas are clearly visible. Click to enlarge. 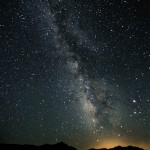 Of course, we see our galaxy from the inside. Much of our view is blocked by dust and gas. There are many models of our galaxy based on indirect measurements. See this example. But the basic structure of the Milky Way is similar to that of galaxy NGC 6744, shown in the thumbnail below. Photo courtesy of ESO. Our Sun (and solar system) is approximately indicated by the yellow dot, 2/3 of the way out from galactic center. 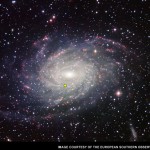 We all know our galaxy is a vast disc of stars that we view from an internal position. When you look up at the Milky Way, is that how you see it, or do you unconsciously invert it, pasting it like a concave decal to the inside of a hemispherical celestial dome? This is a reversion to the Aristotelian concept of the night sky as a crystalline sphere. So let’s smash it.

That illusory concavity is not the way the star stream bends. The illusion is due to the horizon’s geometric delineation of the celestial hemisphere. It is, however, possible to eliminate this effect. Next time you enjoy a dark sky view of the Milky Way, try removing the horizon by viewing through cupped hands. Of course, the fewer the tall obstructions the wider the possible view and the better the effect. Notice that as you move away from Sagittarius (galactic center) the average star density decreases. Now, in your mind’s eye, just bend it the other way into a convex shape — the same way you make that classic staircase illusion flip up or down. Click on the thumbnail below to see that illusion full size. You should be able to invert it in your brain, and perceive either wall A or B as closer than the other. 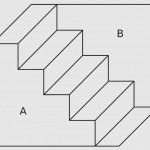 Can you now “see” the starry disc in which we are embedded? This would be an easier exercise from a high Earth orbit, where 360° of the Milky Way surrounding us is visible, along with a continuous brightness/density gradient (brightest toward Sagittarius, dimmest in the opposite direction). Unfortunately, most of us must be content with ground-based observations. That means Earth will always block 180° of our view. Fortunately, the power of our imagination can augment what we “see” with our eyes. The brain is an integral part of the human visual system.

The sphere of stars that surrounds us is essentially infinite. Stars that appear near to each other may be light years apart, and aligned only by chance. Some are true double stars, orbiting each other at the same distance from Earth. But to the eye, the celestial sphere appears as a 2D display on a 3D dome. In some ancient cultures, the size of this “dome” was estimated to be 10-40 meters above the ground. We now know the celestial sphere extends to at least 4000 light years, and contains around 5000 stars visible to the unaided eye.

The rest of the Milky Way’s estimated 100 billion stars are either too distant to be seen, are blocked from our view by dust clouds, or are on the day side of Earth and invisible (except during an eclipse of the Sun).