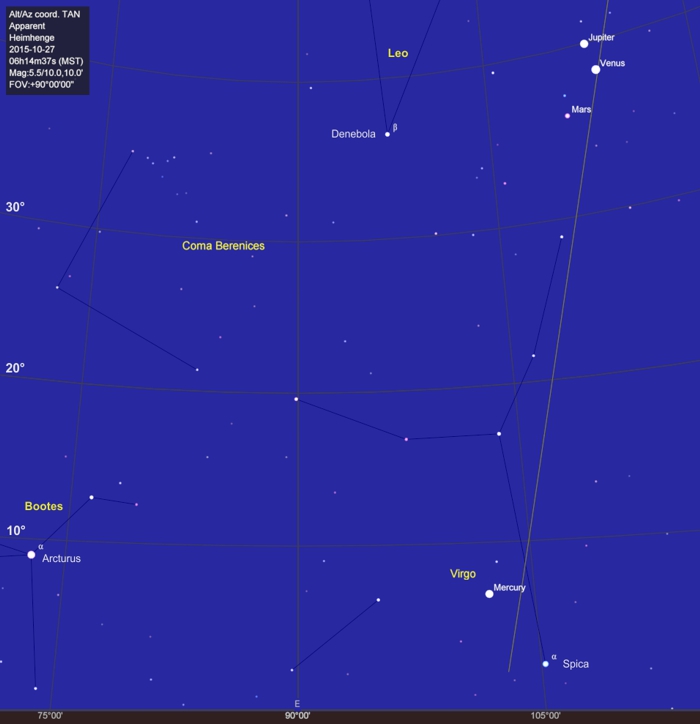 There will be a very close conjunction of Jupiter, Venus, and Mars over the next few days. Jupiter and Venus will be about the same brightness, Mars dimmer. After the end of the month the trio will start drifting apart. The planet Mercury will briefly join the show, but it will be low in the sky — a mere 7° above the horizon. You’ll need an unobstructed view to the east to see it, and even then, the breaking light of dawn will reduce Mercury’s visibility.

Sometimes it’s nice to have a few more pixels to work with, so if you’d like to see the above graphic at full size (956×989) just click on it and the larger version will open in a new tab. This sky chart was created using the free and open source digital planetarium software Cartes du Ciel.

If your daily routine has you awake before sunrise, take a look toward the east to see this beautiful grouping of celestial objects. If not, you might consider setting your alarm and rising early. A similar (but closer) conjunction of these three planets happened back in 2-3 BC, and is one of several hypothetical explanations for the “Star of Bethlehem.”

And if you have binoculars, take a closer look. Mount the binoculars on a tripod (if available) to hold them steady. All three planets will show visible disks. Jupiter will show its banding of colored gases, and some of its moons. Venus will show a slightly gibbous phase with featureless white clouds. Mars will be tiny, but it’s reddish color should be obvious. If you have a telescope, set it up the night before so it’s ready to go in the morning and you’ll see even more. Still, even using just your unaided eyes, this conjunction is well worth checking out.

Next Week in Skylights ⇒ Smashing the Crystalline Sphere